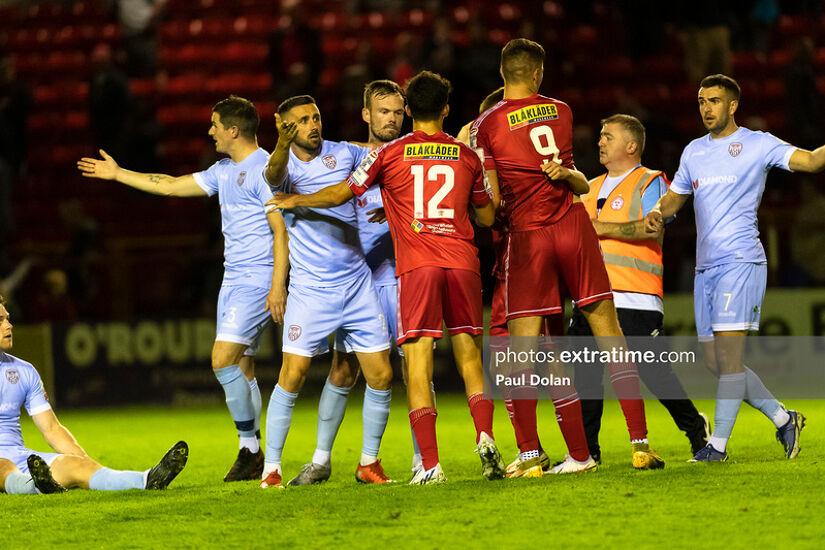 Derry City will be looking to bridge a 10-year gap since their last FAI Cup success on Sunday afternoon, when they take on Shelbourne at the Aviva Stadium (kick-off is at 3pm).

The Candystripes come into Sunday’s decider off the back of a disappointing end to their 2022 Premier Division campaign, however they can be pleased with the progress they made overall.

Ruaidhrí Higgins side pushed eventual league winners Shamrock Rovers all the way in the league, and also sealed their place in the showpiece final with a semi-final win against Treaty United.

But they now have their sights on silverware to round off a breakthrough season under Higgins.

“I do (believe the cup can be a springboard) because I was part of the Dundalk team in 2014 when we won the League Cup,” the Derry City boss said earlier this week.

“I know it’s not the FAI Cup, but it was a trophy but it was sold as their first trophy in a while and it gave us a springboard. Cork were chasing Dundalk for a long time and got over the line (in the FAI Cup).

“Shamrock Rovers were chasing Dundalk for a long time and then won the cup (in 2019) and it was a catalyst for them. There is no reason why that can’t be us. We are an ambitious club and we are progressing.

"Ultimately, we want to come down here on Sunday (to the Aviva) and win the cup, but we know we are coming up against a really good side.”

Derry City will be without midfielder Sadou Diallo for Sunday’s finale, with the ex-Man City youngster suspended.

Like Derry City, Shelbourne have enjoyed a productive 2022 campaign under the stewardship of Damien Duff.

Taking over the reins of the Reds from former boss Ian Morris, Duff ensured top-flight survival for Shels, and also steered them to their first cup final since 2011.

So far in the cup, Shelbourne have seen off Bray Wanderers, Bonagee United, Bohemians and Waterford.

“When you come here, your national stadium, there’s no greater moment,” Duff said to his club’s in-house media channel ahead of Sunday’s game.

“I brought the guys here on Monday to make them familiar, they won’t admit it, but I would say a few hadn’t been here, a few certainly hadn’t been pitch side and what have you.”

He then added: “I said at the start when I took over the gig I was scared. I said no because I didn’t back myself, but in the end I took it.

In terms of team news for Shels, Matty Smith is unavailable to play against his parent club.

Conor Kane is also injured, while there are major doubts over the fitness of Shane Farrell. Farrell’s involvement in the game is subject to a late fitness test.

Shelbourne won just once against Derry City during the 2022 Premier Division campaign, and have lost twice. The pair drew at the Ryan McBride Brandywell Stadium in their most recent encounter.

Derry City are winless in their last four games, drawing two and losing two. In their most recent league game, City were defeated by Dundalk at home but retained their place in second thanks to a superior goal difference versus the Lilywhites.

Shelbourne have not won an FAI Cup since 2000, and their most recent appearance in a final came in 2011. The Reds lost to Sligo Rovers on that occasion after a penalty shootout.

Meanwhile, Derry City have not been in a cup decider since 2014, when they lost to St Patrick’s Athletic at the Aviva Stadium. They most recently won the trophy in 2012 against the same opponents, however.