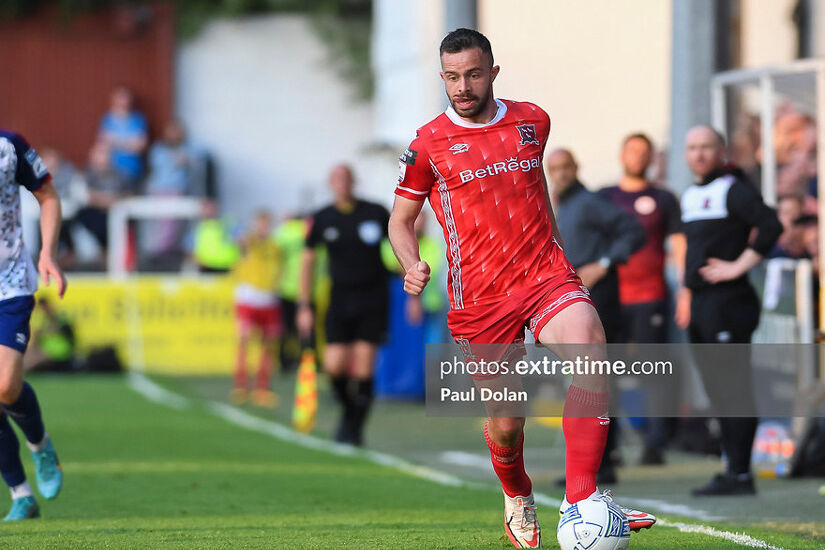 Dundalk are through to the FAI Cup quarter-final after an action-packed battle with Wexford in Ferrycarrig Park on Friday night.

A winning penalty from Robbie Benson in extra-time sealed the victory for the Lilywhites after a gripping five-goal thriller.

The home side started the game well, with several chances in the opening stages of the first half whilst Dundalk found their feet. Nathan Shepperd was the busier goalkeeper when early chances from Wexford’s Eoin Farrell and Ger Shortt put him to the test.

The home side were excellent in possession and Conor Crowley had some fantastic runs down the wing; his chances on goal ultimately falling to the safe hands of Shepperd.

Dundalk soon became dominant on the ball, with some excellent passing and gripping runs into the box. David McMillan having the best chance for the Lilywhites around the 15 minute mark, his attempt safely kept at bay by Alex Moody in the Wexford goal.

Dundalk began to put the pressure on the Wexford defence, skipper Joe Manley doing a fantastic job by clearing any attempted shots and defender Paul Cleary working tirelessly to keep the away team from scoring.

Shortt had a fantastic chance for Wexford on 26 minutes when Crowley played in a welcoming ball which only needed a tap-in to make it 1-0, but Shepperd got his hands to it just in time.

It was McMillan who broke the deadlock in the 38th minute after some excellent build-up play from the Lilywhites. The ball was tucked nicely to the back of the net past Moody, giving the visitors a 1-0 lead going into half time.

The second half was just as energetic as the first, both teams having early chances; Wexford’s Jordon Tallon driving the ball over the bar after a determined attempt from a free kick. Len O’Sullivan also had a chance soon after when he was left in plenty of space to run down the wing but Dundalk were quick to close him down.

A similar scenario soon followed and it was Luka Lovic who took the chance in the space provided, the Dundalk defence cracking under the pressure to open up and allow Lovic through, making it 1-1 on the 55 minute mark.

It took just ten minutes more for the home side to take the lead when Manley played a beautiful chip into Shortt who was being chased by three defenders but he calmly placed it into the bottom right of the net. Dundalk continued to press and although Wexford appeared to be the more energetic of the two, the away side levelled the score with 15 minutes to go.

Ryan O’Kane took an opportunity to place it into the net after a scramble in the box. Both teams had their chances to take the lead in the last ten minutes, but the game went to extra-time with the scoreline stuck at 2-2.

Both teams were eager to get a goal as quickly as possible going into extra-time, gifting both sets of fans a spectacular display right up until the final whistle. Dundalk’s second half substitute Ryan O’Kane looked threatening throughout the half, Wexford’s Eoin Farrell doing well to keep any potential shots at bay.

The winning goal came in the 109th minute after Robbie Benson breezed it past Moody from the penalty spot, after the home team awarded the visitors the chance to take the lead when Thomas Considine brought down John Martin in the box.

The Lilywhites kept their cool for the remainder of the game and go through to the quarter-finals of the cup. Wexford will continue their quest for a play-off spot in the First Division next Friday night when they meet close rivals Waterford United in Ferrycarrig Park.

Vera Pauw: ‘It was one of hardest thing I’ve done in my life but also the best thing. People do not realise the impact that it has on a woman’s life, if you keep that inside.’ https://t.co/LBnS2hYeS8 pic.twitter.com/uO19emP3s5