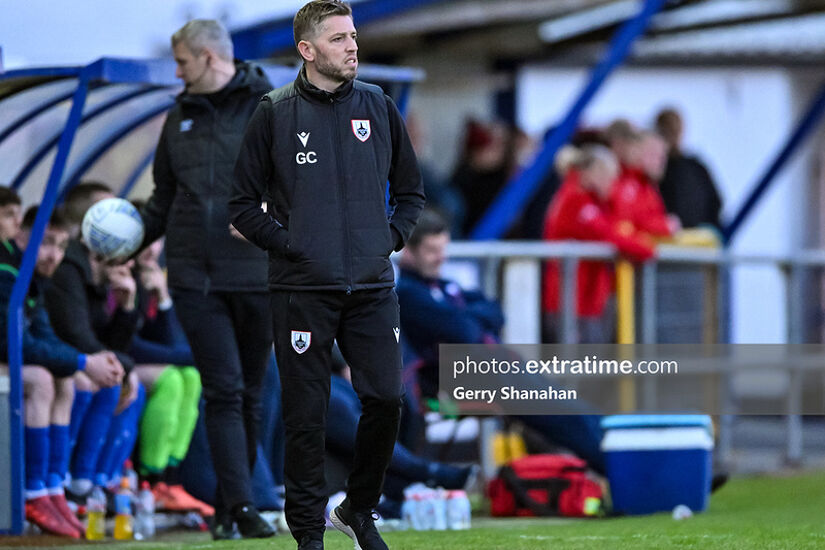 Gary Cronin will be looking for his side to pick up all three points as they host Cobh Ramblers Credit: Gerry Shanahan (ETPhotos)

Longford Town host Cobh Ramblers at Bishopsgate on Saturday night (7.30pm KO) hoping to stretch the gap between themselves in fourth position and Treaty United in fifth to six points.

Gary Cronin's side suffered a heavy FAI Cup defeat at Oriel Park last weekend, however they will be looking to put that defeat behind them quickly as they seek a return to the Premier Division.

Recent signing Jordan Adeyemo, brought in to replace the departed Rob Manley, has already gotten off the mark while the attack minded Adam Verdon replaced his sibling Sam last week to get his Longford Town career up and running.

After a whirlwind start to their league campaign which included one defeat in their opening nine games, the Midlanders have suffered two losses in their past three games- including a home defeat to rivals Athlone Town. However, having taken three points from promotion rivals Waterford- courtesy of a late winner from Sam Verdon- in their last league game, the potential is in the squad to mount a strong end to their campaign.

Having seen the departures of the experienced trio of Lee Steacy, Ryan Graydon and the aforementioned Manley as well as a number of fringe players, Cronin has replaced them with a mix of youth (goalkeeper Colm Cox from Shelbourne, attacker Adam Verdon from UCD and winger Kian Corbally on loan from St Pat’s) and a more established cohort including Darren Clarke, Brandon McCann and the electric Jordan Adeyemo.

With the return to full fitness of sharpshooter Christian Magerusan, the Black and Red possess the firepower to mount a serious play off challenge and tonight’s encounter with Cobh Ramblers, against whom they have already recorded a brace of league victories this season, may be a good opportunity to kickstart a final push and build momentum for the play offs.

For their part, Cobh have had a difficult league campaign so far with just three wins on the board from their 24 games. However, one of those was their most recent encounter with Bray Wanderers whom they defeated 3-1 at St Colman’s Park courtesy of an own goal, Jason Abbott and Darragh O’Sullivan- Connell.

New boss Shane Keegan has added to the squad with the recent returns of Paul Hunt and Charlie Fleming to offset the departures of Andy O’Donoghue and Ben O’Riordan. Another addition to the squad is Waterford Academy product Liam Kervick who has arrived at St Colman’s Park in a loan deal for the rest of the season.

Speaking to his club’s media team about the upcoming game against Longford and the squad’s new arrival, Keegan stated

“If we can keep delivering performances you’d be hoping it’s a chance to pick up some points. We’re moving in the right direction but we’re not getting carried away. Defensively we’re looking better, it’s now time to look a bit more at the other end of the pitch. There’s a lot of options in the squad for us, players pushing for places and it’s a positive dilemma to have.

Liam is a tricky winger, it’s another body in the final third to give us options. He’s young and learning the game but this is a great environment for him now until the rest of the season”.

In team news, goalkeeper Sean Barron remains out of contention due to injury while defender Harlain Mbayo is suspended.