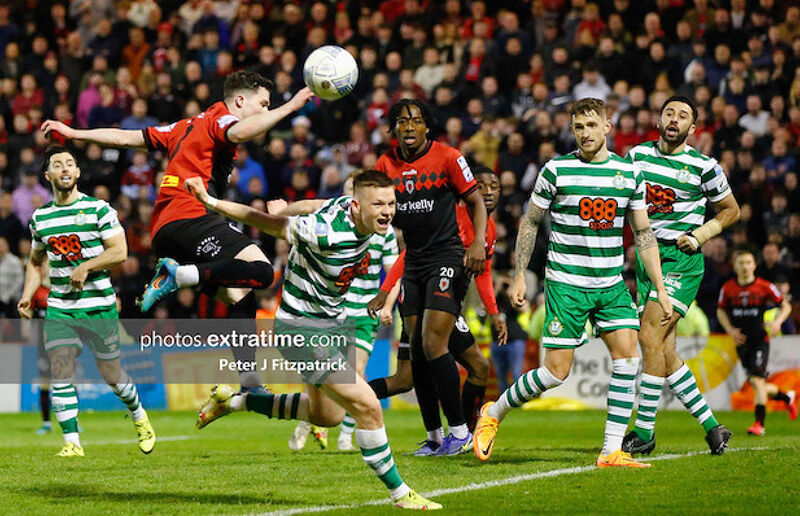 It’s the third Dublin Derby of the season as Shamrock Rovers play host to bitter Dublin rivals Bohemians on Friday night at Tallaght Stadium with kick off at 7.45 pm.

The Hoops will be looking to bounce back from last week’s 1-0 defeat away to Dundalk that reduced the gap at the summit to five points while the Oriel Park side now have a game in hand.

Tickets have been like golddust for this game, selling out earlier this week, with the match to be played out in front of a 7,500 crowd.

Rovers boss Stephen Bradley wasn’t at Oriel Park last week as he deals with his son’s illness but he is expected to be back in the dugout for what is a big four days for his side – they travel to Inchicore on Monday to tackle St Patrick’s Athletic.

“We’ve seen that their attacking players are a threat and can cause problems for anyone, we know that and have to l respect it and make sure that we are ready for it, and then impose ourselves on them as soon as possible,” explained Bradley in his assessment of Bohs.

The defending champions were without a number of players last Friday and Bradley has confirmed that tallismanic figure Jack Byrne will miss out once more – although he is expected to be available for selection on Monday. However former Jodi Stand favourite Danny Mandroiu will be fit to face his old club and Graham Burke has returned to training.

The Gypsies head into Friday’s game looking for their first Dublin Derby points of the season following 1-0 and 3-1 losses to Shamrock Rovers earlier this year.

Keith Long’s charges will be buoyed by a 1-0 win over Shelbourne last week where they held out for more than half an hour with ten men after Ciaran Kelly was controversially dismissed.

Bohs kick off in sixth place and can move above Sligo Rovers into fifth if they win and other results go their way.

Despite their inconsistency this season the Phibsborough side can move to within five points of the top three with a game in hand.

Bohs will be looking for their first league win at Tallaght Stadium since August 2018 when an Eoghan Stokes strike gave them all three points.

James Talbot looks set to be absent again with Tadgh Ryan continuing in goal while Kelly will serve a suspension for his red card last week.

Daniel Mandroiu, Andy Lyons and Pico Lopes will be lining out against their former club while Max Murphy will be looking to get on over on the Hoops when he lines out for Bohs. He scored an own goal when the sides last met in Dalymount Park.

Bohemians are looking for back to back wins for the first time this season.

Rovers are looking to avoid back-to-back defeats for the first time this season. They haven’t lost a home league fixture for over a year – Sligo’s 1-0 in May 2021 was their last domestic loss in Tallaght.