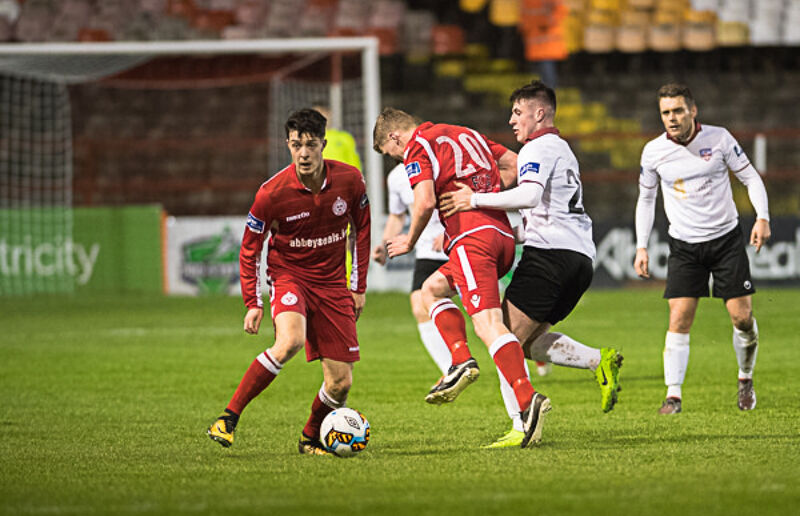 Alan Murphy was captain of the Republic of Ireland Schoolboys team as well as their player of the year in 2000, set a domestic transfer record four years later, and played for Galway United, Mervue United, Shamrock Rovers and Derry City.

He coached the Tribesmen's under-19 squad, was part of Mayo GAA squads which reached All-Ireland senior football finals and is currently teaching at ‘The Bish’ in Galway as well as coaching the Galway United under-17s and playing with Shane Keegan’s senior Galway United side.

It’s fair to say he knows a lot about juggling education, employment and soccer.

Having made his Galway United bow while still in secondary school, the Ballinrobe student drove himself to training as soon as he obtained his licence as a seventeen year old.

Speaking to extratime.ie, he explained the effect soccer had on him as a teenager.

The extra year paid off as he skippered the national side as well as picking up the Player of the Year trophy, before commencing a degree in Law through Arts in NUI Galway.

“At this stage I was a first team player and became good friends with Mark Herrick who was coming to the end of his career and decided to go back to college so we used to sit together on the bus on away trips and pretend to be studious!”

Incidentally, Herrick has gone on to design an anti-concussion training aid for helping soccer players with the aerial aspect of their game

Murphy lit up the league before Gavin Dykes and a €22,000 transfer fee brought him to Derry City in the summer of 2004.

He achieved success at the Brandywell, notably scoring in their 2005 League Cup Final win, but failed to replicate the heights of his Galway feats and returned to the Tribesmen in 2006.

He speaks candidly about the difficulties of being a full time player with nothing other than soccer to focus on.

“I found it hard just training in the morning and having nothing to do for the rest of the day, I always like to be doing something.”

Off the field, Murphy’s girlfriend at the time (now his wife) was based in Dublin so there were many trips between the two cities during his Brandywell period, which provided a League Cup courtesy of a 2-1 victory over UCD – the Mayoman netted the winner in the final.

However, despite the bumper contract on offer and the lure of European football, Murphy felt a desire for a return to Galway where he took a job in the financial sector and continued his goalscoring form over the next couple of seasons.

This led to another move away from the west, Shamrock Rovers signing the frontman for the 2009 season. However, ultimately the move didn’t work out and Murphy returned to Connacht in the summer with Galway United once more.

Following the club’s demise – he won Player of the Year in their final season – the Ballinrobe native signed for Mervue United before retiring in 2014.

Off the field, after three years of banking, a H. Dip. was obtained through NUI Galway and he took up a teaching position in St Joseph’s College secondary school in Galway city prior to the Mervue move.

Building on this, he is the current Connacht Schoolboys Manager as well as coaching Galway’s under-17s since 2016.

“I regard myself as full time now- it’s a pity I didn’t have this earlier in my career.”

He is quick to point out the importance of education for younger players.

“Anyone who has made a career out of the League of Ireland either had to go abroad or straight into the media.

“It’s now nearly a given that education comes first [when it comes to the Under 17s]. At Galway [with the senior team] we’ve a lot of lads who are at college and we’ve to work around that’.

“It’s a lot of pressure on these young lads but when you look at Galway United, they could end up churning out more educated locals due to the current situation with the club in the First Division.”

In his role as Connacht Schoolboys Manager, Murphy – in a similar manner to Leinster Schoolboys Assistant Manager Fintan Sheridan in a previous article – is full of praise for schoolboys international football and the interprovincial tournaments run by the FAI.

He cites QPR’s Ronan Manning and how “his move was on the back of his Irish Schoolboys format and he placed a serious focus on education.”

“At that age it shouldn’t be all about football, it should be about the balance of both education and football.

“At both Under 17s level and Schoolboys it’s easier to push them in the right direction as I’ve come through it myself.’

Speaking about his own experiences of football outside of the League of Ireland, the talented forward was honest in his appraisal of his trials experience.

“At 22 I didn’t have a huge amount of confidence bar the 90 minutes I was performing on the pitch, I hadn’t grown up enough.

“I found it difficult to go on trial at places like Burnley alongside the likes of David May and Robbie Blake and I ended up in tears before spending the next week at Aberdeen.’

He went on to talk about how players who stay in Ireland at least have a pathway now while those who return home from a spell playing in the UK often “don’t know what to do or where to start.”

Not all returnees are tarred with the same brush however as he cites the example of his former Derry City and Galway United team mate David Forde who had arrived back in the City of the Tribes from West Ham and had begun to make plans for a life outside football before making a name for himself under Stephen Kenny at the Brandywell – a successful period Murphy missed out on when leaving the club.

He also spoke, without regret, about having departed from Shamrock Rovers before their own European journey.

Indeed, stepping away from the league in 2014 provided the forward with a chance to showcase his skills in his native county for his local Ballinrobe GAA club where he ended up winning individual accolades.

He was also part of the Mayo county panel which reached two All Ireland finals – a chapter in his career bookended by major events in his life.

He missed his first league game with the club as he saved his father’s life after a heart attack, while he needed operations on his knee as his gaelic football career drew to a close.

At 36 years of age and “flying fit and looking forward to the next match,” his role on the field has drifted to a more defensive midfield role, though the hunger to net a few more goals to snare Galway United’s goalscoring record still inspires him.

“I was old before my time and I made decisions for off the field reasons. I’ve a settled job and earned respect from the pupils because of my career.

“It’s been such a journey, such a privilege and I think I’ve gone about things the right way for me.”