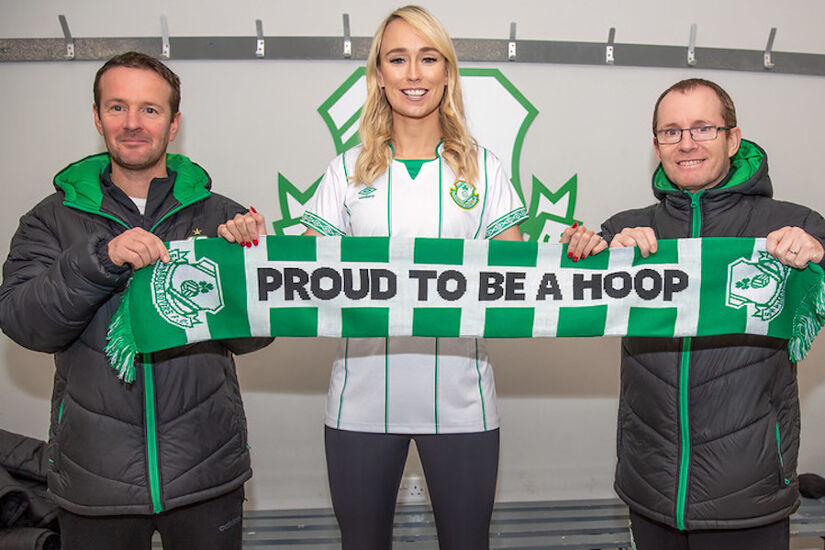 Collie O’Neill: ‘Shamrock Rovers are really backing it. Whatever the men have, the women are going to have. It’s not just a token because women’s football is doing well at the moment.’

After working under some notable League of Ireland managers, Collie O’Neill spent five years in charge of UCD and now faces a whole new challenge in leading the Shamrock Rovers women’s side, as Rovers return to the top flight of the women’s game in Ireland this season.

Rovers played in the inaugural Women’s National League in 2011/12 before withdrawing from the league at the end of the 2013/14  campaign. The club entered a girls side in the under-17 National League three years ago and added an under-19 team last season. In 2023 they will have a senior team in the League of Ireland Women’s Premier Division.

extratime.com caught up with the Hoops Head Coach to discuss the challenge of Rovers’ returning to senior women’s football and to trace his own managerial career. Coaching roles at Dublin City, Dundalk and Shelbourne preceded an assistant manager position with UCD, all of which led to being offered the Students’ top job in late 2014.

“I had the best education in the game – working under people like Dermot Keely. He is still the best I ever worked for. Guys like Dermot and Martin Russell, I’ve worked under some of the best managers in the league, but with contrasting styles. I took away the good bits out of both and then added my own thoughts in on top of it, which then defined my kind of coaching style.”

When the UCD managerial seat became vacant, O’Neill could justifiably feel that he was in the ideal place at the right time to step up and implement his own ideas in addition to all he had learned from others.

“I was at Shelbourne before that for three years and temporary manager there for three months after Dermot had left. I then went to UCD, as first assistant manager to Martin Russell and then Aaron Callaghan. Having been embedded into the UCD philosophy by that stage, it was the perfect timing and the right environment to become the main man for the first time.

"It is the place that allows you to grow, develop, make mistakes and not be punished too harshly for it. It’s the best place to go if you want to get better at something, as it gives you a great platform to go and do that.”

The undoubted highlight during O’Neill’s tenure came when the 2018 First Division title was attained by an exclusively young squad, in comparison to the previous campaign.

“The ideal thing with UCD was not that they were all in and around the same age, but they all had the same interests outside of football because they were all doing exams, college work and were more or less local, within the campus itself and more like a family. It’s the exception to the rule, as you’re not going to get that at any other club."

The following season in the Premier Division proved to be the Drogheda native’s last at the helm. UCD finished bottom of the table, with only five league wins and it was also a year that witnessed some board interference on playing style, an internal player suspension and a whopping 10-1 reverse at the hands of Bohemians.

“UCD never actually focused too much on the results. It’s about development and making sure that things are being done right within the club. I think any manager could lose ten games in a row and wouldn’t be under too much pressure and relieved of your duties ... It’s a different club in that aspect. When you have loads of other factors along with results, then that’s when it might come into play.”

Subsequent to departing Belfield, Collie became Technical Coach under Pat Devlin at Cabinteely, retaining his position once the Dublin club merged with Bray Wanderers. Nowadays, a different task has been accepted in the guise of leading Shamrock Rovers’ women’s side back into the national league, with an emphasis to give the players every chance of success, while playing attractive football.

“It’s basically a start-up. How often in your career do you get the opportunity to build a side from the ground up? You’re always talking over from a previous manager and coming into something that’s already been established. On this one, it doesn’t exist at the moment.

"You usually have to try and get three or four players in and out to improve the side, yet now can you go and sign a whole new group of 20 players ... That’s the exciting side of it. You can build and design it any way you want.

“Shamrock Rovers are really backing it. They want it as professional as possible. Whatever the men have, the women are going to have. It’s not just a token because women’s football is doing well at the moment. They see this as a long-term plan and want to make sure it’s done to the best of its ability.

"I arrived in September and only now do we get on the pitch for pre-season work. After a lot of time getting things ready, it’s time to work on the good style of play and philosophy that we want.”

Evan Ferguson ‘I'm trying my best when I get the shout from the gaffer and it seems to be going in at the minute’ https://t.co/SjhBlamPF2 pic.twitter.com/nAZRuk5qIo