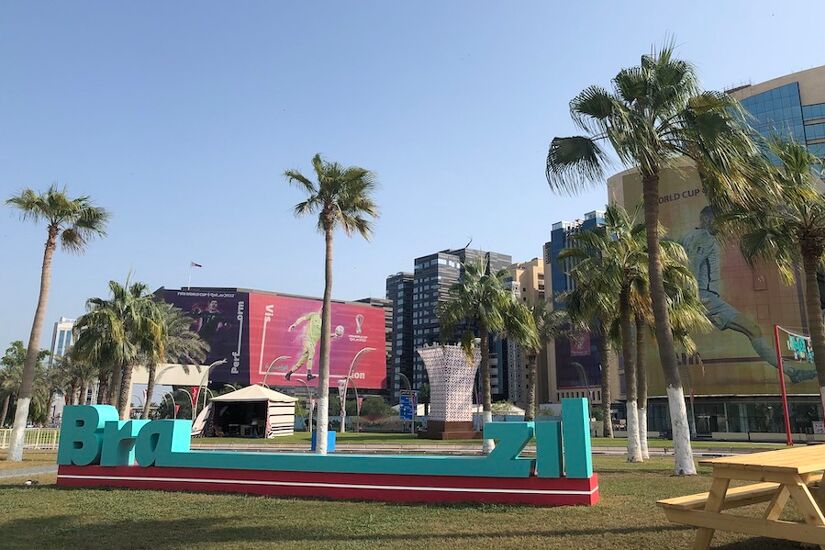 Brazil moved into the quarter-final with ease on Monday night Credit: None

Brazil cruised to a quarter-final tie with Croatia after defeating South Korea 4-1 in their last 16 clash on Monday evening at Stadium 974.

He joined an attacking four of Raphinha, Vinicius Junior and Richarlison, who were all rested in the 1-0 defeat to Cameroon last Friday.

Gabriel Jesus was left out of the side after suffering a knee injury in that defeat, with Alex Telles and Alex Sandro also missing out with injury.

Paulo Bento kept Hwang Hee-Chan in his team after his heroic last-minute winner against Portugal in their 2-1 group stage win.

Kim Min-Jae, who missed the last game with a calf injury, returned to the back four to face Brazil’s 4-2-3-1 formation.

It took just seven minutes for Vinicius Junior to score Brazil’s first of the night following a Raphinha cross into the box, which initially looked like it should have met Neymar who was waiting in the middle.

The PSG forward could not connect and so the ball fell to Vinicius, who side-footed it from the left-hand side into the back of the net.

Brazil looked comfortable even in the early stages and displayed plenty of tricks and skill to frustrate the South Korean defence.

Kim Moon-hwan attempted to clear the ball from the box in the 12th minute, but Richarlison got in the way leaving the defender with no choice but to kick out at the Spurs forward which led to the referee pointing to the penalty spot.

It was Neymar who stepped up to the task and, albeit spending quite some time shaping up to take the kick, eventually rolled the ball to the back of the net to claim his 76th Brazilian goal – just one behind Pele.

South Korea had chances of their own despite the early 2-0 lead from their opponents.

Wolves’ Hwang Hee-Chan attempted a curled shot from 30 yards out, but Alisson was alert and dived through the air to produce a superb save.

A rather exquisite team goal came from the Brazilians on the half-hour mark when Richarlison took possession and passed to Marquinhos, who then made his way into the box for Casemiro to pick up.

The latter split the defence with a pass straight to Richarlison who was running through the middle, before coolly slotting it home for his 20th goal for Brazil.

With ten minutes to go before half-time, the five-time World Champions extended their lead when Lucas Paqueta got on the end of a chip in from Vinicius to slide it easily past Kim Seung Gyu in goal.

An impressive and ruthless lead for Brazil, who scored more goals in that first-half than in their three group stage games combined.

They did, however, drop the intensity in the second-half and allowed South Korea more time on the ball as they sat back.

Rather surprisingly, there were no goals in the latter stages of the game until South Korea got a consolation with 15 minutes remaining on the clock.

Substitute Paik Seung-ho sent the ball rocketing to the back of the net after Brazil half-cleared a free kick, with the ball dropping to the midfielder who then struck it into the top right corner.

Brazil seemed a little shellshocked but responded by bringing on their third-choice goalkeeper, Weverton, and taking Neymar off the field after what was a fine performance from the 30-year-old.

Korea could do no more and it’s Brazil who will face Croatia on Friday afternoon in the quarter-final after the latter beat Japan on penalties following a 1-1 draw on Monday evening.