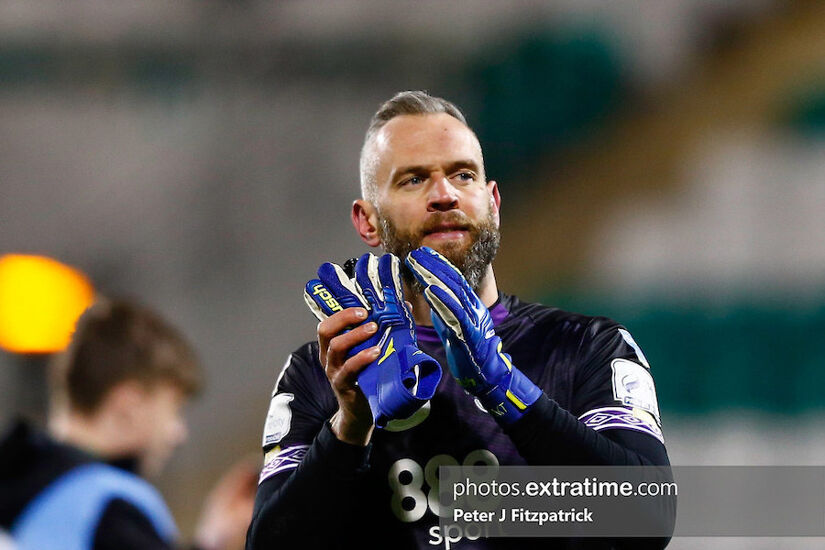 Having ended the 2021 season with a couple of niggly injuries, ones that were affecting him when he was playing with his kids, Alan Mannus felt certain that the 2022 campaign would be his last with Shamrock Rovers.

Mannus will move into coaching when he does retire but having had a restful break last Christmas, Mannus felt good as the season got under way and had second thoughts about stopping playing. He also reduced his training load by one game a week.

He explained, when speaking to shamrockrovers.ie, that having discussed the situation with his wife and then chatting with Hoops Head Coach Stephen Bradley he felt ‘motivated to play’ on and signed a contract extension with Rovers that will see him play in Tallaght Stadium for the 2023 campaign.

🗣️ l ''I feel I still have the motivation and that is the most important thing. I'm motivated to play and to succeed."

“Last year, when I was talking about playing in 2022, I said to the manager that this season would be my last,” said Mannus. “I was 99% sure it would be but I left a small percentage open.

“I had niggly injuries with my knee and my back last year and I had injections in both to get me through the season. It was bothering me to the point that when I was at home with my kids and I was avoiding doing certain things when I was playing with them.

“At the end of last season, we had a good bit of a break with the way the league is structured with a couple of months off before pre-season. It was so helpful to get a bit of rest and not having to dive around. I was able to do a couple of weeks before pre-season to get my body ready for playing again. The combination of those things allowed me to feel better.

“At the start of the season I felt good. I spoke to my wife and said I think I can play on another year. She said she thought it would be good as she could see I was enjoying it. I spoke to the manager and said I was reconsidering and if he wanted me to stay on. We spoke about it and he was happy for me to do it and we got it sorted.

"I’m delighted that the manager has faith in me to still want me to be at the club.”

Mannus put pen to paper prior to Rovers playing in the Europa Conference League football. Before the season concluded Mannus made his 200th league appearance for the Hoops and broke the club record of league sheetsheets. He now has 99 clean sheets from 202 League of Ireland matches having only conceded 136 goals.

He sits just one shut out off Rovers’ all time all competitions cleansheet record of 120 held by Alan O’Neill and he has that record within his grasp.

Mannus said: “Alan O'Neill is mentioned a lot at Rovers and I know he is a legend at the club so that is great I’m close to his record (in all competitions). I'd like to get some more clean sheets now, that is what we do as goalkeepers, keep clean sheets, and whenever I finish my career I'll look back on the record with pride.”

“I felt if I did retire at the end of this year, I might regret it. When you retire that is it, you are done and so it is a big thing. I feel I still have the motivation and that is the most important thing. I’m motivated to play and to succeed.”