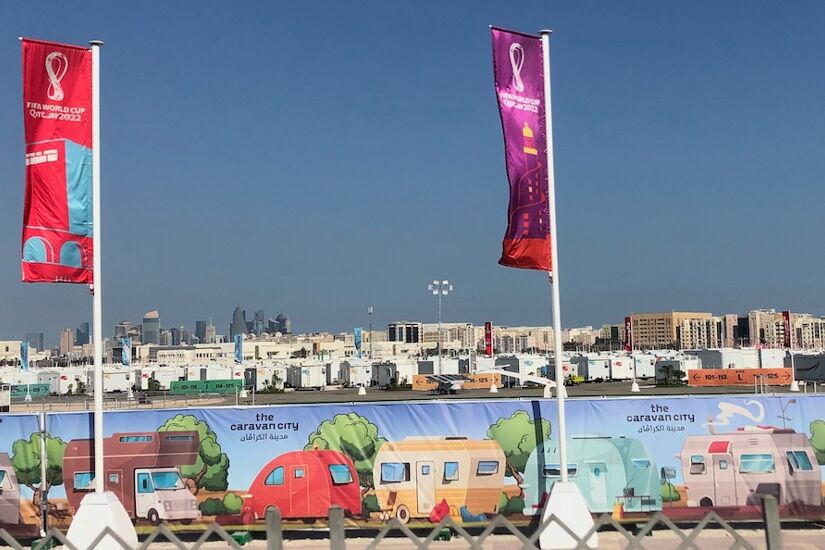 With the World Cup group stages set to be completed on Friday, my time in Qatar has also come to an end. I’m sad to be leaving the tournament and my caravan behind but it is time to go home. Eh what’s with the caravan you maybe be asking?

Well, I had difficulty getting a booking in the same apartment for all my time in Doha and so for my final few nights I stayed in one of the ‘Caravan City’ accommodation centres set up for the tournament.

I ended up in the one that is beside the Al Messila metro stop, adjacent to a Park and Ride facility for use during the tournament where six of the eight venues are within a 20 minute bus ride. Local residents with cars were encouraged to use these facilities during the tournament rather than use public transport.

The idea of using temporary accommodation during the World Cup is a good idea so that there will be less stranded infrastructural assets left behind when the football world moves on. Four of the eight stadiums will be redeveloped/downgraded after the tournament ends (see previous postcard here).

I was a bit concerned as to just what the trailer park would be like. At the start of the tournament there were some horror stories about unfinished accommodation venues with no access to amenities or even water but by the time I got to Caravan City at the start of the week any concerns I had were thankfully alleviated.

Friends from home were asking was there air conditioning and water and so it was good to confirm that I hadn’t booked a stay in Camp X-ray in Guantanamo Bay. There was water and towels but in the bathroom and not for waterboarding.

The caravan was a large trailer which while not as big as a Brittas Bay mobile home was significantly larger than those in Kilkelly Caravan Park where Father Ted and Dougal went on holidays. It had a large double bed, couch area with TV and Wi-Fi and a separate bathroom with toilet and shower.

There was running hot and cold water and air conditioning to cope with the 30 degree temperatures.

There were several hundred trailers across a huge area so with a mobile phone app, I could call for a tuktuk to take me to the reception area from where a bus ran every five minutes to the metro station about a kilometre away.

Beside the reception marquee there was a large temporary shop, outdoor large screen showing the matches with tables and chairs and a good selection of food stalls. I heard some grumbling about slow check ins and some uncleanliness but I’d no issue with my trailer thankfully.

It was also a handy location for me as it was only three stops on the driverless metro to the main media centre where I could get a media bus to take me to the various stadiums.

A quick tuktuk ride from my caravan with a view over to reception where a bus goes every 5 mins for the 1km drive to the Metro stop. From there three stops to the main media centre. It is a busy two game day for me today. pic.twitter.com/4BhYFMcZTj

Five of the venues are directly served by Doha’s three line metro that began operation in 2019 with trains running till 3am during the World Cup. The longest wait I had for a train during my time in Doha was four minutes and that was at 2.15am.

The logistical operation for getting people in and out of the stadiums was a huge task. There were loads of staff on hand to point with big foam hands to the correct platform or exit. Three venues are being served by 50 seater shuttle buses from the metro to the stadium and the bus operation is very impressive.

The buses are even colour coded with fans on red buses, workers on blue and yellow for media buses. They must have brought in thousands of buses just for the tournament.

There were a couple of venues where it was easier for me to travel to on the red metro from my apartment (close to Stadium 974) rather than travel out to the media centre and then onto the stadium on a yellow media bus.

So for I went to some games in Al Thumama and Al Janoub on the metro and joined the highly efficient shuttle bus system that takes supporters out to the game.

Fans exiting the metro were funnelled into zigzag moving queues, before being loaded on to buses that were lined up with five or six buses behind one another in six or seven columns with hundreds of friendly staff directing fans by waving their pointing wands that could switch between red and green colours.

It is pretty much a military operation which worked really well ahead of kick off but I did find it was a lot slower getting back to the metro after the game.

Using the metro or media bus was preferable to using Uber as it was difficult to get dropped that near the stadium. I made a few Uber journeys during my time in Doha and each time the driver was from India and they said were busy during the World Cup but the Hayaa card (which gives free transport to match ticket holders) was taking some of their fares away.

I asked what the price of petrol and it is only two Qatari Rial per litre (equivalent to just 50 cent). A lot of low paid migrant workers toiled to build the six lane highways that we drove on and that five years ago didn’t even exist.

The tournament will end, some stadiums will be downsized and the trailer parks disbanded.

The transport legacy for those living in Doha will remain and the metro will go back to non-World Cup set up where there are gold carriages (10 QR extra), family carriages (where men are not allowed) and standard carriages for everyone else.