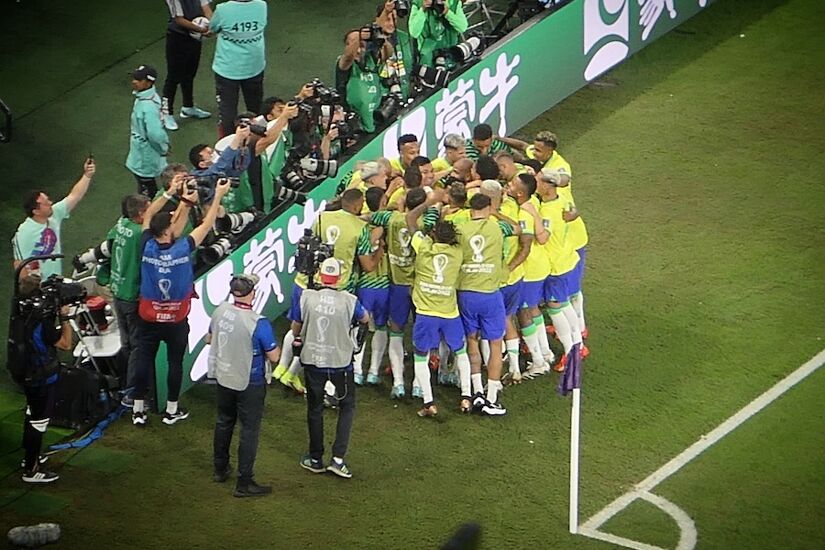 On the ninth day of the World Cup, I chalked up match number 10 and 11 and it is my first day covering two matches in one day from the press box at this tournament for extratime.com – it turned out to be quite the fun filled football day.

It began with an 8.30am alarm call in my new accommodation. I’ve moved into a caravan in the last few days but I believe that might be better explained in a future postcard! Three stops on the green metro line and I’m at the main media centre located in the Qatar National Convention Centre.

It is an almost inconceivably large building. The international broadcasting centre is on one side – think of something the size of two aircraft hangers back-to-back. Over a kilometre long, it contains the studios and control rooms for the host TV broadcaster and all the individual TV companies e.g. FOX, BBC, TV Globo etc.

The other part of the centre has the two press conference rooms, the two virtual stadiums (essentially two massive auditoria on three levels that show the games live), the catering facilities (€14 for the excellent buffet), the photographer working area and the main media area for the press.

I make my way to the latter area via the McCafe where I pick up a free coffee and muffin (using one of vouchers I’d got earlier in the week). The six members of the Irish media who have come to Qatar (Irish Times, Irish Independent, Irish Examiner, the42.ie, Second Captains and extratime.com) have taken to congregate in one section here so this is where I head for.

At 10.30am I’m off down to the bus hall from where I catch a media shuttle to the venue for today’s first game. The Al Janoub stadium will host Cameroon v Serbia. It is the last of the 1pm kick-offs for this World Cup which the players will likely be thankful for as it is 32 degrees at the hottest part of the day.

When we leave the media centre, we pass the Education Stadium, 15 minutes later we whizz by the Al Thumama Stadium and by 11.15am we are at the Al Janoub Stadium. It is one of the venues that will be downsized after the World Cup is complete (see previous postcard here).

My 45 minute bus ride from media centre went first by the Education Stadium (where South Korea play Ghana later), then Al Thumama and finally out to the Al Janoub Stadium which will host the last of the tournaments early games (& the first 1pm local kick off game I’ve been at) pic.twitter.com/TWPgAl7GdB

Each stadium has its own media centre in a huge temporary air conditioned tent beside the venue (bar at the Khalifa International Stadium where it is in the Aspire Ladies Sports Hall). I spend a bit of time doing some prep for the game and adding the team lineups when FIFA email them out about 70 minutes before kick-off.

You have to apply for a seat in the media tribune and so far I’ve been lucky – the Spain v Germany game is the only one I was rejected for. As Ireland haven’t qualified for this tournament the Irish media can be down the list a bit but for this game all of us who have requested an accreditation have been allocated a seat with a desk in the media tribune.

I’m sitting with Daniel McDonnell and Joe Callaghan for this one. We have a TV monitor between the three of us which is very handy for replays of a couple of big VAR calls in this game – including one that sees Vincent Aboubakar’s audacious scooped lob stand following  a review.

It is an open game but I do think Joe might not have called it right when at 1-0 to Cameroon he says this game might end up 3-3 but he is correct. The match ebbs and flows with two late goals in first half sending Serbia in 2-1 at the break. When Aleksandar Mitrovic makes it 3-1 early in the second half it looks like game over but Cameroon stage a super comeback for the draw to make it one of the games of the tournament so far.

My first game of the day was quite the cracker.

About 15 minutes after the final whistle we have all filed our copy and head quickly down and out to the waiting electric bus that will shuttle us from Al Janoub to Stadium 974 for the 7pm kick-off of Brazil v Switzerland. With wifi on the bus – and a use of a VPN – we get to see Joey N’Ddo’s reaction back in RTÉ’s studios to the Cameroonian equaliser – and also we keep an eye on the South Korea v Ghana game.

The media centre in Stadium 974 is rammed when we arrive – Brazil are about to perform so of course it is. I grab quick bit to eat; a Chicken Caesar Wrap and FIFA approved mineral for about €7 paying with the only card that is allowed – FIFA sponsor VISA). I take in the end of the Ghana game before heading up to media tribune.

For this match I’ve been given a seat in the overflow area of the pressbox so no desk for me but I perch the laptop on my knees and work from there.

I’m getting to see Brazil play so you probably don’t want to hear my gripes but sitting here high up in the upper tier I will have no access to replays (other than those deemed suitable for the general big screen), no power and no hard wire connection to the internet which is an issue as the WiFi is not overly reliable.

Each match is preceded by the same format. There is a shouty man – it is always a man – trying to gee the crowd up. The DJ plays the tunes to 11. When the shouty man bellows ‘Now is All’ things crank up a gear as each match has its own mini-opening ceremony. A giant flag of each team is unfurled on the pitch.

The stadium lights dim and a flame show surrounds the giant inflatable World Cup trophy that has been pushed onto the pitch. Then the players emerge for the anthems.

The Brazil crowd belt out a great rendition. It is a sea of yellow around the stadium helped by the free flags handed out ahead of kick-off. Switzerland set out to stifle Brazil and it looks like I’m about to see my first scoreless draw until Casemiro pops up late to get the winner and cause a bit of a re-write of my match report.

Once the game ends, I’m able to grab a vacated desk, hook up to the internet and post my match report online. By 9.30pm I’m making my way out for the shuttle back to the media centre.

I grab a late dinner and wander through the outside Oasis bar where members of the media can grab a €10 can of FIFA sponsored Budweiser beer. I’m soon on the metro though to Al Messila station close to where I’m staying and beside one of the massive Park and Ride facilities.

There is a carnival in the carpark with food trucks, games, a stage with a band playing but no big screen showing the Portugal game. So I catch the last ten minutes of that when I get back to my accommodation just before midnight. It has been a long but very enjoyable day. My goal count now stands at 31 from 11 games in nine days.

And my match report to round off this twitter thread as I make it to my 11th game in nine days where I saw 31 goals (and no scoreless draws) #FIFAWorldCup #Qatar2022 https://t.co/qRd59MiVFN pic.twitter.com/16jPdah1WI