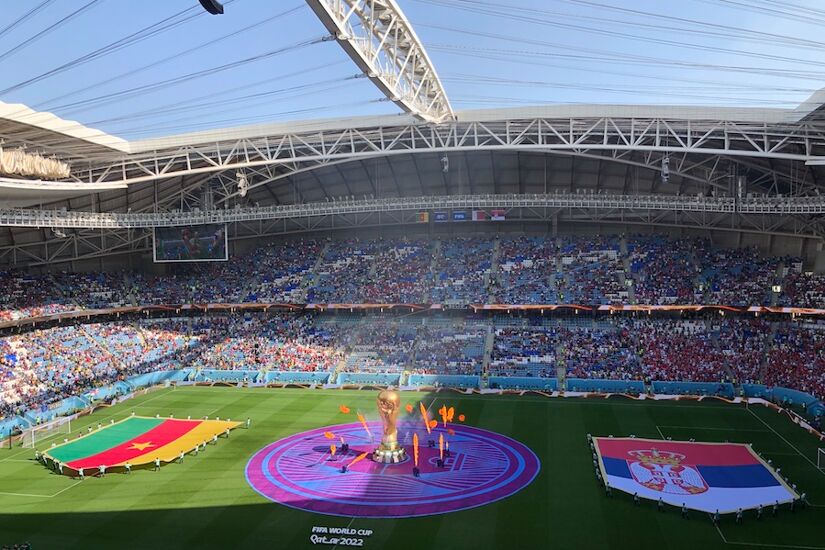 It was quite the 3-3 draw between Cameroon and Serbia with Rigoberto Song’s side probably the happier as they stopped their run of eight consecutive World Cup loses and did so as Cameroon came from 3-1 down early in the second half when they looked down and out.

The two teams came into this game with records they wanted to end. Cameroon had only scored three goals in those eight defeats but managed within just a 38 minute period in this match to equal that tally.

Serbia are striving to avoid their fourth successive group-stage elimination and this point does at least keep their qualification hopes alive. Both sides had lost their opening games and were staring down elimination at the end of the day if they came away with a loss.

This was the last of this World Cup’s 1pm local kick-off matches and it took place at the Al Janoub Stadium south of Doha. The Serbian defence, playing in the sun-drenched half of the pitch, in the opening 45 minutes might have been happier if the curtain-clad roof had been closed to help in the 32 degree heat.

Cameroon went into first half injury time in the lead but by the time the break came they were behind having conceded two goals in the additional minutes added on. The African side went 1-0 up just before the half-hour mark when Jean-Charles Castelletto found himself free at the back post to side foot home Nicolas Nkoulou’s flick on of Georges-Kevin Nkoudou’s corner.

The Serbs only had themselves to blame as they had coughed up that set piece through an unforced error and allowed Castelletto to get round the back unmarked. Substitute Christian Bassogog picked up a yellow card as the unlucky sub that was too close to referee Abdulla Mohammed when all the replacements ran on to celebrate.

The UAE ref was consistent though as when Strahinja Pavlovic equalised just as we entered first half injury time Luka Jovic was the celebrating substitute on the pitch picked out by the official to go in the book.

Martin Hongla had conceded a free-kick for a foul in a central area that Dusan Tadic floated into the box for Pavlovic to head home to make it 1-1. Dragan Stojkovic’s side weren’t done though as in the third minute of injury time Sergej Milinkovic-Savic scored Serbia’s second off a pass from Andrija Zivkovic.

Serbia were well placed for having the half-time lead as Aleksandar Mitrovic, Zivkovic and Tadic had caused plenty of problems for Rigobert Song’s side. Mitrovic had put an early header over the bar and really should have scored the first of the game in the 17th minute after a comedy of errors in the Cameroonian box.

A clearance banged Pierre Kunde in the back of the head and when the ball came to Georges-Kevin Nkoudou he sliced his clear sliced it straight to the Fulham forward who hit it wide.

Mitrovic did get his goal eight minutes after the break though as he was on the end of a sweeping Serbia move. They won the ball back wide left and moved it through Filip Kostic and Sergej Milinkovic-Savic. The Lazio player could have taken a shot but fed Zivkovic to his right. When he cut back inside it was an easy pass to Mitrovic who made no mistake from inside the six yard box. The celebrations were down on the sideline at halfway so no bookings this time for any Serb.

The discussion about whether goalkeeper Andre Onana would have prevented any of those Serbian goals (he was sent home seemingly for not taking long goal kicks) were parked as amazingly Cameroon scored twice in a four minute second half period.

Vincent Aboubakar had only come onto the pitch and raced onto a Castelletto ball over the top. His audacious scooped finish potentially looked like the striker thought he was offside. The flag did go up but VAR ruled otherwise and the scoreboard correctly showed 3-2 to Serbia.

Remarkably Aboubakar then turned provider as again Cameroon beat the faltering Serb offside trap and he was able to race in on goal before squaring to Eric Choupo-Moting and the Bayern Munich man was able to side foot into the empty net.

Both teams had chances to claim a famous 4-3 win but neither side could find the back of the net. With Brazil and Switzerland to play in the 7pm local time game (4pm Irish time) later in the day there are still more chapters to be written in Group G yet.