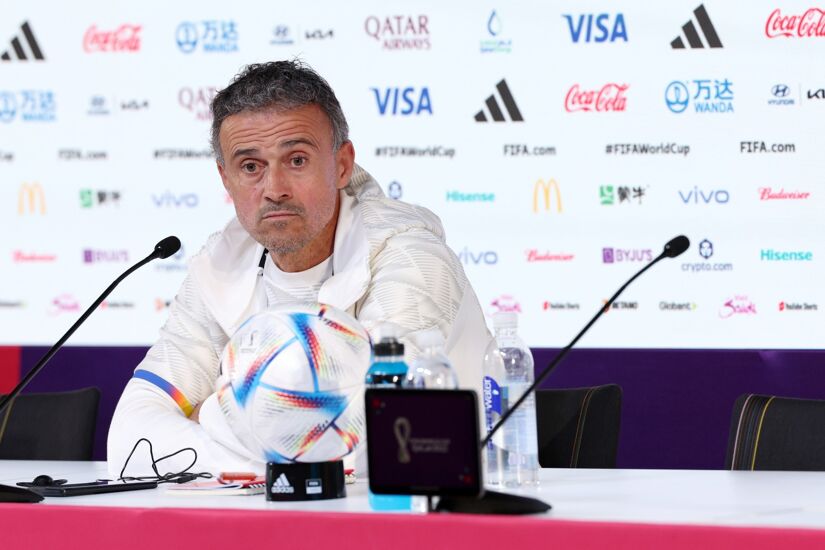 Group E remains wide open as Germany managed to snatch a point against Spain in an edgy 1-1 draw on Sunday evening.

Spain came into this fixture off the back of their biggest victory in a World Cup game, following their 7-0 thumping of Costa Rica last Wednesday.

La Roja dominated their opening tie with 82 per cent of possession, with Germany losing 2-1 in a rather embarrassing defeat to Japan.

Hansi Flick dropped Kai Havertz for this fixture is a bid to mirror Spain’s 4-3-3 formation, with Luis Enrique making just one defensive swap of Dani Carvajal for César Azpilicueta.

The Spanish dominated the game from early on, claiming 64 per cent of possession in the first 15 minutes.

Their first chance came in the seventh minute when Dani Olmo, who was a handful for Germany all night, saw his angled shot from the edge of the box saved by Manuel Neuer.

The ball rattled the crossbar after bouncing off the German goalkeeper’s gloves.

Experienced left-back, Jordi Alba, then decided to have an attempt, but his ambitious right-footed shot went flying wide.

Germany had a couple of chances of their own as the half progressed, with Serge Gnabry taking a brilliant touch and turn on the edge of the box but his curling shot was fired wide of Unai Simon’s post.

The 2014 champions then put the ball in the net on the cusp of half-time when Antonio Rudiger headed the ball in from a Joshua Kimmich free kick, but the goal was disallowed for offside following a VAR review.

The second-half was evidently more open, with Luis Enrique feeling the need to make a tactical change within five minutes to allow Atletico Madrid striker Alvaro Morata make his mark in place of Ferran Torres.

The change was a commendable one, as it was Morata who gifted the Spaniards with a lead on the hour mark.

Olmo, who was creative and energetic all night, rolled a pass towards Alba, who curled it in low for Morata who was waiting in front of goal.

Niklas Sule couldn’t defend his man from flicking a shot over Neuer and into the net from six yards out.

It was a deserving goal as Spain were knocking on the door all evening, but Germany were determined to equalise knowing that their chances of qualifying without a result tonight would almost certainly be dashed.

Jamal Musiala, who represented England at youth level, could have equalised with 20 minutes to go, as he had two consecutive shots saved by Simon in the Spanish goal.

With Spain trying their best to keep the possession between the back line and the middle of the field, their luck eventually ran out in the 83rd minute when substitute Niclas Fullkrug netted the equaliser.

It was Musiala who was causing trouble for Spain yet again as he tried to spin and shoot in the box but Fullkrug was already there waiting and took control to blast his shot to the roof of the net.

Hansi Flick was clever to bring on Leroy Sane in the moments leading up to the goal, as the Bayern Munich winger brought pace and energy to the German side in the final few minutes at the Al Bayt Stadium.

His match fitness has been talked about in the build-up to this game, but he certainly looked fresh and ready to play when brought onto the field.

Neither team were able to produce any further threat and the draw will see a rather interesting finale on Thursday when Spain take on Japan and Germany face Costa Rica.

Germany are now the only team in this group who have not yet recorded a win, and need to grasp three points against their South American rivals next week while hoping that Spain beat Japan in the other fixture.

A draw or loss will see them knocked out in the group stage for the second consecutive time at a World Cup.