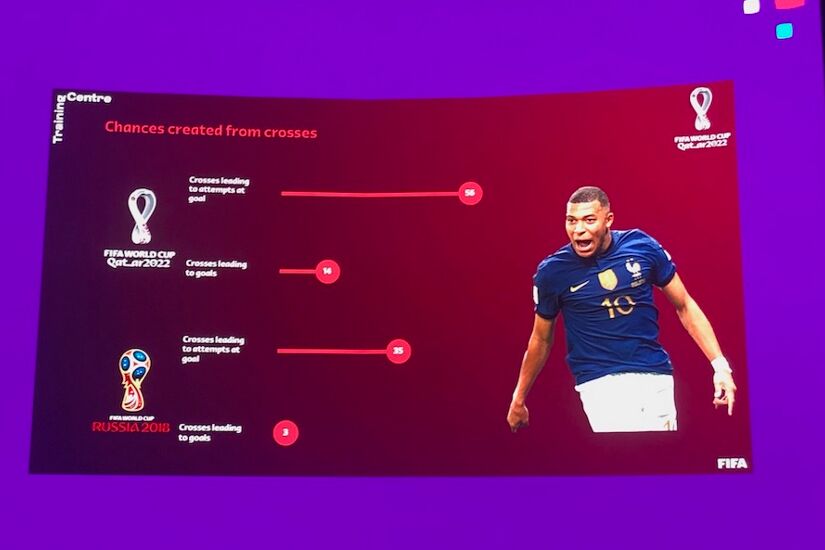 It was like attending a live version of Monday Night Football but on a Saturday morning. Yesterday I started the day at a media briefing with members of FIFA’s Technical Study Group (TSG), as they discussed some of the trends that they have seen from the the first round of fixtures at this World Cup.

With a number of video clips from some of the first 16 fixtures in this tournament, there were three areas that the TSG highlighted:

They showed a couple of clips of teams beating the high press by going long over the top including from Jordan Pickford which created one of England’s goals against Iran with an accurate long ball.

As a former goalkeeper Faryd Mondragon noted there is an opportunity created from the high press with the option for the ‘keeper to go long into space created by the opposition pressing high up the pitch.

"The goalkeeper has to know how to keep the ball away, to avoid all risks," said Mondragon. "If you have good players, you can immediately launch a counter-attack.”

The TSG also highlighted where teams counter-press with multiple players high up the pitch as soon as they lose the ball - they should Switzerland being rewarded with a goal using this tactic against Cameroon.

Re-winning the ball in these spaces close to the opposition penalty area has according to Zaccheroni a "big advantage” as there is then a shorter route to goal. It is also a tactic more suited to the modern game with the increased number of substitutions now available.

"Counter-pressing is very important, even more so today" said the 69-year-old.

"While being very taxing, today there are five possible substitutions. So this is a tactic which can be used for the whole 90 minutes. With three substitutions, this wasn’t possible. Today, you can do it continuously, because five changes is half a team. So, this raises the level of quality of the performance."

Loxton highlighted how teams that are counter-pressing are recovering the ball quicker and generating more goal chances.

"The more they counter-press, the quicker they get the ball back, What the data is showing us at the moment, is teams are counter-pressing more. They win the ball back quicker but they’re also having more chances at goal" explained Loxston.

In the first 16 matches of this World Cup, 14 crosses have led to goals, whilst 56 crosses led to attempts on goal. This is much higher than in the tournament four years ago when in the opening round of fixtures just three crosses led to goals and 35 crosses resulting in a shot on target.

Using Enner Valencia's goal for Ecuador against Qatar in the opening game of the tournament, Sunday Oliseh described it as a great example. "The ball is whipped in towards the far post. In my opinion that is to avoid the congested middle and they got that result [a goal]."

With his goalkeeping hat (and gloves on) Mondragon noted that “it's the quality of the cross that determines whether or not the ‘keeper must come out to intercept the ball. In the case of a perfect cross, it's better to remain on your line and try to react."