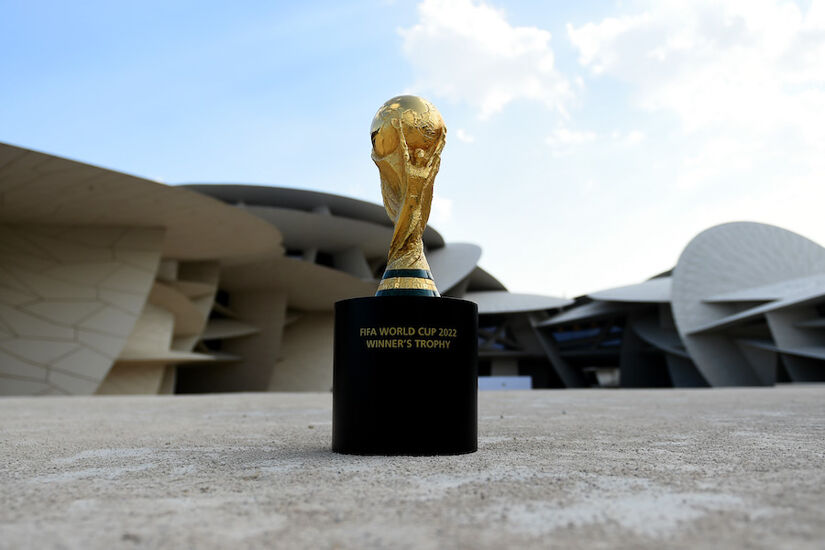 How much is a pint? Is the call to prayer waking you up? Is there anything to do other than go to see the football? These are the questions that have been sent my way during my first week in Qatar.

Well I haven’t been to any of those fancy hotels where they serve beer but if you want one in the fan zone in Al Bida Park it will set you back €14. The Oasis Bar at the far end of the cavernous media centre I’m told serves cans of Budweiser for €10.

I thought it might be cheaper as there must be a lot of Budweiser heading for its ‘best before’ date after beer was banned from the stadiums the weekend the tournament kicked-off. This very late change was a reflection that this is the first World Cup to take place in an Islamic country and left a bad taste in the mouth relating to just who is in charge of this tournament (and yes that was a pun relating to the King of Beers).

Fireworks above the FIFA Fan Festival and some attendees are getting the €14 beers into them. Bonus appearance from Hassan Al Thawadi, Secretary General of the Supreme Committee for Delivery & Legacy. He was on just before Colombian singer Maluma. pic.twitter.com/vXgAD7RxVA

I’m staying in the Umm Ghuwailina area of Doha which is walking distance from the seafront Corniche. Dotted withing a kilometre of my FIFA approved apartment must be at least five mosques. I have heard the call to prayer a numerous times but the most atmospheric ones during my time in Qatar so far have come when I’ve been strolling at sunset to watch a couple of Dutch games (Monday’s match with Senegal and Friday’s game against Ecuador).

My apartment is within walking distance (or a couple of stops on the metro if you want to avoid the 30 degree heat) of the two must see international class museums in Doha - the Museum of Islamic Art and the National Museum of Qatar. With the €50 Silver One Pass, who have David Beckham as their Brand Ambassador, you can get access to five museums and so I did take in some culture this week amongst all the football.

The Museum of Islamic Art, designed by architect I.M. Pei, is like a much larger version of the Chester Beatty Library in Dublin.

Visited National Museum of Qatar this morning. Building is stunning but it was the envelope that stole the show for me! pic.twitter.com/K3us5Y4AuB

The National Museum of Qatar is an amazing building with a view out into the Persian Gulf (and Stadium 974). The building is based on the form of a desert rose and surrounds the restored historic Palace of Sheikh Abdullah bin Jassim Al Thani, son of the founder of modern Qatar.

The museum’s blurb says it ‘gives voice to the country’s heritage and culture through commissioned films and artworks, storytelling, artefacts, and music.’ Some of the cinematic films projected on to the massive gallery walls are epic in quality. However my favourite exhibit was the envelope from a dozen years ago with the card that Sepp Blatter pulled out with the name of Qatar as World Cup hosts.

You can read all about the recent blockade of Qatar by its neighbours and some detail on the Qatar’s future plans and on the ruling family. HH Sheikh Tamnin succeeded to the throne in 2014 and has according to the exhibition ‘proved instrumental in formulating a vision for Qatar’s future development. He is married to Sheikha Jawahar Al Thani, Sheikha Al Anoud Al Hajri and Sheikha Noora Al Dosari, and has many children’.

Out at the 3-2-1 Qatar Olympic and Sports Museum this morning beside the Khalifa International Stadium. Amongst the exhibits Mutaz Barshim gets a star billing. pic.twitter.com/rE32zcG7sD

An additional museum available through the One Pass is the 3-2-1 Qatar Olympic and Sports Museum. It islocated at Khalifa International Stadium where a watched the Ecuador game against the Netherlands. The stadium and museum are all part of Qatar's Aspire Academy – the press centre was in the Aspire Zone Ladies Sports Hall. The museum isn’t open on match day as it is tacked on to the edge of the stadium but I travelled out one morning earlier in the week to enjoy viewing quite the collection of sports memorabilia.

It includes amongst a huge range of sporting artifacts torches from each of the winter and summer Olympics, a basketball signed by the gold medal winning USA American basketball ‘dream team’, Chris Boardman’s gold medal Lotus bicycle from Barcelona, rackets from Steffi Graff and Roger Federer, a signed Tom Brady jersey (!) and a Ferrari Formula One car from the Michael Schumacher era. There is also plenty to entertain the football fan.

FIFA museum at the Fan Festival: The two team sheets from 1998 #FIFAWorldCup final, gloves that couldn’t stop Robbie Keane’s late equaliser for 🇮🇪 against 🇩🇪 in 2002 + Ronaldo’s jersey from that tournament, Maracana turf 🇧🇷 and match ball from the 2018 final + Umtiti 👕 pic.twitter.com/qg6vwXlMva