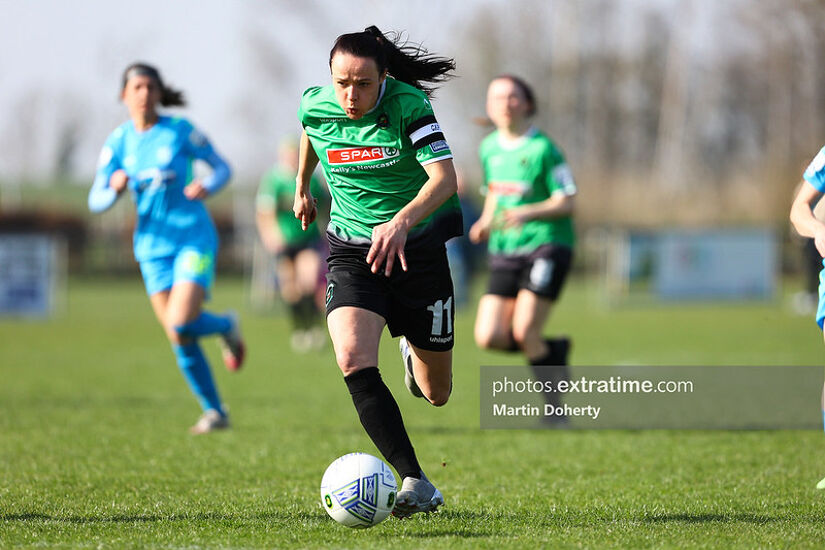 Thursday night saw the great and the good of women’s football gather at the Gibson hotel in Dublin for the 2022 SSE Airtricity Women’s National League Awards. The event celebrated a year in which the upward momentum of Women’s football in Ireland continued apace.

For the second season in succession the league title race went down to the wire with three teams entering the final weekend with a chance of emerging as Champions. And as with 2021 the thrills and spills of that final gladiatorial contest was amplified by the excellent live coverage provided by TG4.

On top of that Shelbourne achieved a momentous League and Cup double, with their Cup triumph secured at Tallaght Stadium in front of a record crowd for the event of over 5,000.

Add to that the Women’s National Team qualifying for the World Cup Finals for the first time and it was clear that those present were fully entitled to an evening of mutual congratulations.

Aine O’Gorman - announced earlier that day as Shamrock Rovers’ first signing ahead of their introduction to the WNL in 2023 - picked up the award for top goal-scorer, having hit the net 22 times in the League as well as adding three more in the Cup.

Shelbourne’s Amanda Budden took the Golden Gloves award after a campaign in which the Reds conceded just 13 goals in 27 league matches.

Aoife Brennan of Sligo Rovers scored just two goals in 2022 and one of them, a magnificent free kick scored against Treaty United back in April, proved to be the winner of the @buyforpetsonline Goal-of-the-Season award.

The underage Player of the Year awards went to Hannah Healy of Shelbourne, who picked up the U17 trophy, and Tara O’Hanlon of Peamount United, who not only won the U19 award but also cemented her place in the starting lineup for Peamount’s senior WNL side.

There were dual winners of the ‘Services to WNL’ award with Stephen Moran and Mick O’Shea both being recognised for their outstanding contributions to the league.

Stephen is the man who founded Galway WFC and brought them into the WNL in 2013. Their ten year league tenure came to end this year but having established Galway’s presence in top flight women’s football they pass the baton on to Galway United who will take their place next season.

Mick, meanwhile, is well known to all in the league for his excellent matchday photography. His dramatic images have graced many publications and websites and continue to promote the league across social media.

Young Player of the Year was a hotly contested category with so many young women making huge impressions at senior level. Among the contenders were Muireann Devaney, the driving force in Athlone Town’s midfield, and Emma Doherty who has had a remarkable season at centre forward for Sligo Rovers. In the end the honour went to Jessie Stapleton who became such a commanding figure in the heart of Shelbourne’s midfield as they marched to the League and Cup double.

The senior Player of the Year award had a similarly star-studded list of possible winners. Wexford’s Ellen Molloy put in a superb season at Ferrycarrig Park, hunting in that area behind the main striker and scoring 16 times in the league.

Aine O’Gorman was also a strong consideration for the top individual award, leading a Peamount attack that scored 80 goals over the 27-game season, and claiming 22 of those for herself. Ultimately, though, it was Athlone’s Emily Corbet who came out on top, having led the line for the most improved side in the league and banged in 20 league goals along the way.

And it was the remarkable rise of Athlone Town that also decided the Manager of the Year award which went to their coach, Tommy Hewitt.

The final element of the evening’s celebrations was to announce the SSE Airtricity WNL Team of the Season. Rachael Kelly of Bohemians was chosen in the goalkeeper’s position with a back-line heavily influenced by Shelbourne’s excellent defensive performances. Both Jess Gargan and Shauna Fox made the team alongside Athlone’s defensive rock, Jess Hennessy.

The chosen midfield was Jessie Stapleton of Shelbourne, Wexford’s Ellen Molloy, Muireann Devaney of Athlone Town, top goal-scorer Aine O’Gorman and Wexford's Ciara Rossiter. All of which left two spots up front which the selectors awarded to Emma Doherty of Sligo Rovers and Player of the Year, Emily Corbet of Athlone.