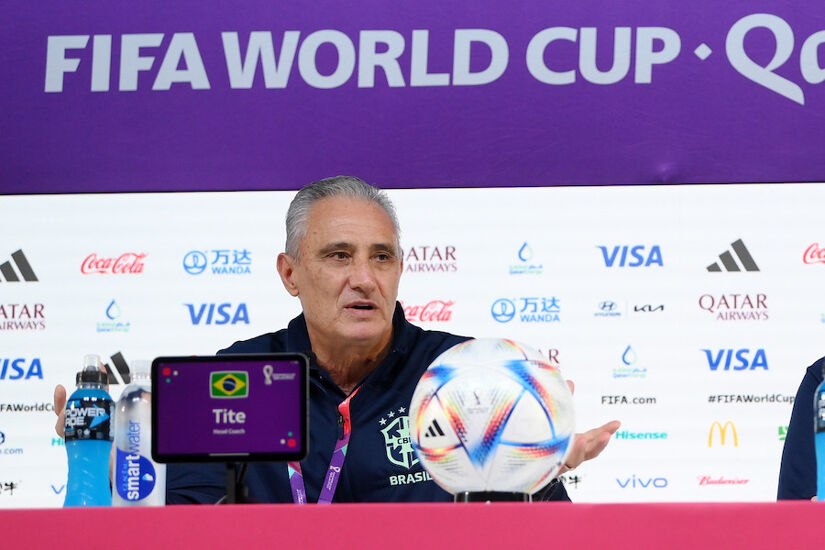 When the World Cup comes around, Brazil are always one of the favourites. When both their coach and skipper spoke to massed ranks of the media on their eve of their opening game against Serbia, the duo spoke about embracing their history as five time winners.

Yes, they haven’t lifted the trophy since 2002 but Head Coach Tite said his team can draw inspiration from Seleção victories of the past.

“It is a beautiful history and brings degree of pressure," said Tite who has been in charge since 2016 with his team falling at the quarter-final stage in Russia.

"Brazil is passionate about football. We have pressure but can take advantage of that.

“Brazil has a strong tradition of loving football. The fact we didn't win in 2018 that increases our chances of winning. We have the whole picture now and that gives us a higher chance of winning.”

“The fact we won the World Cup in 2002 is a great inspiration for all of us. We have images in our training camp from all the World Cups we have won. That is a source of inspiration and motivation so we can continue making history.”

The Chelsea defender says the squad is in a better position now than four years ago when Belgium eliminated them in the last eight.

“The atmosphere amongst us is very healthy," said the 38-year-old. "The blend of youth and experience is a good mix and that is very important. For some players it is their first World Cup but we have experienced players who play in Europe and in the Champions League.

“Neymar has a different preparation compared with previous World Cup when had injuries. The players are focused on what needs to be done."

His call to the Brazilian supporters was: “Please believe in us. Rest assured we are ready to have a great World Cup. We can dream on.”

They begin their campaign against a team who many are talking up – a Serbian side who topped UEFA Group A ahead of runners up Portugal pushing Ireland into third spot.

It is a team they faced last time out when Brazil defeated Serbia 2-0 in the group stags in the last World Cup and with Argentina and Germany already having lost their opening game there will be no complacency.

“We know it is a fierce competition and we need to be ready for the first match. We know the importance that the first match has to deal with our nerves and we are confident we will have a good performance.”