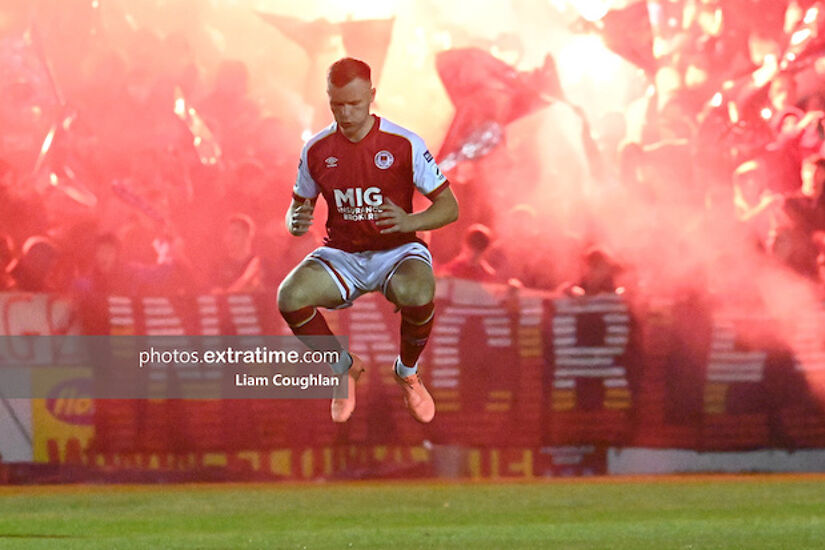 Jamie Lennon ahead of kick off at a flare lit Richmond Park Credit: Liam Coughlan (ETPhotos)

Lennon, who has made 136 appearances for the Saints, having debuted at the start of the 2018 campaign, is currently the longest serving player at the club in a continuous stint.

The 24-year-old spent two seasons with the Pats Under-19 squad before progressing to the senior squad five seasons ago.

Speaking on the St Patrick’s Athletic YouTube channel, Lennon was delighted to be able to commit to the Inchicore side for the foreseeable future.

"It's brilliant, I'm delighted to commit to the club for the next couple of years.

“I have a lot of good memories here over the years and I didn't want it to end now so I'm delighted to have signed a new contract and am ready to make some more new memories and try to bring more success back to Inchicore.

“I've been here for a long time since joining the U19s, I have a loyalty to the club, I have a good relationship with the players and coaching staff and the people behind the scenes in the club and the supporters too, so it was a no brainer for me to sign back in the end.

“I have a special relationship with St Pat's and really I'm happy that that is going to continue."

Manager Tim Clancy was eager to get Lennon secured for the next few years and sees the player as a key part of his team plans at Pats.

"Jamie has been a huge part of the squad and the club over the last number of years and he was someone we wanted to get tied down for the next couple of years.

“In terms of players who were out of contract at the end of last season, a new deal for Jamie was one of our main priorities as he is a key part of what we want to do moving forward.

“It was no coincidence that our winning run of form towards the end of last season came when Lenny returned from a long term injury. Our performances and results really picked up when he came back for Europe and the League games.

“We are looking forward to getting a good pre-season into him so that he can hit the ground running in 2023, myself and everyone at St Pat's is delighted with today's announcement."

You can follow all the confirmed signings in the Premier and First Division on extratime.com