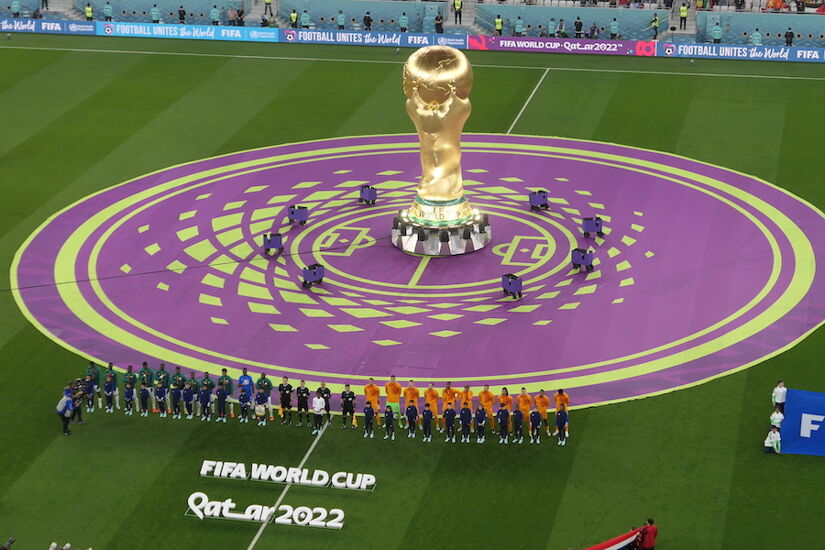 Senegal and the Netherlands line up ahead of the anthems Credit: Macdara Ferris (ETPhotos)

On the Netherlands’ return to their first World Cup since they finished third in 2014, they claimed a win thanks to two late goals scored by Cody Gakpo and Davy Klaassen. The win kept their 16 game unbeaten run going including now a dozen victories.

The middle of Monday’s three World Cup matches was played in the Al Thumama Stadium south of Doha. The venue’s architecture is said to be inspired by the Gahfiya – the woven hat worn by men in the Middle East.

Within the stadium it was hats off to the Senegalese fans though whose incessant drumming generated the atmosphere – it almost reached the decibel levels of the DJ ahead of kick-off which is saying something as his tunes came across the PA at near eye bleeding level.

The Dutch fans could be heard at times in a ground that once again had empty seats – but unlike on opening night when the seats emptied in the second half, this time it was from kick-off with pockets of empty seats dotted around the venue.

It was a tense game throughout which likely reflected the fact that both teams would be happy to take a draw away with them, knowing they both face Qatar in the group stages.

Within the opening five minutes, Cody Gakpo put in a centre right across the front of Edouard Mendy but there was no Oranje shirt to touch it home. Daley Blind got up at the back post to head wide but it was Frenkie De Jong who should have given his side the lead in the 19th minute.

He took too long to get a shot away inside the box and when he cut inside the chance was gone. Five minutes from the break a sweeping one-touch Dutch move saw Steven Berghuis shoot just over the crossbar.

De Jong also dallied with the ball in his own box and played a pass to Virgil van Dijk when the Dutch skipper had his back to him. Senegal couldn’t punish the error.

It was a Sadio Mané-less Senegal side but they had their moments with Watford’s Ismaila Sarr the standout player for the African champions. Early in the game he put a left foot shot just over and his goalbound effort mid-way through the half was only kept out by a brave van Dijk block with his head.

The Lions couldn’t really test Andries Noppert in the Dutch goal. Louis van Gaal, never afraid to make a big call with his goalkeeper, had given the 6ft 8inch net minder his international debut at 28 years of age on the biggest international stage.

The attacking threat of van Dijk from set pieces was something Senegal needed to be wary of but they still allowed him to rise unchallenged to take on a corner only for the Dutch skipper to head just over Mendy’s crossbar.

Nathan Ake would have been better not letting a cross float by him with Krepin Diatta lurking at the back post but he couldn’t direct his effort on target to trouble Noppert.

When the Dutch keeper was called into action on 65 minutes he got down well to his right to save Boulaye Dia’s well struck shot. He did similar when Aké got forward and after his team took the lead he pushed Pape Gueye’s shot around the post using all his 2m+ height to do so.

The Dutch goal had come in the 84th minute just when it looked like the defensive stability of the Chelsea axis of Kalidou Koulibaly and Edouard Mendy was going to keep the Netherlands at bay. However, Gakpo timed his run superbly to come in onto a delightful centre by de Jong and head the ball just over the quickly approaching Mendy.

The win was wrapped up nine minutes into injury time when substitute Davy Klaaseen was on hand to pick up the rebound when Mendy didn’t clear Memphis’ shot cleanly after Memphis ran onto a flick off a long ball from Noppert.

Those late strikers send=t the Orange clad Dutch supporters out into the Doha night time celebrating but the Senegalese supporters kept on drumming.