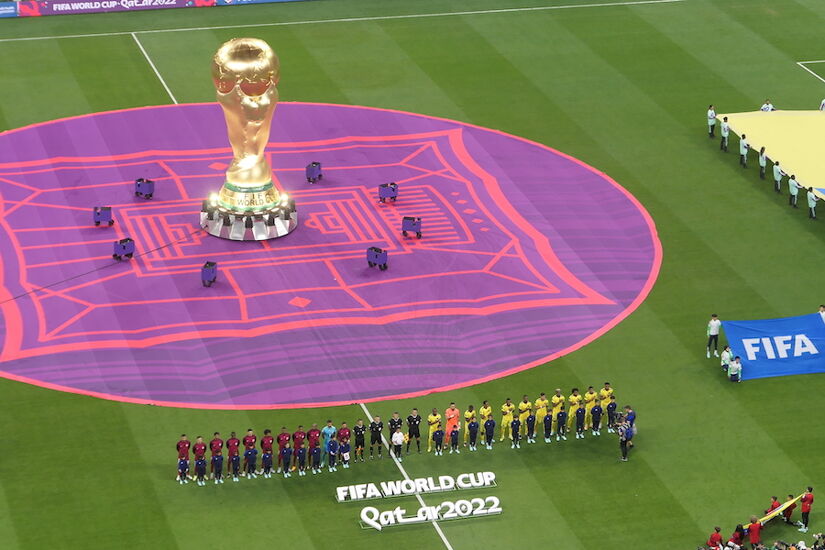 Qatar and Ecuador line up before the anthems of the World Cup opening game Credit: Macdara Ferris (ETPhotos)

Macdara Ferris reports from the Al Bayt Stadium in Qatar

The World Cup kicked off with Qatar becoming the first host nation in all 22 tournaments to lose its opening game. Enner Valencia was the hero for the visitors with the Ecuadorian captain scoring two first half goals to give his side a 2-0 victory.

The honour of playing in the World Cup opening game has gone to the hosts since 2006. When Qatar won the World Cup, people rightly questioned how competitive the team from the tiny Gulf state would be as an automatic entry into the World Cup.

A decade of preparation and huge money invested in the Aspire Academy has seen massive player development. Under manager Felix Sanchez – who came from Barcelona’s famous La Masia Academy – Qatar are the current Asian Champions winning the 2019 championship defeating Iraq, South Korea en-route to beating Japan in the final.

So the talk was this Qatari team would be competitive but they had all the hallmarks of the side that turned up in the Aviva Stadium in October last year and got tonked 4-0 by Stephen Kenny’s Ireland side.

It took liked after only three minutes into the tournament the host nation had fallen behind only for there to be the first VAR call of this World Cup.

With Michael Estrada just straying into an offside position when challenging Qatari keeper Saad Alsheeb off Pervis Estupinan’s free kick, it meant that even though Ecuadorian skipper Enner Valencia’s header hit the back of the net from Felix Torres’ volley it was ruled out.

Italian referee Daniele Orsato liaising with the VAR room back in the International Broadcasting Centre in Doha scrubbed the goal.

However, the Ecuadorian captain wasn’t to be denied long in a first half that the visitors dominated completely. The Qatari keeper had come flapping at a cross in the ninth minute and on the quarter hour he took down Valencia as he went around him in the box.

The skipper slotted home the resulting penalty with his right rolling the ball into net as the goalkeeper could only watch on.

Ecuador doubled their lead in the 31st minute. Moises Caicedo made a fine run through the middle of the opposition and played the ball side to Michael Estupinan. His delightfully whipped right foot cross was powerfully steered home by Valencia, Ecuador’s all time record goalscorer.

Qatar looked a bit lost and rarely even broke into the Ecuadorian half. This is a team made up of players who all play in Qatar and have been working towards this game for years but they certainly didn’t deliver. They lacked the choreography of the chanting and movement of Qatari fans who were bunched in a block of the stand just behind Herman Galindez’s goal.

Their team was reduced to foul play in stopping El Tricolor with two players going in the book for taking down Valencia.

Having been camped in their own half throughout the opening period, in first half stoppage time they had a golden chance to half the deficit. Hassan Alhaydos cross from the right found Almoez Ali unmarked in the front of the six yard box but he directed his header wide with the goal at his mercy.

The second half it was the Ecuadorian voices who could be heard more loudly and they were nearly cheering a third goal ten minutes into the second period. However, Saad did pull off a decent save turning away Ibarra Romario’s shot after he ran onto an excellent through ball from Jhegson Mendez.

Ecuador took their foot off the pedal and weren’t help by losing their goalscoring captain to injury. For the home side Miguel Pedro got up from right wing back just after the hour mark and his header was only inches from finding the back of the net for their best chance in front of the maroon clad Qatar ‘ultras’.

Those supporters stayed and sung right to the end but as the match went on and on more and more empty red seats became visible and there certainly wasn’t anyway near the official 67,372 attendance by the end of the game.

With four minutes remaining those missing fans nearly missed a goal for Qatar as Mohammed Muntari raced onto a long ball over the top only for his powerful shot fizzing just over the bar.

It also meant they didn’t hear the Olé, Olé chants from the yellow clad supporters as Ecuador passed the ball around during the five minutes of injury time.

Quite what the Emir thought of the defeat and the whole spectacle, we don’t know. His team became the first host nation since Mexico 1970 to fail to score in their opening game. It probably wasn’t a stat that FIFA President Gianni Infantino passed on as he sat in the royal box with the Emir and Mohammed bin Salman.

Well we are under way in this bizarre World Cup anyway.