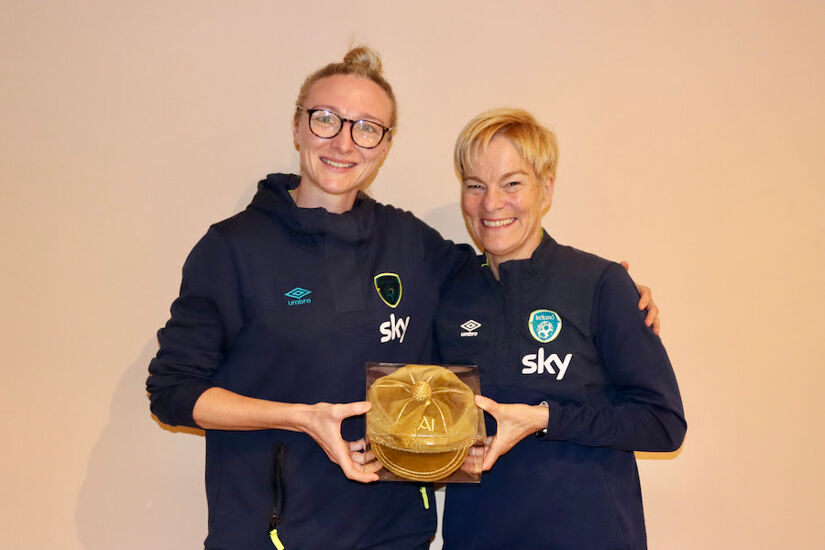 Republic of Ireland defender Louise Quinn is set to earn her 100th international cap on Monday. To mark the occasion she will skipper the Girls in Green in their friendly against Morocco.

Having earned her first cap as a late substitute in a friendly win over Poland in February 2008, the Wicklow woman, who has scored 15 international goals, will now join Emma Byrne, Áine O'Gorman, Ciara Grant and Niamh Fahey in the centurion club for Ireland.

Quinn was presented with a gold cap to mark the occasion on Saturday evening by Ireland manager Vera Pauw.

"Louise is a superb footballer and a brilliant person,” said Pauw. “She is someone who gives absolutely everything to her career, to her team-mates and for her country.

"The fighting spirit that she has is exactly what this Ireland team is all about so it is not a surprise she is a key part of it.

"Any young player wanting to forge a successful career in international football should look to how Louise always makes herself available for every training session and every game, how she is always focused in team meetings with intelligent questions, how she leads on the pitch, how she responds to challenges and set-backs, how she treats every player, staff member and supporter with equal respect and how she appreciates every opportunity that she gets to represent her country.

Monday’s match will be broadcast worldwide live on the RTÉ Player and the RTÉ News Channel.