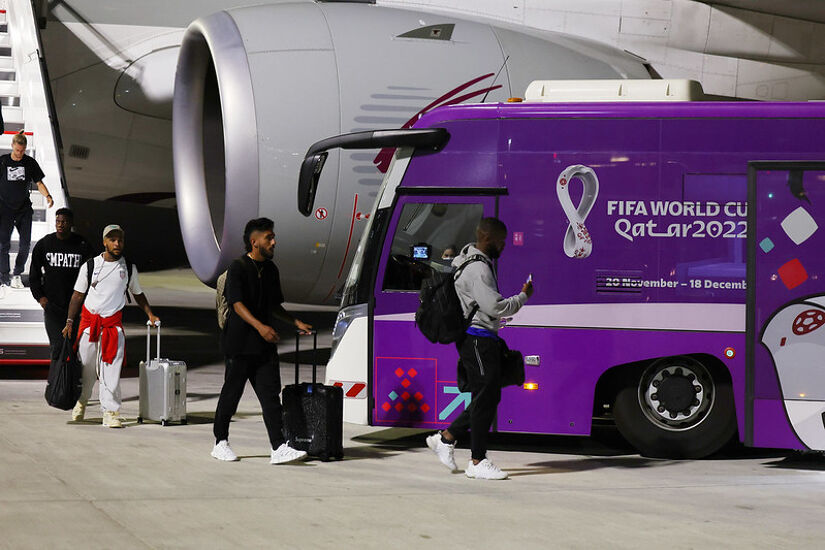 The United States national team board shuttle bus as they arrive at Hamad International Airport on November 10, 2022 in Doha Credit: Mohamed Farag/FIFA/Getty Images

The Americans will kick off their World Cup campaign against Wales on Monday, 21 November at Ahmad Bin Ali Stadium. They then face England the following Friday before rounding off their group match in a politically charged game against Iran on Tuesday 29 November.

“We are excited to take this group to compete in the 2022 FIFA World Cup,” said Berhalter who is set to become the first man to represent the USA at the World Cup as both a player (2002 and 2006) and as a coach.

“We believe we have a talented group, a strong team spirit, and one that is ready to compete.”

The Americans were among the first players to touchdown in Doha, with several members of Gregg Berhalter’s squad arriving at Hamad International Airport on Thursday evening.

Christian Pulisic led the scoring for the USA, netting five goals across the 14 games of qualifying. Defender Antonee Robinson led the USA in minutes during the Octagonal, appearing in 13 of 14 matches, while midfielders Tyler Adams and Kellyn Acosta also took the field in all but one qualifying match.

Defender DeAndre Yedlin is the lone World Cup veteran in the squad after the right back made his World Cup debut as a 20-year-old at Brazil 2014. After Yedlin’s 75 caps, the most experienced players on the roster are Kellyn Acosta (53), Christian Pulisic (52) and Jordan Morris (49).