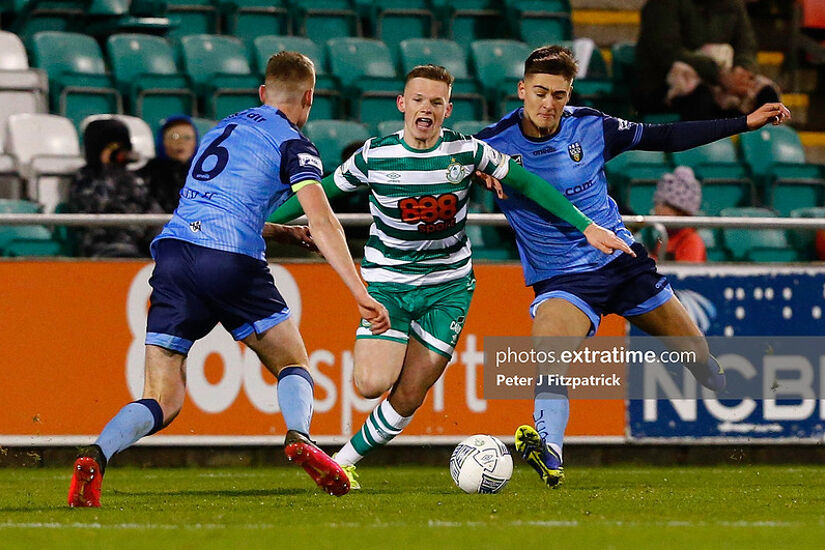 Andy Lyons is set to play his final game for Rovers prior to moving to Blackpool. He has nine goals and nine assists from 45 competitive appearances for the Hoops Credit: Peter Fitzpatrick (ETPhotos)

Having claimed seven points from the last nine on offer, UCD have valuable momentum coming into the final stages of the season and their task to avoid relegation.

The 3-1 away win against Finn Harps last time out for the Students with goals from Thomas Lonergan (2) and Mark Dignam sent Ollie Horgan’s side down and keeps Andy Myler’s men still in the fight to play Premier Division football next year.

With a place in the promotion / relegation play-off against Waterford already confirmed after the win in Finn Park, UCD in their final match of the regular season (kick-off 7pm) will be looking for a good performance and result against champions Shamrock Rovers to keep momentum building ahead of the upcoming play-off.

The Students have lost their last nine league games against the Hoops and will have to do again without Andy Myler on the sideline as he is serving the final game of his four match suspension picked up in the home match against Sligo Rovers last month.

The Hoops made heavy weather of the game in Tallaght when the sides last met with Rovers winning 1-0 on a night when the Students could have done with striker Tommy Lonergan who was away on Ireland under-age duty. Dylan Duffy looked like he had found an equaliser on the hour mark only for Alan Mannus to pull off a superb save to keep the cleansheet.

The Hoops will play their 54th and final game of their 2022 season on Sunday seeking a win to move to 79 points and break the club’s record Premier Division points total by a point and equal Rovers' club record of 24 wins in a league campaign (both earned last season).

Rovers are unbeaten in their last eight league games having claimed 20 of the 24 points on offer.

Speaking on the eve of the game Hoops Head Coach Stephen Bradley said: “The players want to win every game and Sunday is no different but it gives us a chance to beat our record and we want to try and do that. So that’ll be the focus, to go and get the three points and finish the season strong.”

Rovers’ success in recent years has been built on their home record – they have lost just the one home league match while winning three titles in a row – but away from home they have shown vulnerabilities. Both Derry City and St. Patrick’s Athletic have better away records than the Hoops this season who have drawn five and lost five of their 17 games played to date away from Dublin 24.

During the week Rovers played their final Europa Conference League game going down 1-0 to Djurgarden in Stockholm after a fine display and they stayed on in Stockholm on Thursday night flying home on Friday.

“I thought there were periods in the game when we were very good,” said Bradley “I felt the performance merited getting something from the game.”

Talking about Sunday’s opponents, Bradley said “UCD are gearing up to play their most important game of the season so we know they’re going to be fully focused and ready for us. We want to go and beat our points tally of last year as well, so it makes for an interesting game.”

As the season has come to a close injuries have limited some of Bradley’s selections and the Head Coach said “we’ve picked up a couple of knocks on Thursday so we will have a few that will be struggling who we’ll need to have a look at.”

Postcard from Stockholm - The end of Shamrock Rovers European adventure for 2022 https://t.co/CUVsNNwd5m pic.twitter.com/cuDyENAa5w

This season Rovers won 3-0 both home and away against UCD plus a 1-0 victory for the Hoops in Tallaght last time the sides met. The clean sheet saw Alan Mannus equal the club league all-time record of cleansheets for the Hoops. Last week's shutout against Derry City earned him the record outright on 98 from 202 league appearances. He comes into Sunday's game just one off the club record of 120 clean sheets in all competitions held by Alan O'Neill.

The Students last avoided defeat to Rovers in July 2013 when they drew 1-1 in Tallaght Stadium. Their last win over the Hoops came earlier that season when they earned a 2-0 victory at home.

Rory Gaffney is Rovers’ joint top goalscorer this year along with Graham Burke on 11 goals (with Burke scoring five from the penalty spot). In all competitions Gaffney leads the way for the Hoops with 15 goals – the same number as Rovers’ top scorers in 2021 (Danny Mandriou) and 2019 (Aaron Greene).