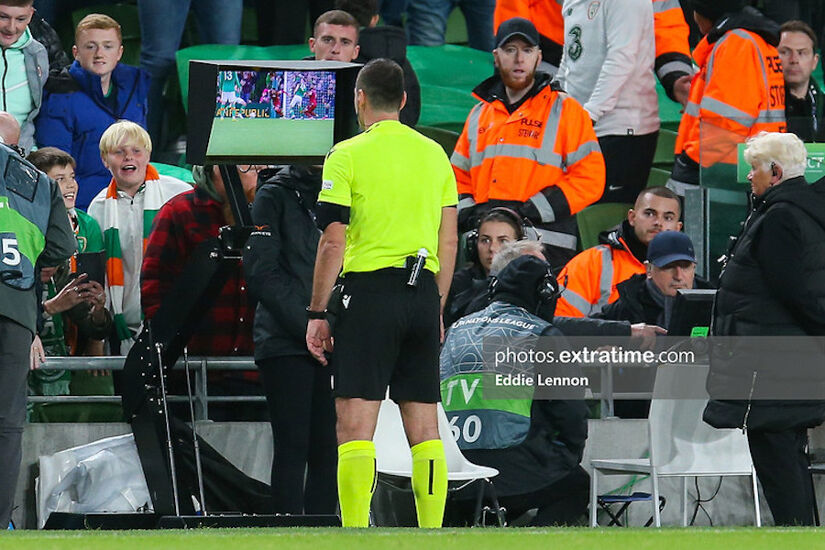 The Irish men’s international football team got the benefit of a VAR decision in last week’s game against Armenia in the Aviva Stadium and the technology could be called upon for Ireland’s upcoming Women’s World Cup play-off on October 11.

VAR referee Majej Jug awarded Ireland a late penalty due to a handball that allowed Robbie Brady slot home the winner in the Nations League and UEFA confirmed on Monday that the technology will be used across all the upcoming UEFA World Cup play-offs.

The decision comes following its use at all 31 matches of UEFA Women’s EURO 2022, the UEFA Women’s Champions League knock-out rounds and final last season as well as the finals in 2021 and 2020.

The win in Slovakia for the Girls in Green last month earned them a direct route into phase two of the World Cup play-offs where they will play the winner of next week’s phase one play-off between Scotland and Austria. Both play-offs are one legged, with Ireland set to play away in the phase two play-off final.

VAR technology will be used in both the phase one and phase two play-offs.

Ireland will be looking to win their play-off to earn one of the two automatic qualification spots or to be routed to the FIFA play-off next year in New Zealand.

Meanwhile Vera Pauw has called up Shelbourne’s Keeva Kiernan to her play-off squad.

The three timed capped defender comes in to replace Jess Ziu after the West Ham United player picked up a knee injury over the weekend that has ruled her out of the play-off.