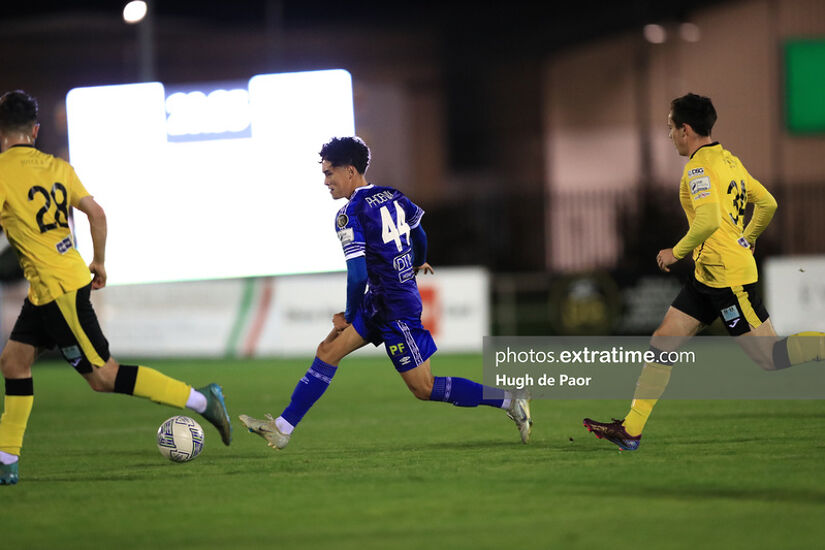 Another superb effort from Phoenix Patterson proved to be the catalyst for another good home win for Waterford. His added to a first half strike from Raul Uche to finally decide this game. A late Wassim Aouachira goal sealed the victory.

Bottom side Cobh disappointed yet again. They would have been lifted by victory in the Munster Senior Cup final against Cork, but hardly created much of note. They now seem certain to finish last.

The home side elected to make four changes from the win in Bray. Perhaps conscious of big games in the coming weeks. Darragh Power, Shane Griffin and Wassim Aouachria all dropped to the bench. Killian Cantwell missed out completely. Yassine En-Neyah, Raul Uche, Timi Sobowale and Jeremie Milambo took their place. Cobh made two switches from their home defeat to Athlone. Charlie Fleming and Beineon O’Brien-Withmarsh were replaced by James O’Leary and Dale Holland.

Waterford were immediately into the visitor’s half from the get go. It was Raul Uche who was the man they looked to for the breakthrough. A cross in the first minute saw him unable to keep his shot down while another cross from Phoenix Patterson found him well placed but he mis-timed his header. He almost created a chance when Paul Norton played a good advantage after Dale Holland fouled Patterson. His fizzed shot across the box just failed to get contact.

It was no surprise when he and Waterford opened the scoring shortly after. He won the ball initially before playing it out wide. Roland Idowu and Timi Sobowale played a neat one-two before the former put in a low cross into the area. The Spaniard was waiting to tap home from close range.

Waterford dominated proceedings afterwards. Yassine En-Neyah was the final recipient of a move where Waterford retained possession with neat interchange of passing for a few minutes. His effort lacked sufficient power to beat Paul Hunt though. Idowu then had a go, but his shot was off target.

A rare breakaway by Cobh saw Jake Hegarty burst through the heart of the home defence on a solo run before he was taken down. James O’Leary was unable to replicate his winning effort at Turners Cross with the subsequent free kick though.

The pace of the game took a noticeable lull from there. The home side were comfortable enough to knock it around without stretching themselves too much. Cobh were not able to create much of note and the quality took a considerable dip.

Cobh issued the Waterford side with a warning of their threat at the start of the second half. Dale Holland was found in space but mis-controlled his shot. Martin was still forced to block it though in case. At the other end, Patterson finally made himself known after a quiet spell. Idowu picked up the ball outside the area and played it out to the attacker. He jinked past Harlain Mbayo before unleashing a shot into the corner. Hunt was just about able to push it away.

He was unable to do much with the next shot that helped double the lead. Waterford won a free kick just outside the area. Junior Quitirna had been taking them in the first half, but he stepped aside. Patterson dipped a wonderful shot over the wall and into the top corner. A player who is in fine form at the moment.

Martin was forced into another save to deny O’Leary from a set-piece as both sides opted to run the changes. Shane Griffin who has been in good form himself then had two chances off the bench. The second was the better of two and forced Hunt to block his rasping shot with his legs. On-loan Liam Kervick almost gave Cobh hope against his parent club, but he was stopped by Martin.

Waterford put the seal on the win with twelve minutes to go. Wassim Aouachira saw his initial shot blocked by Hunt but followed up to slam home his third of the season. And all against Cobh. The away side did get a consolation as Danny O’Connell ran onto a long ball from Jason Abbott to slot past Martin. The Waterford back-line were left appealing an offside that never arrived.

Waterford now move within three points of Galway Utd after their draw away to Treaty. In a potential warm-up for the play-offs, they now play away to Longford on Monday, before playing host to Treaty next Friday. Meanwhile, Cobh face Longford in their final home game on the same night.