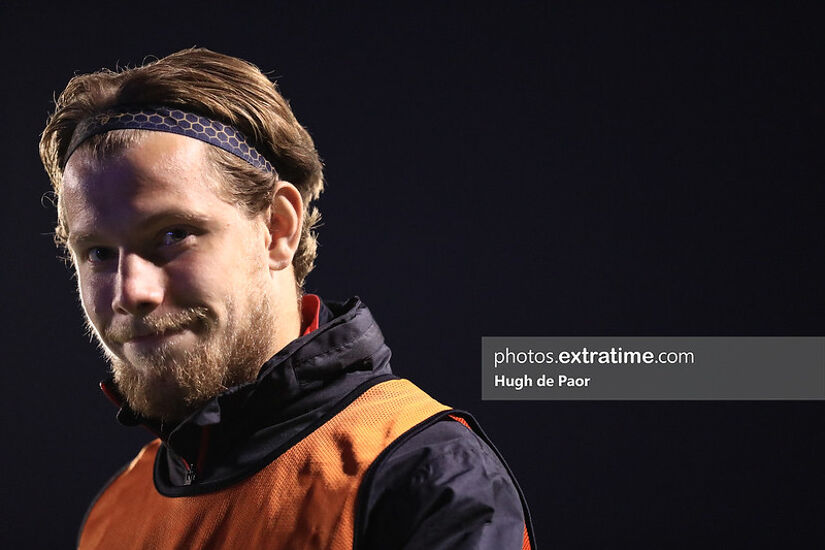 Dundalk nosed out their Louth rivals in this instalment of the Louth Derby by two goals to nil thanks to a fortuitous five minutes before the half-time break.

Drogheda had every right to feel aggrieved going into the half-time break two goals down. The Boynesiders were positive in their play and while they enjoyed less possession in the first half they looked a bit more likely to create something than their hosts.

Dundalk’s only chance from play came on the stroke of twenty minutes when Daragh Leahy managed to put the ball in the net from a corner for the Lilywhites, but it was disallowed for pushing in the box as the ball floated in.

Dundalk’s high line gave a few heart-in-mouth moments in the first 45 as Drogheda appeared to get in behind the Lilywhite’s back four on several occasions, but Stephen O’Donnell’s men played the offside trap to perfection. The Drogs looked to be away in the opening minute only for the offside whistle to come to the rescue.

Evan Weir had to be stretchered off on 25 minutes and play was paused for the guts of five minutes. This had the effect of subduing Drogheda for a spell and while Dundalk enjoyed a lot of possession, albeit without any real chances to show.

But the game was turned on its head when Dundalk were handed a two goal lead heading into the last five minutes of the first half, just when the game was getting a bit flat and Dundalk looked out of ideas.

Dayle Rooney (introduced as a sub for the injured Weir) fouled Norwegian loanee, Runar Hauge, to give a penalty away which Hauge slotted home to give Dundalk the lead on the 40minute mark.

Things went from bad to worse for Drogheda when five minutes later, a corner delivery skidded off former Oriel favourite, Dane Massey and found its way into the Drogheda goal.

There were four minutes of injury time in the first half, during which time Drogheda must have been ruing that they were somehow going into the break two goals down, despite Dundalk having just one shot on target.

Dundalk played without star striker Patrick Hoban and they created limited chances for John Martin up top on his own, in the second half. A few moments of magic from the wingers Ryan O’Kane and the introduced Stephen Bradley looked to have unpicked the Drog’s vanguard but the final ball was wanting. Truth be told, the hard work was already done, it was the visitor’s turn to look out of ideas in the second half.

With the game seemingly getting beyond Drogheda’s reach, Kevin Doherty emptied his bench after the hour mark; with a triple sub and then no sooner had the 4th official put down his board and he made another, to chase the game.

This had an immediate but temporary impact as the Drogs enjoyed a succession of corners, but that was all they had to show for it before Dundalk returned to passing the game out and using their subs to whittle time away.

A lengthy pause, as medics gave attention to a fan in the crowd, really took the wind out of the game and Ryan Brennan, only introduced as a sub, was given his marching orders on the 93rd minute, for outrageously grabbing Darragh Leahy by the throat in the afters of a handball shout.

For Dundalk, this derby and white-hot atmosphere may just cauterise the rot of bad form they have been experiencing of late. Form that has seen them nosedive out of the title race and at very real risk of not managing a European spot.

There are other sources of optimism, their unbeaten home record is maintained and three of their remaining five fixtures are in Oriel, as they strive for an all-important European place in the league.