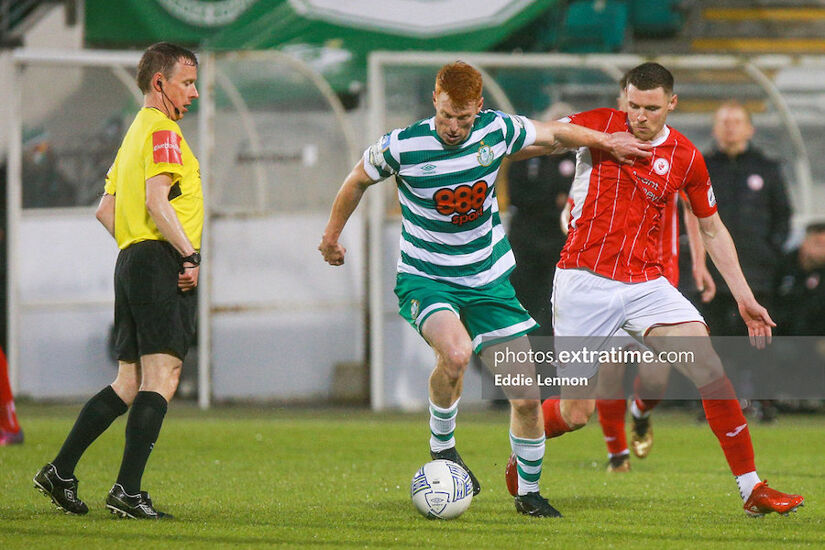 Rory Gaffney on the ball in Tallaght in May in the 3-1 win over Sligo Rovers Credit: Eddie Lennon (ETPhotos)

The Bit O’Red take on the back-to-back league champions Shamrock Rovers at the Showgrounds on Saturday evening (kick-off 7.45pm).

It is a return to action for the first time in a fortnight for Sligo Rovers having had no cup fixture and due to the international break.

Nando Pijnaker played for New Zealand in two friendly games against Australia in Brisbane and Auckland while Luke McNicholas picked up a season ending injury on Ireland under-21 duty.

It may mean that Richard Brush will return in goal to face his former team. The goalkeeper has helped his team to two wins from the three matches he has played this season.

John Russell’s men dropped to sixth on Friday after Bohemian’s 1-0 home win over UCD but a draw at least would see them jump above the Gypsies in the table.

‘’We’re all looking forward to getting back out in front of our home fans,” said Russell speaking to his club’s website.

‘’We know Shamrock Rovers will be a tough test. They sit on top of the table for a reason but our players are ready for the challenge ahead.

‘’With only three home games remaining we’re expecting a big crowd and hopefully the players can put on a top performance’’.

The Hoops will be looking to extend their lead at the top of the table in Sligo on Saturday evening. With six games remaining, and a game in hand, they are two points clear of Derry City.

Undefeated at home in the league for over a year, they have lost five games on their travels away from Tallaght in the league this season.

The Hoops defeated the Bit O’ Red 3-1 at home last time they played thanks to a Graham Burke hat-trick, with the two games between the sides earlier in the season finishing 2-2 in Tallaght and 1-1 in the Showgrounds.

Speaking to extratime.com ahead of the gmae, Hoops Head Coach Stephen Bradley knows his team face a tough test in Sligo on Saturday evening.

“Sligo is never an easy game and we know it is a tough place to go,” said Bradley. “They all are at this stage of the season. We will go there with the aim of getting three points.”

Bar Simon Power, Bradley should have a full squad to call on – with Pico Lopes and Sean Hoare both back in training and available for selection.

Three points in Sligo would go along way to helping the Hoops retain their title as they look to equal Cork United, Waterford and Dundalk in winning three league titles in a row (the Hoops did four in a row in the 1980s).

“There was a lot of noise and hype but we do our business and it doesn't matter what others do. We focus on what we do.”

The Hoops are unbeaten at the Showgrounds since May 2019 when the home side won 2-1 with goals from Daryl Fordyce and Jack Keaney either side of an Aaron Green goal for the visitors.

Rovers’ last win in Sligo came last September when Rory Gaffney grabbed the only goal of the game.

Sligo Rovers are the last team to beat Shamrock Rovers in a league game in Tallaght Stadium (back in May 2021).