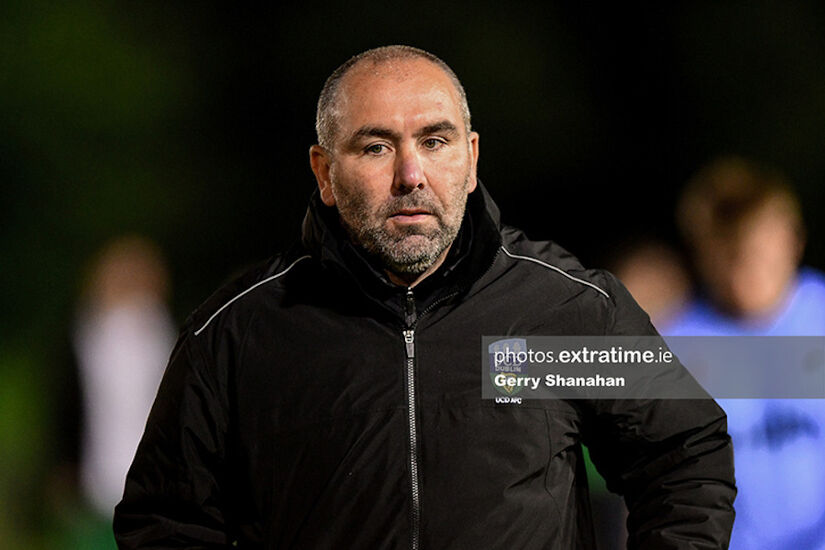 Andy Myler: ‘I'm not sure you can draw your way to staying up. You have to win games.’

Following their recent exit from the FAI Cup at the hands of First Division Treaty United, Andy Myler has tasked his UCD side to seek out some crucial wins in the final six ‘cup final’ league games to come before the end of the season.

The Students sit in ninth place in the promotion/relegation play-off position, a point clear of Finn Harps who are in the automatic drop position. Having lost 1-0 away to Shamrock Rovers on Monday night, Myler’s men face a trip to Dalymount Park on Friday.

“We described our last six games of the league season as six cup finals after our quarter-final defeat (to Treaty),” said Myler speaking to extratime.com this week. “We had to lick a few wounds after the cup game for sure. It wasn't our finest outing this year but we have to go out now every week and try and win the next game.

“I've said it before a few times, I'm not sure you can draw your way to staying up. You have to win games. We have Harps in the second last game so we need to win as many games as we can.”

The Students have shown themselves capable of winning against the big teams – their recent 3-2 home win over Dundalk is a case in point but they couldn’t follow that up with a victory in Tallaght Stadium last Monday.

“We came to Tallaght with a game plan to try and win the game, not just get a draw. We will do that again on Friday(against Bohs). There are six massive games ahead of us. Our players are scrapping for their lives in all the league games, that is all we can ask of them.”

The Students made Rovers work for all three points on Monday night. An early goal for the Hoops from former UCD man Neil Farrugia was the difference on the night.

“We'd lost our last two games against Rovers 3-0, so we needed to be a little bit safer in terms of how we went after the game. We were looking to bring Rovers on to us a small bit. Can you get a chance? Can you get a break? That happened more in the second half. We didn't get too much joy in the first half.

“Our shape was very good. Our keeper Lorcan Healy didn't have a whole load to do other than get smacked in the head and having to go off with concussion. When he was assessed he said all the right things but we had another look at half time and he wasn't right - he didn't remember the rest of the first half.”

UCD were missing the goal scoring threat of Tommy Lonergan (nine goals in his last 11 games) as he was away with the Ireland under-19 team. Dylan Duffy played a more central role in his absence and came closest to a goal for the Students.

He forced Alan Mannus into a superb save to stop the former Hoops player from scoring. Duffy played nine First Division matches in 2020 for the Shamrock Rovers II team and made three appearance off the bench last season in Rovers’ title winning campaign.

“He is a powerful runner, is a real handful and has some really good quality on the ball,” said Myler about Duffy. “He has a great left foot. He would cause anyone problems and he has got better and better as the season has gone on. There is plenty of interest in him. He will have a big future in the game. Rovers have a lot to say on that as he developed here (in Tallaght).”

Myler grew up watching Shamrock Rovers play at Glenmalure Park, won the First Division as a player with the Hoops in 2006 and was part of the coaching team when the Hoops played in the Europa League in 2011.

With Rovers set to play in Belfield in the final game of the season, is Myler hoping they will have wrapped up the league by then so that they might slip up after securing the title like they did last season when they lost to Bohemians?

Despite their precarious position, Myler is happy with how the campaign has gone in the top flight this year. “We've enjoyed the season. Even though at times it seems like a struggle or hard work, for everyone - players and coaches - everyone has to go up a level but we've enjoyed it.

Robbie Keane: 'If you look at the best players in the world, players from the streets have a toughness about them’ https://t.co/gaLI1syMJ4 pic.twitter.com/oMWg5crSGI