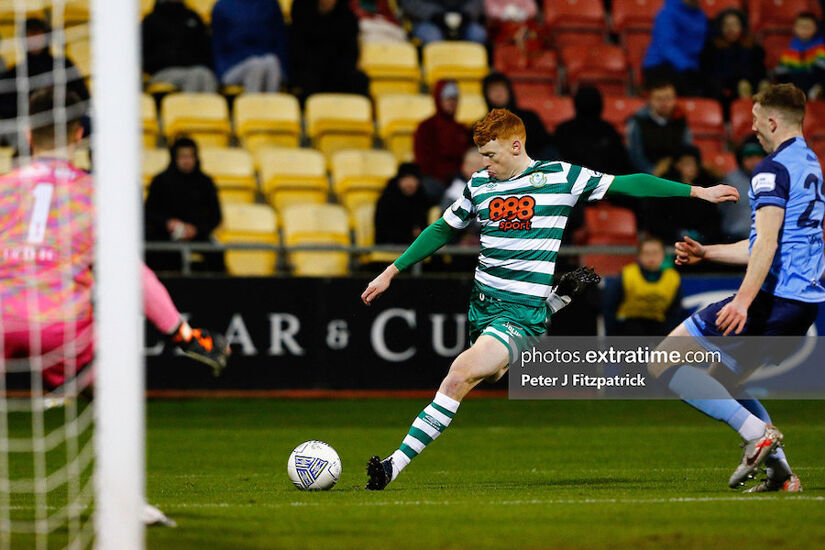 The Hoops are using the current international break to play their two games in hand over Derry City.

Having played out a scoreless draw against Shelbourne last Thursday to extend their lead at the top of the table, they can move five points clear if they can get their third win of the season over UCD (kick-off 8pm) – their previous two games have finished in 3-0 wins for the Hoops.

Rovers are without a win in three games across three different competitions having drawn with Shels, lost away to Derry City in the FAI Cup and suffered a 3-0 defeat in Ghent in the Europa Conference League.

However, Hoops Head Coach Stephen Bradley is comfortable with the position his team are in.

“We’ve been here before, this isn’t a team that just sprung up and are at the top and are a bit shook,” said Bradley speaking to the Irish Mirror after last Thursday night’s game in Tolka Park.

“It doesn’t matter how close it is. If you offered me two points ahead with a game in hand, I’d have ripped your hand off at the start of the year.

“And that’s the position we have. We’re in a fantastic position, tonight is another point towards our goal, we move on.”

The Students sit in the relegation play-off spot, a point clear of Finn Harps who are bottom of the table.

Andy Myler’s men have played one game less than Harps and so will be hoping they can at least claim a point against the Hoops on Monday night.

A win may be beyond their reach as Rovers haven’t lost at home in the league since May last year and UCD have never won a league encounter at Tallaght Stadium.

The Students have won just two games away from Belfield in the league this year – a 2-0 win in Sligo in July and a 1-0 win in Finn Park last May.

The Students followed that win up with a disappointing 4-1 FAI Cup quarter-final defeat away to First Division side Treaty United.

The Hoops have won the last eight league games against UCD. The Students last avoided defeat to Rovers in July 2013 when they drew 1-1 in Tallaght Stadium. Their last win over Rovers came earlier that season when they earned a 2-0 victory at home.

You have to go back two decades for the last league away win for UCD against the Hoops. That was a 1-0 win in December 2002 when Rovers were playing home games at Richmond Park.

The Hoops haven’t lost a competitive game in Tallaght in 13 months with their last loss coming at the hands of Flora Tallinn on 26 August 2021. They are 24 league games without a defeat at home – which was a feat they last managed when they played out of Glenmalure Park in Milltown.