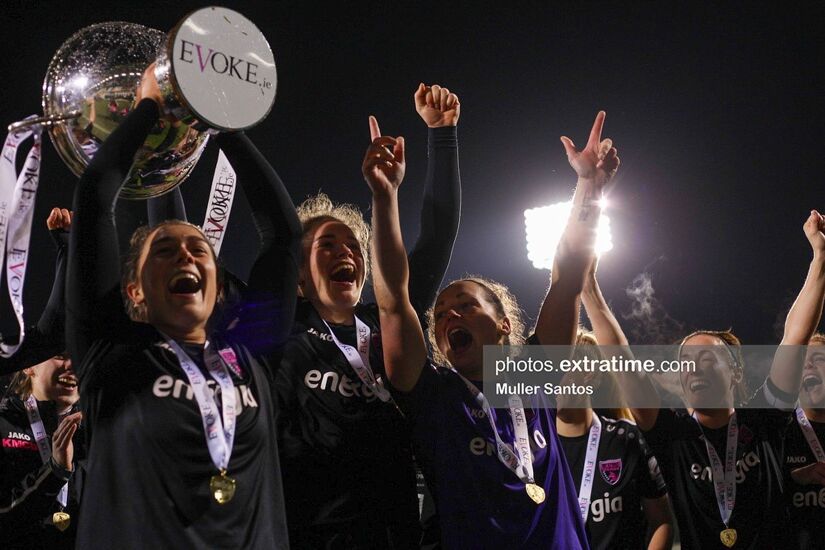 On Saturday, 23 September the two teams that will face off in the FAI Women’s Cup Final at Tallaght Stadium in November will be decided.

The first game of the day sees a Northside Derby meeting between Shelbourne and Bohemians at Tolka Park (kick-off 2pm).

Shels have the superior record over the Gypsies this year in the Women’s National League having won two of the three meetings between the sides and drawing the third.

On the opening day of the season Shelbourne ran out 1-0 winners at Tolka Park and then in May they secured a comprehensive 3-0 win over the WNL champions at Dalymount Park.

The final fixture saw the side play out a scoreless draw at Tolka Park in July and could point to Bohemians being in with a chance of securing a first ever appearance in the Cup Final, if they can play to their best on Saturday.

League form could play a factor too, Shelbourne have suffered defeat in their last two games, and this coming at an inopportune time at the business end of the season and as they look to defend their WNL title.

They’ve lost to title rivals Peamount United and Athlone Town this month, while Bohemians have two wins in a row coming into this fixture having defeated Treaty United and DLR Waves.

All that being said, a victory would mean Bohemians’ first ever win over the Reds since they joined the WNL in 2020.

Bohs have two games played in this years Cup competition to Shelbourne’s one as the Reds received a bye in the first round.

The Gypsies overcame Galway after extra-time with a very narrow 1-0 win with the game having looked like it was destined to go to penalties, they then followed that up with a quarter-final win over Sligo Rovers which has set them up for their first ever appearance at this stage of the competition.

Shels run to this stage of the competition is shorter although a well fought 3-2 victory over Peamount United will certainly stand to them. They are also well experienced in this competition having appeared in three of the last seven finals – winning once.

Noel King’s side will also have an eye on claiming the League and Cup double this year, something they came very close to doing last season.

Tommy Hewitt’s side have been the surprise package this season in both the WNL and now the FAI Women’s Cup with this being the side’s first appearance at this stage of the competition since they joined the league in 2020.

They are also still riding high in League competition, they may be sitting in fourth place but they are just six points off top of the table Wexford Youths – and with a great chance to halve that gap when the two side face each other again next week in the WNL.

History certainly isn’t on their side however, since they joined the WNL in 2020 Wexford have won every time the side have met. That includes their two meetings so far this season in the League, and their FAI Women’s Cup Quarter-Final meeting last season.

They have yet to concede in the Cup this year however, having routed Whitehall Rangers 7-0 and then defeated Cork City 2-0 on the way to this stage of the competition.

Youths are the team to beat this year in both competitions, they’ve managed to mount a serious challenge for the WNL this season which now sees them four points clear at the top with just four games to go – which would see them crowned champions for the first time since 2018.

They are the current FAI Cup champions and will definitely be looking at winning both competitions this year, and they certainly have the pedigree having appeared in five finals since 2015 and winning four times.

Like Shelbourne, they received a bye in the first round and have only appeared in the quarter-finals this season, this year they ran out 3-1 winners over DLR Waves to set up this fixture.

The final of the competition will take place on Sunday, 6 November at Tallaght Stadium.