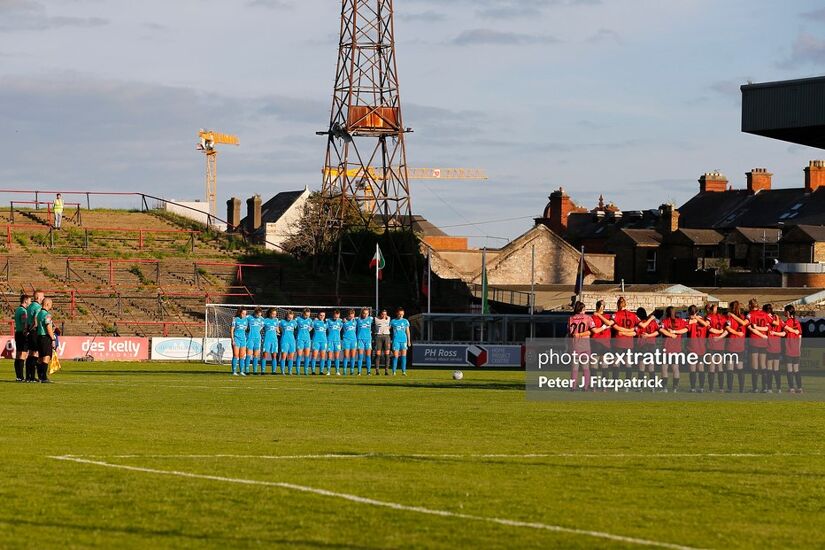 Bohemians and DLR Waves line up ahead of their WNL game on Saturday, 17 September 2022. Credit: Peter Fitzpatrick (ETPhotos)

WNL Roundup: Wexford Youths go four points clear while Athlone and Peamount both win to stay in the title race

As the Women’s National League inches towards its conclusion there were a number of huge results this past weekend with a huge bearing on who will claim the title with Wexford Youths going four points clear at the conclusion of Saturday’s action.

The Town secured their first ever WNL win over Shelbourne on Saturday to ensure that they stay firmly in the race for the title right up to the bitter end.

Tommy Hewitt’s side had been unlucky not to beat the Reds back in July when Noel King’s equalised late on from the penalty spot but this time around they managed to get over the line and claim a vital three points.

A quickfire double from Scarlet Herron and Kellie Brennan in the 64th and 68th minutes gave the home side a commanding lead with just over twenty minutes to go in front of the TG4 cameras at Lissywollen.

For the Reds that’s a second loss in a row and against another team challenging for the title having lost to Peamount United the week before and for Athlone their title challenge will almost entirely hinge on the result of their next fixture against Wexford Youths on Saturday, 1 October.

There was late drama in Turners Cross when Becky Cassin scored in the 89th minute to give the Rebels the victory over the Tribeswomen.

The win was Cork’s first in three games, and it increases the gap further between themselves and bottom of the table Treaty United as well as giving them a chance to chase down Sligo Rovers in eighth place who are now just four points clear of the Rebels.

Peas recorded a fourth win in a row and extended their unbeaten run to seven games when they saw off Sligo at Greenogue on Saturday.

United’s current run of form has dragged them into the title race as they are now just six points behind Wexford Youths at the top of the table.

Aine O’Gorman scored in the first half with Sadhbh Doyle adding a second just beyond the hour mark to give Peas the win – if they can keep this run going all eyes will be on their second last game of the season as they are set to host Wexford Youths on Saturday, 22 October.

Bohemians overtook DLR Waves in the table with a win at Dalymount Park on Saturday.

Waves have been struggling for form as of late and they’ve now won just two games from their last ten fixtures.

Abbie Brophy opened the scoring in the 42nd minute to give the Gypsies the lead but Waves replied shortly after the interval through Mia Dodd to level the sides.

It looked like the teams would have to share the points until the home side won a penalty late in the game with Chloe Darby converting from the spot to earn Bohs a second win in a row.

Youths look unbeatable at the moment after they recorded their seventh win in a row and extended their unbeaten run to ten games with a comprehensive victory over Treaty United on Saturday.

The win puts them six points clear at the top of the table with just four games to go although three of those games are against their fellow top four sides, Athlone Town, Peamount United and then Shelbourne.

Wexford did all the work in the first half with Edel Kennedy putting them in front in the opening five minutes before Kylie Murphy and Ciara Rossiter added two quick goals just before half time to secure another three points as they aim to claim their first WNL title since 2018.