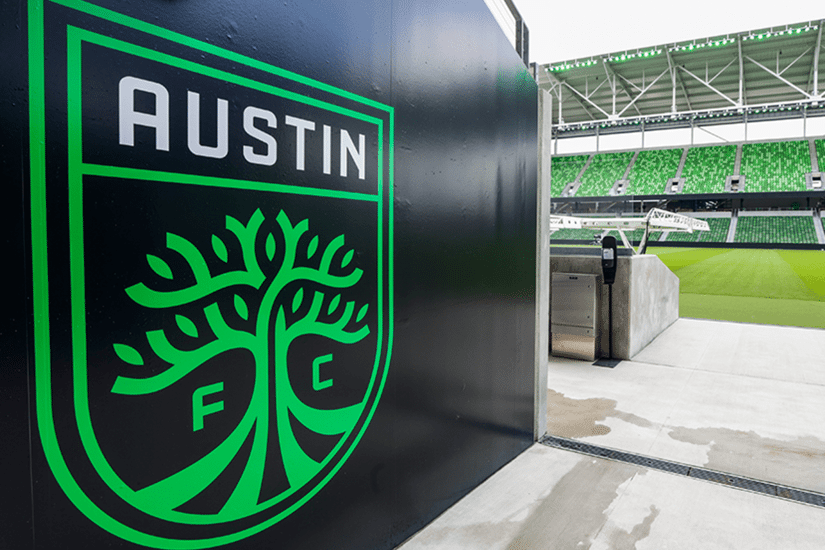 Austin are set for the MLS playoffs after their victory over Real Salt Lake Credit: None

Austin FC qualified for the MLS Cup play-offs for the first time with a 3-0 win over Real Salt Lake at the Q2 stadium on Wednesday.

A hat-trick from substitute Moussa Djitte helped the Verde over the line and was another piece of history for the young franchise as it was the first hat-trick in team history.

Austin were able to dust themselves off after a 3-0 away defeat to Seattle Sounders and return to Central Texas to finally secure their place in the postseason after four defeats in five games.

After falling to defeat in Nashville the Verde made the nearly 3,000 kilometre journey to Seattle in Washington State to face the Sounders who were in need of every point they could get as they battled to reach the play-offs.

The massive distance travelled by the Texas side seemed to take its toll as Austin FC struggled to get going in the opening stages, falling behind after 12 minutes.

Veteran former Uruguayan international Nicolas Lodeiro found himself in possession inside the box and squared it to Peruvian striker Raul Rudiaz who had the easiest of finishes to give the Sounders the lead.

Seattle kept their foot on the accelerator, doubling their lead 20 minutes later as U.S. international Jordan Morris unselfishly played in Rudiaz, giving him his second tap-in of the half.

The Verde misfortunes were compounded with 20 minutes to play as a Sounders free-kick bounced off the back of Austin defender Ruben Gabrielsen and past the hapless Brad Stuver to put the game beyond the Texans as they travelled back across the country empty handed having only recorded one shot on target.

This marked three defeats on the spin for Josh Wolff's side in a worrying trend as they had conceded eight times, scoring only once as they returned to Austin for the visit of Real Salt Lake who were also under pressure to pick up points in their play-off fight.

The 8.15pm Wednesday kick-off made life easier than the usual Friday 7pm as I was able to enjoy my journey to the Q2 Stadium rather than my previous mad dash through Friday rush hour traffic.

I took my seat in the press box and watched the fans slowly trickle in as the atmosphere, songs and music built up before kick-off.

Dundalk's Jon Gallagher was rested, bringing an end to his run of ten consecutive starts as Slovenian Zan Kolmanic was given the nod at left-back.

The Verde almost got off to the perfect start with a breathtaking move put together by their trio of Argentine forwards.

Sebastian Driussi dropped deep, spraying an inch perfect diagonal ball to Emiliano Rigoni who was also his teammate at Zenit St.Petersburg. Rigoni brought the ball under control, squaring it to Maxi Urruti whose deft shot deflected off the underside of the crossbar after a passage of play most deserving of a goal.

Austin couldn't maintain the quality of this early move however, as Real Salt Lake took over the game, forcing Stuver into a couple of routine saves before former U.S. and current Guatemalan international Rubio Rubin dragged a shot just wide as the teams went in level at the break.

The Utah side continued their superiority until the hour mark when a trio of inspired substitutes from Josh Wolff turned the game on its head.

Jon Gallagher along with Ethan Finlay and the returning Moussa Djitte were introduced with the Senegalese making his mark less than two minutes after being introduced.

A delicious outside of the boot cross from Diego Fagundez found Djitte in the box, with the striker producing a composed finish to put the Verde in the lead and on the brink of the play-offs.

Salt Lake City continued to probe but Austin were bolstered by taking the lead and doubled their advantage on 75 minutes.

Finlay struck a volley off the post after a corner, but Djitte was quickest to react once again, finding the back of the net with a volley of his own.

The fight went out of the visiting team after he decisive second goal and they began to leave more gaps in defense allowing Austin centre-half Ruben Gabrielsen to maraud forward, playing in Djitte who was able to coolly finish and secure a stunning hat-trick in the space of 20 minutes, the first such achievement in team history.

It was certainly a timely statement from the former Grenoble striker who was suspended for picking up two bookings in a matter of seconds in Seattle.

Djitte has had his fair share of critics since arriving in the Texas capital, but he will be hoping to use this performance as a springboard after scoring more goals in 20 minutes than he had in nearly two seasons previous.

The full-time whistle sounded and marked Austin FC's first play-off qualification in their second season. The excitement was apparently too much for one fan to handle as he streaked onto the pitch and celebrated amongst the players before promptly being tackled by event staff, somehow managing to leave the field with more clothes than he entered it.

Post-season football is secure for the Verde, but wins remain important as the higher in the table they finish, the more home games they will get to play with Nashville being the next side to visit Q2 Stadium on Saturday.