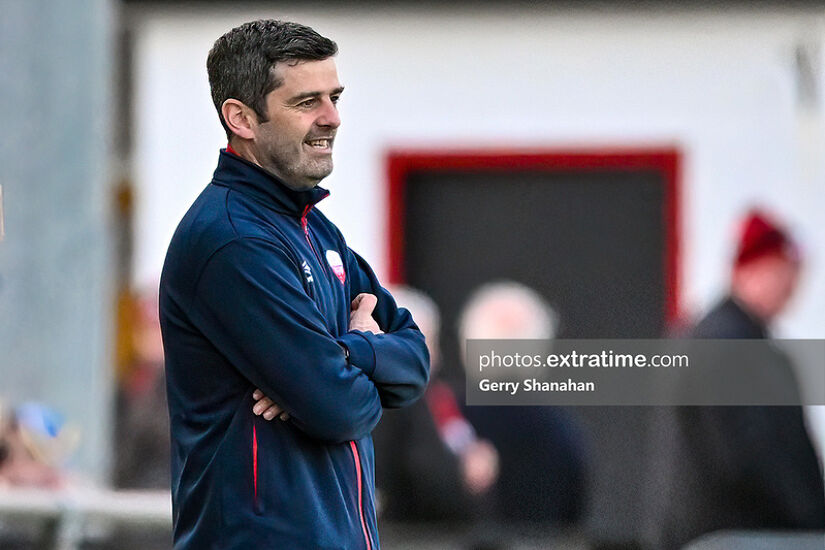 Tommy Barrett will be looking for all three points at the Athlone Town Stadium on Friday night Credit: Gerry Shanahan (ETPhotos)

Athlone Town host Treaty United at the Athlone Town Stadium on Friday evening with a 7.45pm kick off.

Dermot Lennon’s Midlanders are currently bottom of the First Division, five points below Cobh Ramblers with a game in hand of the Rams. As such, a victory over the Limerickmen coupled with a Cobh defeat could allow eighth place in the division to become a reality.

With their opposition tonight having picked up as many points in their last four games (9) as Athlone Town have all season, the odds are firmly against the home side.

However, in the form of top scorer Thomas Oluwa and the recently returned Adam Lennon, Athlone Town have two quality attacking operators who can threaten the Treaty backline if given the space and time.

Athlone Town have been busy in the summer window with signings from both home and abroad- including goalkeeper Vladislav Velikin from the USA, defenders Charles Mutawe (Drogheda United) and Jarlath Jones (Shelbourne), midfielder Jack Kavanagh (Dundalk) and Ukrainian forward Valeriy Dolya.

With such an influx of players it can take time to settle down and find a preferred lineup, however it also provides a sense of the unknown for the opposition and they will be hoping to take advantage of this against Treaty.

The Treaty United promotion train is firmly on the tracks following a 2-0 victory over league leaders Cork CIty last weekend. Goals from Ben O’Riordan and Marc Ludden (penalty) condemned Colin Healy’s men to defeat while allowing the Limerick men to open a gap of four points to Wexford in the battle for the final play off position.

New signing O’Riordan opened his goalscoring account with that thunderbolt, while another recent arrival, former Athlone Town forward Success Edogun, has also found the net since his mid season arrival- his latest strike coming as a consolation in a defeat to Waterford.

That reverse is Treaty’s only defeat in the last five games, in which they have kept four clean sheets and scored ten times. Another ex Athlone Town frontman, Enda Curran, has been leading the line for Tommy Barrett’s men this season with ten strikes so far in the campaign- including four in their past four games.

The loss of the influential Charlie Fleming may be tempered somewhat by the acquisition of the aforementioned O'Riordan from Cobh Ramblers while Jack Arra's departure to Regional United is offset somewhat by Edogun's arrival.

With O'Riordan's long distance shooting prowess and Marc Ludden a threat from both the sideline- with his throw-ins- and the penalty spot, Treaty United have goalscoring threats throughout the pitch and will be looking to add to the four goals they've already scored against Athlone Town so far this season.

Treaty United manager Tommy Barrett made 29 league appearances for Athlone Town in the First Division across the 2011 and 2012 seasons.

Athlone Town have yet to record a clean sheet in the league this season while Treaty United have notched ten shutouts so far- spread between Jack Brady and Conor Winn.

Success Edogun has scored three league goals in the First Division- two for Athlone Town and one  for Treaty United. His last goal for Athlone came in the previous meeting between the sides at the Athlone Town Stadium- a one all draw in April.