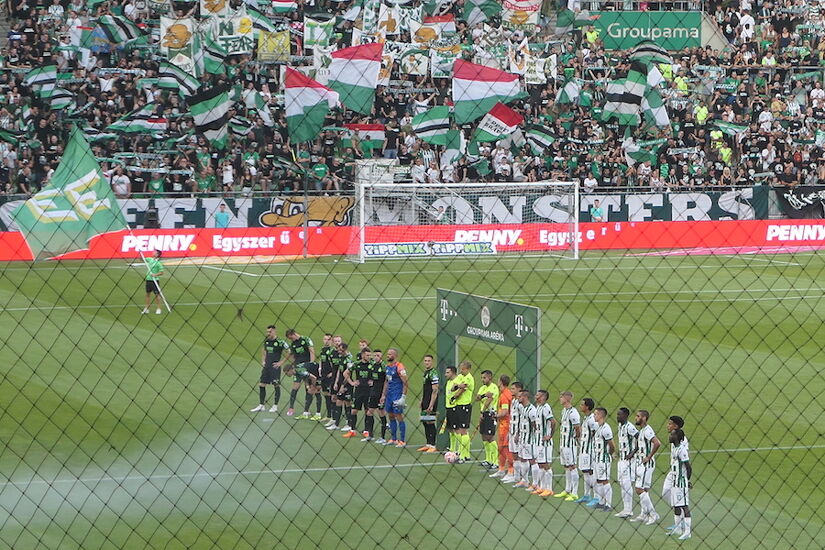 Shamrock Rovers and Ferencvaros line up ahead of kick off in the first leg of their Europa League play-off Credit: Macdara Ferris (ETPhotos)

Postcard from Budapest and the Europa League play-off

When Shamrock Rovers last made the play-off of the Europa League in 2011, they played in a city on the banks of the Danube in stifling 35 degree August heat and got a win. The Hoops defeated Partizan Belgarde that evening to become the first League of Ireland club to make a UEFA group stage.

However the Hoops didn’t emerge with an away victory this time around but were left feeling blue on the banks of the Danube in Budapest on a drainingly hot Thursday evening in Hungary. The first leg 4-0 defeat to Ferencvaros looks to have closed off Rovers’ route back to the Europa League group stages.

It was heaviest European defeat for the Hoops since Spurs came to Tallaght in the 2011 group stages but of course Rovers know that even if they are eliminated by the Hungarian champions, they have group stage football via the Europa Conference League beginning next month.

It was Rovers’ first visit to Hungary since their European Cup 5-1 aggregate defeat to Honved in 1985 so it was great to see the club’s goalscorer from that tie John Coady amongst the travelling support.

Joining the Rovers fans were assorted Irish people living in Budapest who came to support the League of Ireland side (we’ll excuse some of them wearing GAA jerseys!) and English football fans who spotting a game while in Hungary on holidays procured a ticket in the away end.

Tickets were €8 with travelling supporters located in the away section that holds 1,275 in the 22,000 capacity stadium and this area had a net draped from roof to pitch – an idea for the south stand in Tallaght to reduce bottle thowing fines maybe?

The Ferencvaros fans have a bit of a reputation but the Garda liaison who travelled out with the club, in discussions with the local police, deemed it was a low risk game so a police escort wasn’t required for away fans. With both sides wearing green and white, away fans blended in around the ground and there was no issue grabbing the local bus back into the city centre following the match.

The ‘Fradi’ fans didn’t really give Rovers travelling support much notice. It was almost disappointing that they didn’t even try to wind up the away section when they scored a stunning volley for their fourth goal in injury time at the end of the game.

The opinion coming into the match was that Rovers’ opposition would be close to the quality of Ludogorets (who beat the Hoops 3-0 in Bulgaria in the Champions League second qualifying round) and so it proved. It was the classic case of mistakes being seized upon by the savvy opposition for maximum punishment. 2-0 down at half-time was a pretty fair reflection of the first half.

RTÉ turning up to show Rovers getting tonked in prime time was pretty unpalatable after the club has won four and drawn one of the seven games played in Europe to date but the complaints would have been worse if there was no Irish TV coverage.

There was a cracking atmosphere generated by the 15,239 supporters in the wonderfully proportioned Groupama Arena but, alas, from a Rovers perspective there was no chance to celebrate a goal.

The Hoops players came down to acknowledge the travelling supporters after the final whistle with a few offering some apologies but they have had an excellent campaign to date and they are only at the half way point with another seven games to come.

The positives from the game for Rovers were the ongoing sensational form of 40-year-old Alan Mannus who pulled off a string of saves in the game, ending the match with two 17-year-olds on the pitch in Justin Ferizaj and Gideon Tetteh and the return of Jack Byrne from injury – his second half passing display was, not that anyone needed it, a great reminder of just what he brings to this Hoops side.

Rovers will need to regroup in Europe next week (after the small matter of playing Dundalk in the league on Sunday!) when they face Ferencavors in Tallaght on Thursday.

The Hoops managed to do this after the first leg loss against Ludogorets, winning the second leg (but not the tie), and that helped them carry momentum into the next round when they won home and away against Shkupi.

Stephen Bradley will be hoping to call upon the services soon enough of a number of players who missed the match in Budapest including club captain Ronan Finn (suspended), Aidomo Emahku (ill), Graham Burke, Chris McCann and Simon Power.

The Hoops will learn who they will play in the group stages when the draw is made next Friday lunchtime.

Super atmosphere in a gorgeous ground. Fradi will be very happy with that result and some lessons learned for Rovers to take into the seven remaining games in Europe this season. Lesson One is keep Jack Byrne fit. Great to see him back out there dictating play. pic.twitter.com/pjQtbgHpRf