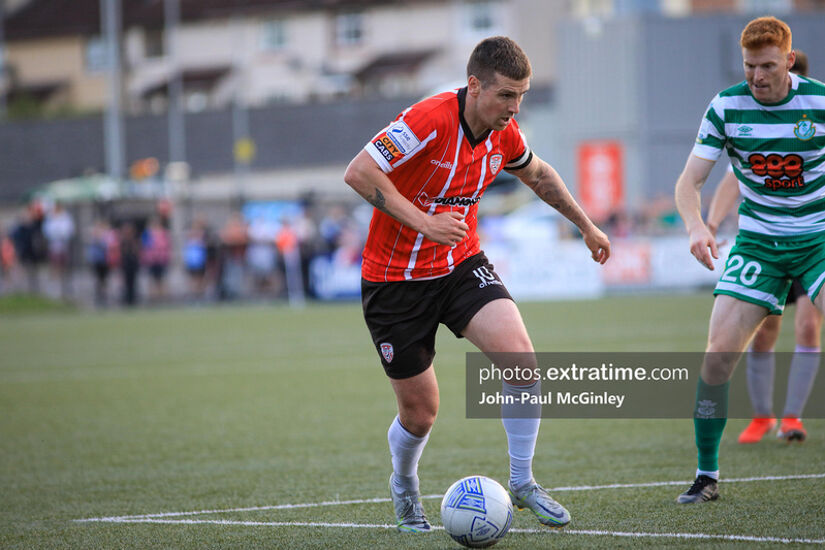 New Derry City captain Patrick McEleney will be looking to lead his team to victory in Head in the Game Park tonight Credit: Peter Fitzpatrick (ETPhotos)

Drogheda United host Derry City at Head in the Game Park on Friday night (7.45pm KO) looking for back to back wins following their excellent victory over Shelbourne at the same venue last week.

Kevin Doherty's side fell behind to a Jack Moylan strike early in the game before a double from former Red Ryan Brennan sandwiched a strike from another ex Shel, Dayle Rooney, as the Boynesiders won 3-1 for their sixth home win of the season.

The last time the two sides met at Head in the Game Park, Joe Thompson gave the visitors the lead before Brennan levelled the scored for the Drogs. The same 1-1 result occurred at the Ryan McBride Brandywell Stadium when the sides last locked horns in the league.

On that occasion, it was Ruaidhri Higgins' men who once again opened the scoring - this time through the now departed Matty Smith- before a Dean Williams penalty tied the scores.

The Candystripes hosted Shamrock Rovers last weekend and shared the spoils with their Dublin rivals following a goalless encounter which included a missed penalty from Will Patching.

The  Foylesiders are unbeaten in their last seven games, stretching back as far as a Showgrounds defeat to Sligo Rovers at the end of May.

In the last few weeks, the aforementioned Smith departed for Shelbourne, while backup goalkeeper Nathan Gartside joined Cliftonville with Jack Lemoignan taking his place on the bench for the Shamrock Rovers game.

In terms of recruitment, four of the summer window signings started that game with Mark Connolly taking the place of former skipper Eoin Toal - now at Bolton Wanderers - with Ryan Graydon, Declan Glass and Sadou Diallo all part of the Derry City midfield for the second league game in a row as second placed Dundalk are firmly in their sights.

In a statement ahead of the game, which also confirmed Patrick McEleney as the new Derry City captain for the rest of the season, Ruaidhri Higgins spoke to his club media about Drogheda United's record at Head in the Game Park, saying,

“Look at their record against the top teams in the table and you’ll see a win and a draw against Shamrock Rovers and two wins over Dundalk” he said.

“Dundalk have only lost three times in the league this season and two of them were against Drogheda, so it shows what they are capable of.”

Derry City have the best away record in the league this season - only recording two defeats on league roadtrips in 2023.