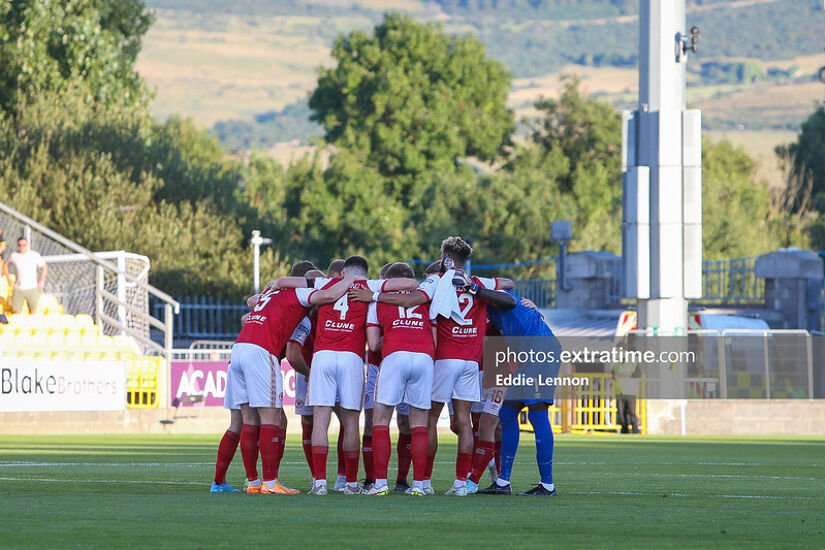 St Patrick's Athletic will be looking to focus on getting three points against Sligo Credit: Eddie Lennon (ETPhotos)

Following their elimination from European competition at the hands of CSKA Sofia last week, attention now turns to league action for Tim Clancy’s Saints as they host Sligo Rovers at Richmond Park on Sunday at 5pm.

The hosts currently sit in fourth place, one point ahead of their visitors today and things were equally as close in their previous league encounter which finished 1-1 at The Showgrounds.

There has been speculation that on loan goalkeeper Joseph Anang may be leaving the club to join Derby County and while his replacement David Odumosu earned plaudits for his performances in the Premier Division with Drogheda, he has yet to play in the league this season.

Following travel disruption, last weekend’s fixture against Shelbourne wasn’t played so the Athletic's last league game was almost a month ago (15 July) as they drew with Dundalk at Richmond Park. Since then, they’ve played four times in Europe and were defeated in the FAI Cup which leaves the league as their primary focus for the remainder of the season.

With that in mind, and the fact that their visitors for this encounter are their closest rivals at the moment, a strong lineup is expected for the home side, despite having played on Thursday night.

Winger Serge Akatayi scored a memorable goal in Sofia and could be pushing hard for a starting place for this clash while Jamie Lennon started both legs against CSKA Sofia and may make his first league start since February 18th.

Despite being similar to their hosts in exiting Europe during the week, in Sligo’s case their win over Viking ended the campaign on a positive note and they travel to Inchicore looking for their second win in four days which would allow them to leapfrog their hosts.

The season ending injury suffered by the inspirational Garry Buckley necessitated the arrival of Cameron Evans during the week. The Welsh central defender played in the Premier Division for Waterford last season and will be looking to bring that run of form into the team, however- like Odumosu for the Athletic- his playing minutes have been restricted this season so far.

In other injury news, Colm Horgan and Seamus Keogh remain  unavailable while top scorer Aidan Keena and midfielder David Cawley will be assessed prior to kick off.

Speaking to his club media on Saturday, John Russell stated,

’It is a big game tomorrow evening.

‘’St Pats are a good side and sit just above us in the table so we know we’ll have to be at our best to get a result.

‘’We come into the game in good form. It’s important we build on our recent performances.

‘’We’re expecting big away support tomorrow. Our fans have been fantastic this year and we hope we can put on a top performance for them’’.

The sides have faced each other twice this season with Sligo Rovers winning the first encounter 2-1 at Richmond Park in February courtesy of goals from Colm Horgan and Aidan Keena- Tunde Owolabi on the mark with a consolation for St Pat’s. Their last clash was a 1-1 draw at The Showgrounds in May with Keena again on the mark for the Bit O’ Red and Darragh Burns netting for the visitors.

Both teams have scored the exact same number of league goals so far this season with 33 strikes apiece. Their respective top scorers this season- Aidan Keena and Eoin Doyle- have both netted four goals in their last four league games.

Incidentally, both Doyle and Keena played with their respective opponents earlier in their career before they later moved to clubs in Scotland. Doyle picked up silverware with the Bit O’Red in 2010 and 2011 before joining Hibernians. Westmeath native Keena was initially with the Shelbourne Academy before moving to St Patrick’s Athletic and ended up signing for Hibs’ rivals Hearts in 2017.