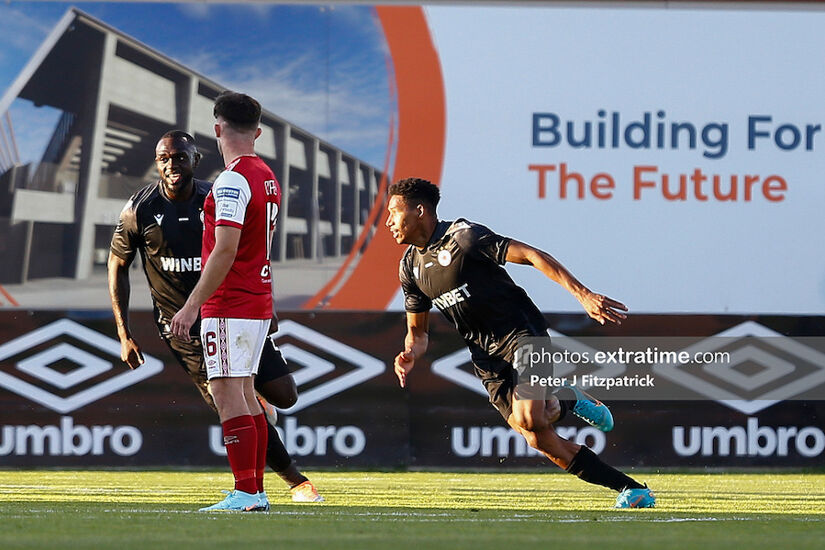 The European third round qualifiers came to a conclusion on Thursday evening with both St. Patrick’s Athletic and Sligo Rovers exiting to leave just Shamrock Rovers representing the League of Ireland in Europe.

The Saints couldn’t quite back up their stunning 1-0 first leg win in Sofia and overcome CSKA Sofia in their Europa Conference League qualifier second leg in Tallaght.

Losing 2-0 on the night, they probably will feel hard done by as they wasted a number of good goalscoring opportunities only to concede soft goals in each half – not marking a corner well enough on 12 minutes and then a very harsh penalty late in the game awarded for a dubious handball by Harry Brockbank.

The game had 11 bookings and two red cards in a post-final whistle melee on the pitch.

What they said – Tim Clancy

"When you look at it back, we've seen it on the video and it looks like it their player's hand first before it hits Harry's hand,"said Coach Clancy.

"So again the ref is  really quick to put his whistle in his mouth and give the bigger club the decision. I went in to speak to him there but I wasn't allowed."

What they said - Jamie Lennon

“I think it was just frustration from both players,” said Lennon about the red cards after the final whistle for Adam O'Reilly and Bradley de Nooiher. “Yer man was celebrating in front of our fans. I don’t really like that.”

The Athletic earn €0.75m from their European campaign this season.

Tim Clancy: ‘The ref was quick to put his whistle in his mouth and give the bigger club the decision’ https://t.co/qolMu57OG4 pic.twitter.com/vRrvrDRxWq

The Bit O’ Red were well beaten by Viking in Stavanger last Thursday in the first leg of their Europa Conference League third round qualifier but restored pride at the Showgrounds with a 1-0 win which also added valuable points to the UEFA coefficent.

Will Fitzgerald scored the only goal of the second leg as Viking progressed to the play-off round 5-2 on aggregate. It gave the Bit O’Red a remarkable fourth win from their six matches in Europe this season.

The Bit O’ Red earned €0.85m from their European campaign this season which is €100,000 more than St. Pat’s who played one round less having gotten a bye in the first qualifying round as FAI Cup winners.

The Hoops matched Sligo Rovers four wins from six (plus another draw) after their 2-1 away victory in Skopje on Tuesday gave them a 5-2 aggregate win over Shkupi. They now have eight more European matche to come.

They play the first leg of their Europa League play-off away first against Ferencvarosi next Thursday as the Hungarian side lost their Champions League third round qualifier against Qarabag to drop into the Europa League qualifiers.

What they said – Stephen Bradley

“It is something we set out at the start of the year and we have achieved it,” said Bradley about group stage qualification. “That has always been our aim in the dressing room. The job isn't done though, we are going to the group stages to win games and do our best to get out of the group.”

What they said – Rory Gaffney

“If you were saying at the start of the season you’d have qualified for the group stages with Pico (Lopes) and Chris McCann injured, Danny Mandriou having left the club, Jack Byrne only coming back from injury, Graham Burke has been injured recently….it shows you the quality that’s in the squad.”

What they will earn

What does it all mean for the coefficient

The Republic of Ireland came into this season ranked 40th on UEFA’s country coefficient table but, with nine wins and three draws from the 18 European games played to date, the league has moved up four additional places as it stands.

Adding the last five seasons together gives the overall coefficient of 9.625 (up from the 8.125 at the start of the European campaign).