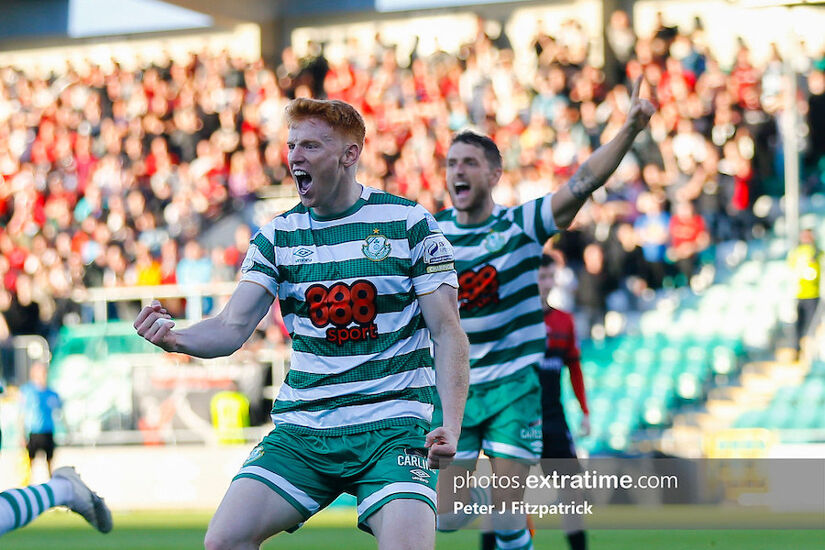 It is a Shamrock Rovers squad packed with European experience, including five players who have played in the Europa League group stages (three of them on two occasions). The Hoops are now looking to win their upcoming play-off against Ferencvaros to return Rovers to that group stage level for the first time since 2011.

Graham Burke is the Hoops all-time leading goalscorer in Europe (his seven goals puts him joint fourth overall for a League of Ireland player). Ronan Finn has 53 Euro appearances (one short of the LOI record), Alan Mannus hit the half century mark in North Macedonia with Sean Gannon just two off that level.

A crucial player in the current Rovers squad is a 32-year-old striker who is only playing his second season of European football. Signed in 2020, Rory Gaffney’s season ended with injury the match prior to Rovers opening European game. Last season, he made four European appearances scoring twice and this year he has scored two goals from six more matches.

Gaffney found the net in Rovers’ 3-0 home win over Hibernians and on Tuesday night in the 2-1 away win against Shkupi in a victory that has guaranteed his side group stage football.

The Galway man was among a number of the Rovers squad moulded by Hoops Head Coach Stephen Bradley who have stepped up when it was very much required in Europe over the last few weeks.

Speaking after the game in Skopje, Gaffney said: “If you were saying at the start of the season you’d have qualified for the group stages with Pico (Lopes) and Chris McCann injured, Danny Mandriou having left the club, Jack Byrne only coming back from injury, Graham Burke has been injured recently….it shows you the quality that’s in the squad.

“Dylan Watts has been brilliant. Aaron Greene has come in. We’ve Sean Gannon’s experience. We were able to bring on Sean Kavanagh (as a sub in Skopje). There is a really good squad there. I wouldn’t know what our best XI is, maybe the manager doesn’t know either.”

The Hoops fell one hurdle short in making the group stages last season, losing in the Europa Conference League play-off to Flora Tallinn (with a 4-2 away defeat in the first leg followed by a 1-0 reversal at home). That painful defeat, which was their last loss in Tallaght, has shaped the success of this current season in Europe.

“Flora showed how good they were on the night. They sat back and picked us off. Afterwards, you were looking at their players playing (for Estonia) against Belgium, so they were used to playing in big games.

“The manager when he’s gone through video clips, he has pointed out how teams have punished us at times. He’s always looking at the bigger picture. He might show a clip from a Finn Harps game and say that could cost you in Europe. He’s been thinking about it and he’s been building this over the last number of years. It’s come this year.

“With the gaffer we have worked on that, we spoke about it. We knew how dangerous Shkupi were last week. They showed it again in the second leg but we had a (3-1 first leg) cushion and something to hold on to.

“It is a great achievement (to make the group stages). I suppose it was a nervy night. Thank God, we were so good in the first half (in first leg) with the two goals.”

Gaffney's manager was full of praise for the player speaking after the win.

Stephen Bradley said: "He is a top player. He is a handful for anyone. You can see, he can run, he can shoot off both sides, quick, direct and clever.

"When you combine all that it is the makings of a really good footballer. His character and his attitude makes him a dream to work with."

The Hoops were due to travel back home from Skopje via Shannon but fog in the west early on Wednesday morning saw a welcome diversion back to Dublin.

There is no rest for Rovers though as they have a trip to the Brandywell on Friday, the first leg of their play-off in Budapest next Thursday before welcoming Dundalk to Dublin 24 on Sunday week.

For Gaffney, the focus is firmly on the league as it was because of the positive results Rovers have secured travelling through Europe on the Champions Path that has guaranteed them group stage football.

“They are massive games (coming up in the league) against Derry and Dundalk. Get two results there and I think it’ll be hard for them to catch us. I don’t want to bang on about cliches but our full focus is Derry on Friday night.

“If we don’t win the league, we’d be at a huge disadvantage next season. We had a favourable tie against Hibs from Malta. Everyone was delighted to get them. Out of the five teams we could got that day, that was the one we wanted. It made things easier for us.

“We’d have taken a team from North Macedonia, compared to somebody else we could have got. We will want to have a go at the group stages but it is about winning the league. That’s our bread and butter and my main focus but sure we’ll have a go at everything.”