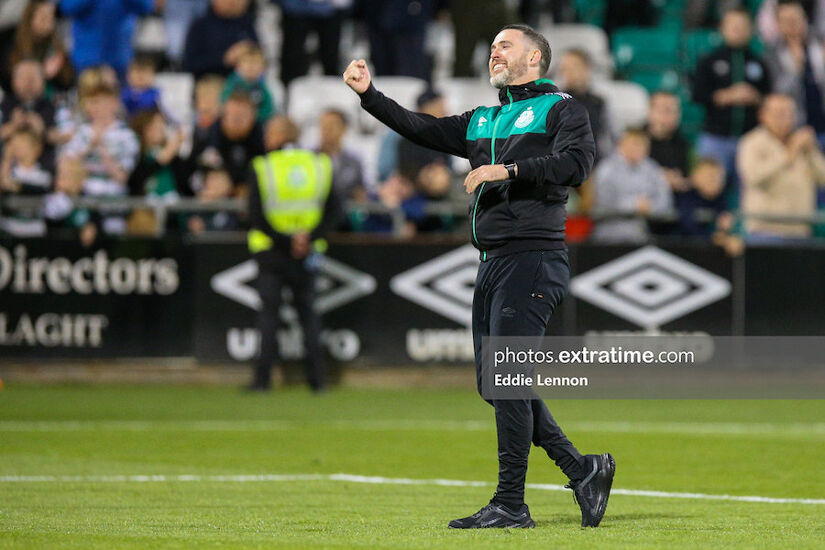 Stephen Bradley: 'We are at our best when we play with fear that we can get beaten. When we do that it give us that little edge, in and out of possession.' Credit: Eddie Lennon (ETPhotos)

Travel chaos continues to cause League of Ireland clubs difficulties but when Hoops Head Coach Stephen Bradley finally arrives back home on Wednesday evening via Shannon he will toast with a glass of wine the successful completion of one of his team’s ambitions for the season.

Shamrock Rovers’ 2-1 away win in Skopje, backing up the first leg 3-1 victory in Tallaght, has set up a Europa League play-off against Hungarian champions Ferencvaros. Win that and Rovers return to the group stages of the Europa League for the first time since 2011 (and bank €3.6m).

Any wounds from a play-off defeat would be soothed by automatic entry into the group stages of the Europa Conference League (and a €3.3m reward for that).

Asked to reflect on what group stage qualification means after the game Bradley said: “It is something tomorrow evening when I'm sitting down with a glass of wine with my wife that I'll have a look and think about. It is something we set out at the start of the year and we have achieved it. That has always been our aim in the dressing room.”

Bradley was the manager in 2019 who ended the 32-year wait to win the FAI Cup and has won the last two league titles and so the last remaining item to be filled in his palmarés was group stage qualification. That item is now very much ticked.

The 5-2 aggregate defeat in the Europa Conference League play-off last year to Flora Tallinn was a painful one but Rovers used that as motivation and have reaped the rewards this season.

“It was one of our targets for the year to go one step further than last year. We let ourselves down against Tallinn although they were a good side we didn't perform. As a group we learned from that and it made us stronger.

“The job isn't done though, we are going to the group stages to win games and do our best to get out of the group.”

Win the play-off against Ferencvaros and higher calibre opposition will await Rovers and Bradley is keen for that.

“The bigger the game, the better we are. We show up. We are at our best when we play with fear that we can get beaten. When we do that it give us that little edge, in and out of possession. I thought we brought that tonight.

“It brings the best out of you. It has you on edge. That nervous energy the players experience, they have to channel it to sharpen you mind. We have shown over the years we are at our best when we are up against it.”

Bradley hailed his captain fantastic Ronan Finn after the game although the skipper’s yellow card means he will miss the first leg of the play-off.

“I thought he was immense. His energy and his press and how he managed the game. He was fantastic and we are disappointed he will miss the next game. He was brilliant. He is so reliable and he set our press and the tone of the play.

“I thought all the players were fantastic tonight. We knew we had to go up a few levels from last week and I felt we did that tonight.”

extratime.com asked Bradley about the confidence that comes from their run in Europe this season – they have four wins and a draw from their six games played so far with a minimum of eight more matches now to come into the first week of November.

“The players can take confidence from their performances in Europe. We know next week is a step up again but we have shown we are ready to step up. The bigger the game, the better we perform.”

The Hoops travel back to Shannon on Wednesday before travelling north to take on Derry City on Friday night.

“We are really disappointed,” said Bradley about not getting a landing slot in Dublin to allow a direct flight home. “We found out that CSKA Sofia are flying in and out direct (for their game against St. Patrick’s Athletic) and serious questions need to be asked of those who are making those decisions. It is not acceptable. How can the Irish teams not do that?

“I understand travel is chaos for everyone at the moment but both Bulgarian teams were able to fly in and out of Dublin direct but we have to go out through Shannon. It cost us against Ludogorets with the travel for the first leg and I hope it doesn't cost St. Pats at home.

“We asked last week to move the (Derry) game to Saturday or Sunday. We didn't want it off but the league came back and said no which I found strange. That is really poor from them.”

Travel update: Fog in Shannon Airport meant that Rovers were diverted and landed at Dublin Aiport at 5am on Wednesday morning.