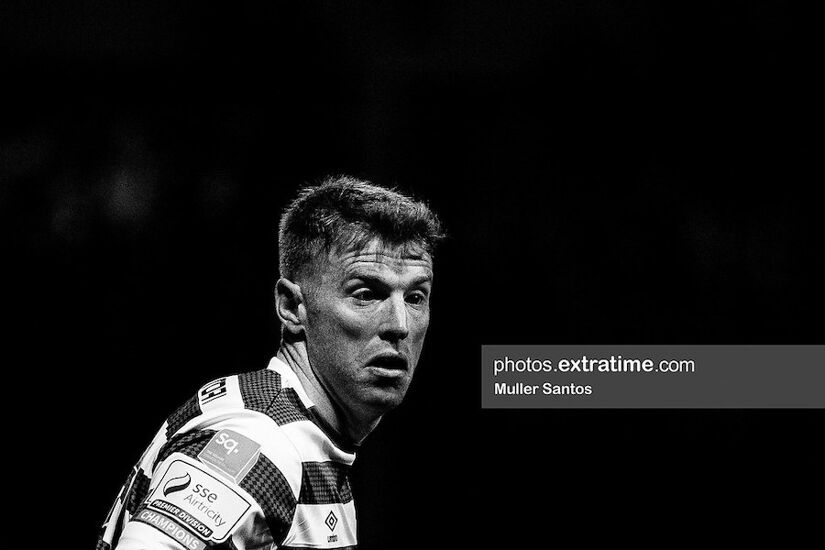 It was an historic night for Shamrock Rovers as the Hoops secured European group stage football by beating Shkupi 2-1 in Skopje to win this Europa League third qualifying round tie 5-2 on aggregate.

Rory Gaffney and Aidomo Emakhu were the goalscorers for Rovers in a superb 2-1 second leg win and the Hoops will now play Ferencvaros in Budapest next week in the first leg of their Europa League play-off.

Rovers know that even if they lose to the Bulgarian side (who were eliminated from the Champions League qualifiers by Qarabag 4-2 on aggregate) they will go directly into the Europa Conference League group stages.

It means that a very minimum Rovers will earn €3.3m from this European campaign but Stephen Bradley’s side will want to win the upcoming play-off to get back into the Europa League group stages as they managed to do in 2011.

It was quite an open first half with the home side having the very early chances – including from a couple of corners in the opening minutes - but the Hoops probably felt unlucky not to take a half time lead in to the break.

That was particularly the case as Rory Gaffney’s shot was touched onto the post by Kristijan Naumovski after just three minutes.

Five minutes later Shkupi should really have taken the lead. Central defender Senghor Faustin, up for a set piece, saw the ball fall to him inside the six yard box but his touch took the ball over Alan Mannus’ crossbar.

Eight minutes from the break Rovers pressure forced Shkupi into coughing up the ball and the visitors should have made them pay. Ronan Finn got the ball with Naumovski caught out of goal and his cut back was drilled on target by Richie Towell. However Faustin was in a fine position to block and when Gaffney followed up the Shkupi keeper was on hand to save.

Unlike their earlier European game in Malta, when the Hoops led Hibernians 3-0 after the first leg, Rovers weren’t afraid to commit men forward and exploit the space left by Shkupi attacks.

Goce Sedioski made a triple change at half time as they looked to get back into the tie, including two of the three home players booked in the first half.

Just after the hour mark Gaffney grabbed the opener. He drove at the Shkupi defence and his shot took a slight touch to take it over the head of Naumovski.

With the Hoops three goals up in the tie, Bradley withdrew Gaffney and Finn (whose yellow means he will miss next week’s game in Budapest) bringing on fresh legs in the form of Sean Gannon and Sean Kavanagh.

Shkupi were reduced to hitting long shots from distance but Mannus still needed to be on his toes on what was his 50th appearance in Europe during the 40-year-old goalkeeper’s career. Georgiev, with a header, and Alvares, with a long shot from distance were on target and needed Mannus to push out on both occasions.

The Hoops doubled their lead late on as substitute Aidomo Emakhu raced in on goal to a Burke pass beating Naumovski to the ball and was able to tap home into the empty net to round off the win. The North Macedonian side did score a goal deep in injury time through Sundat Adetunji with a shot from distance but it was all too late for them.

The result means Rovers will be playing European football right to the start of November and it just remains to be seen whether that is Europa League or Europa Conference League group stage football.