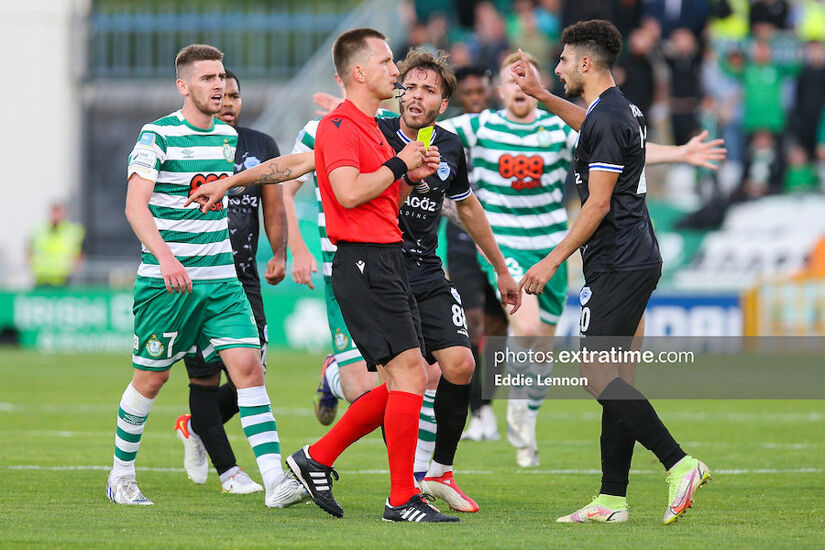 Rovers goalscorer from the first leg Dylan Watts watches on as Walid Hamidi gets his first of two bookings in Tallaght Credit: Eddie Lennon (ETPhotos)

The North Macedonian champions will have to overcome a two goal deficit in the second leg of their tie against Shamrock Rovers if they are to make the Europa League play-off (kick off 8pm Irish time).

Last year in the Europa Conference League qualifiers, they won their first ever European tie defeating Llapi from Kosovo 3-1 on aggregate (having won 2-0 at home and drawing 1-1 away).

While this season in the first round of the Champions League, they eliminated Lincoln Red Imps after winning 3-0 at home in the first leg but losing 2-0 in the second leg.

Shkupi have yet to play a league game this season, their first league fixture that was set for Sunday 7 August was postponed. Following the first leg in Tallaght, Walid Hamidi’s red card and the third yellow card for Reneldo Cephas of his European campaign mean Shkupi will be without those players for Tuesday’s game.

While Shkupi’s home ground is the Cair Stadium in the Macedonian capital of Skopje, the second leg of this Europa League third round qualifier will take place in the National Arena Todor Proeski.

The winner of this tie will enter the Europa League play-off and travel away first to face the loser of the Champions League third round qualifier between Qarabag and Ferencvarosi. Those teams drew 1-1 in Azerbaijan last Wednesday so Ferencvarosi will be slight favourites with the second leg to come at home for them in Budapest on Tuesday. The match kicks off an hour earlier than this tie.

The loser from the Rovers/Shkupi tie drops into the Europa Conference League playoff to play at home first against the winner of the Ballkani and Klaksvik Conference League qualifier. Ballkani won the first leg at home in Kosovo 3-2 with the second leg to come in the  Faroe Islands next Thursday (kick off 7pm Irish time).

Gary O’Neill’s injury time goal to give his team a 3-1 first leg win could well be crucial as the Hoops seek qualification for the group stages of a UEFA club competition for the second time.

Across the four seasons with the club, O’Neill has played 101 games in all competitions for the Hoops but last Thursday night was only his fourth goal for Rovers.

“It  was one of the most special occasions in Tallaght Stadium that I can remember,” said Hoops Head Coach Stephen Bradley about O’Neill’s last strike.

“A goal with the last kick of the game in a European match a really important goal and a fantastic finish. It was very important that we came over here in front, the third goal might turn out to be very very important, we won’t know until after the game.”

Equally as important as O’Neill’s late goal in Tallaght was Alan Mannus’ display, with the 40-year-old goalkeeper pulling off a string of fine saves in the first leg and he is set to play his 50th career game in Europe in the second leg.

“Alan had to make some brilliant saves throughout the game, in the first half as well. He probably had to make too many saves from our point of view. But Alan just proves how important he is to the team.”

Emerge victorious from this tie and a Europa League play-off awaits the Hoops and they would be safe in the knowledge that even if they lose that play-off they will make the groups stages of the Europa Conference League.

So a lot rides on the 90 minutes (and possibly longer) in Skopje on Tuesday evening when they took a Shkupi side who were only eliminated from the Champions League second qualifying round 3-2 by Dinamo Zagreb (who were the highest ranked team in that round).

“We have to be very careful. We have to go and win the game. We know that we are in for a really tough game and our mentality is that we have to win the game. I’ve no doubt that they will be very dangerous.

“I’ve said before that any team that can run Dinamo Zagreb so close is a very good team and they showed that in the second half in Tallaght.”

Bradley will be able to call upon the services of Jack Byrne who trained with the team on the eve of the game but Chris McCann’s calf injury means Rovers will miss the midfielder who has been excellent for the Hoops in Europe this season.

#refwatch Aleksei Kulbakov from Belarus is the referee for the Shkupi v Shamrock Rovers game in North Macedonia on Tuesday. Not the first time for him to charge of a Rovers game. He was ref for 2011 Europa League group game in Tallaght against PAOK. pic.twitter.com/ro2SFFHIXK

Should Rovers skipper Ronan Finn play in North Macedonia he will move to within one appearance of the all-time League of Ireland record that is held by Gary Rogers (with 54 European match appearances).

Graham Burke’s penalty in the first leg of this tie moved him to seven goals in European action. Only three League of Ireland players have scored more – Jason Byrne (10), Glenn Crowe (11) and David McMillan (14).