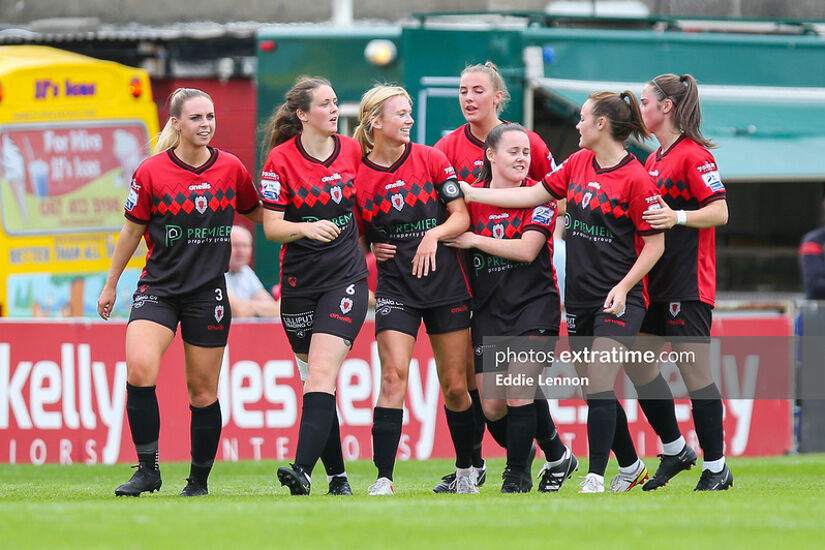 Bohemians march on to the semi finalof the FAI Women's Cup following a win over Sligo Credit: Eddie Lennon (ETPhotos)

After a busy Saturday afternoon of WFAI Cup action the four favourites emerged and are in the semi final draw with wins for Bohemians, Shelbourne, Wexford Youths and Athlone Town.

In the opening game of the day, first half goals from Abbie Brophy, Erica Burke (penalty) and an own goal just before the break saw Bohemians race into a three nil lead over Sligo Rovers in the opening period. Steven Feeney’s outfit regrouped for the second half and a Lauren Boles strike within the opening six minutes briefly threatened a comeback, however the Phibsborough outfit prevailed to become the first name into the final four.

Early goals were also a feature of game number two of the afternoon with a brace from Alannah McEvoy putting visitors Peamount United two goals to the good within the opening quarter of an hour. However, Shelbourne clawed their way back into contention with goals from Jemma Quinn and Jessica Gargan tying up the scores with five minutes remaining of the half. Quinn netted her second on the stroke of the interval to complete a pulsating opening period. Despite seeing five goals in the opening forty five minutes, there were none for the second half as the Tolka Park outfit remain in contention for another final this season.

Their conquerors in 2021, Wexford Youths, left it late to overcome a spirited DLR Waves outfit who ended up playing the final twenty minutes with nine players following the dismissals of Mia Dodd on 54 minutes and goalkeeper Eve Badana fifteen minutes later. The South Dublin outfit battled resolutely and held a one all scoreline- courtesy of a goal from Katie Malone which was cancelled out by a Nicola Sinnott strike late in the first half- with just under ten minutes to go. A deft Ellen Molloy flick found the DLR net to edge the holders into the lead before Ciara Rossiter made sure of their progression with a strike in the final minute.

The final game of the evening saw Athlone Town advance at the expense of Cork City. However, the two nil scoreline in favour of the home side wasn’t reflective of the chances created by their visitors who were unlucky not to take the lead in the first half when Christina Dring’s effort hit the woodwork and Athlone were finding it difficult to deal with corner kicks from the Leesiders. However, buoyed by their first period reprieve, the Midlanders scored twice ,courtesy of strikes from Muireann Devanney and Gillian Keenan ,in the second half to ensure they became the final name in the hat ahead of the semi final draw.