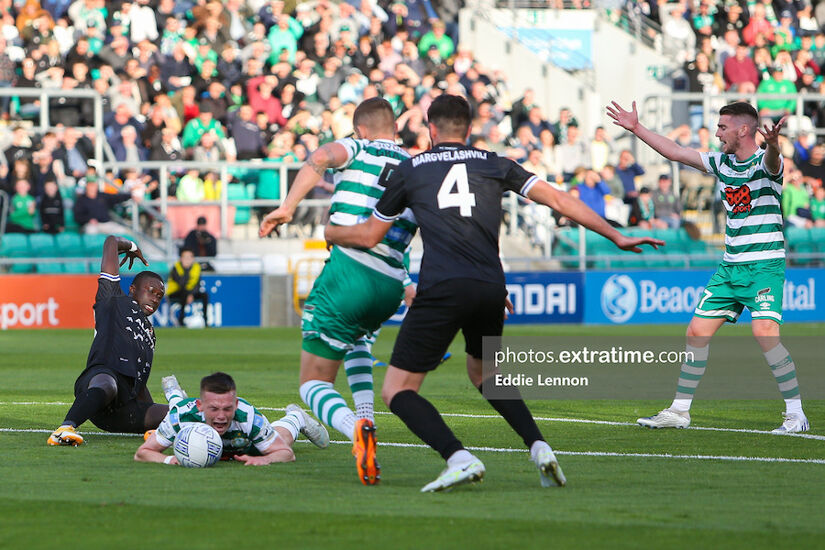 The European third round qualifiers have reached the half way point. So where do the ties stand for the League of Ireland clubs, how did they prospective play-off opponents get on and what does it all mean for the LOI club bank accounts and the UEFA coefficent?

Gary O’Neill’s 96th minute goal gives them a 3-1 lead to take to Skopje when they play the second leg of their Europa League third round qualifier against Shkupi on Tuesday.

Ahead of the game the North Macedonian side derided having to land in Shannon rather than Dublin Airport as an evil conspiracy involving the Hoops and the Irish government and the subsequent match in Tallaght was just as entertaining.

The winner of this tie will enter the Europa League play-off and travel away first to face the loser of the Champions League third round qualifier between Qarabag and Ferencvarosi. Those teams drew 1-1 in Azerbaijan last Wednesday so Ferencvarosi will be slight favourites with the second leg to come at home for them in Budapest on Tuesday (kick off 7pm Irish time).

The loser from the Rovers/Shkupi tie drops into the Europa Conference League playoff to play at home first against the winner of the Ballkani and Klaksvik Conference League qualifier. Ballkani won the first leg at home in Kosovo 3-2 with the second leg to come in the  Faroe Islands next Thursday.

The Saints stunning 1-0 first leg win in Sofia thanks to a late goal from substitute Serge Ataki sets them up nicely for the second leg to come against CSKA next Thursday in Tallaght.

The Athletic will look to put their travel difficulties behind them for the second leg of this Europa Conference League qualifier - once they can get home from Bulgaria. By Friday the Saints had already sold over 4,000 tickets for the game in Dublin 24.

Should the Sainst beat CSKA Sofia, they will play the winner of the Brondby or Basel Europa Conference league qualifier. In Denmark during the week Brondby won 1-0 ahead of next week’s trip to Switzerland.

Should the Saints be eliminated by CSKA, they will earn €0.75m from their European campaign this season. Beat the Bulgarians and get to the play-off and it would guarantee the Athletic €1.05m. Group stage qualification would earn Pats a minimum of €3.3 m.

The Bit O’ Red were well beaten by Viking in Stavanger last Thursday in the first leg of their Europa Conference League third round qualifier.

Should they somehow overcome the 5-1 deficit in the Showgrounds, they will play either Dunajská Streda or FCSB. In Slovakia last Wednesday Dunajska earned a 1-0 home win to take to Bucharest for the second leg on Thursday.

If the Bit O’ Red exit at this stage to Viking, they will bank €0.85m. A miracle result would see that jump to €1.15m for making the play-off round.

As President of Ireland, may I congratulate Shamrock Rovers and St. Patrick's Athletic on their fantastic first leg victories last night in the Europa League and Europa Conference League qualifying rounds.

The Republic of Ireland came into this season ranked 40th on UEFA’s country coefficient table but, with sevenswins and three draws from the 15 European games played to date, the league has moved up two additional places as it stands.

Shamrock Rovers have three wins and a draw (from five games), Sligo Rovers three wins (from five matches)and undefeated St. Patrick’s Athletic a win and two draws. Derry lost both of their games.

Adding the last five seasons together gives the overall coefficient of 9.125 (up from the 8.125 at the start of the European campaign).