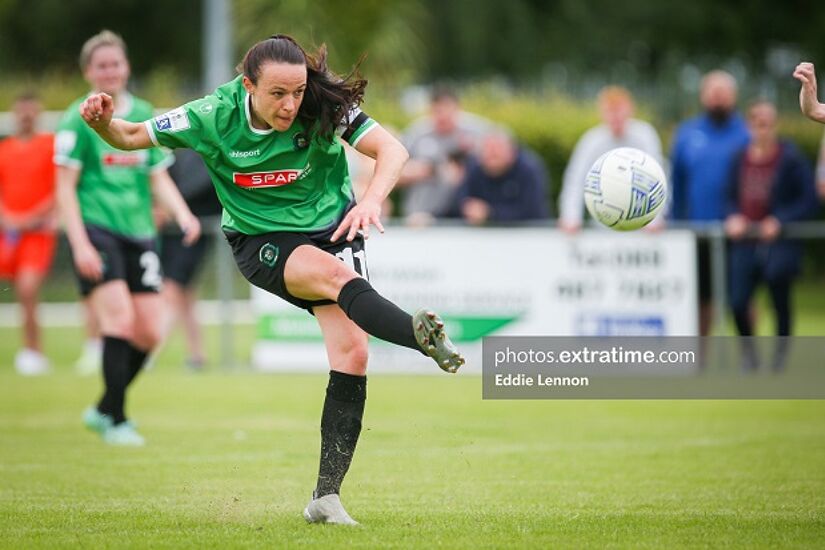 Saturday is a busy day with all four ties in the Women’s FAI Cup quarter finals taking place throughout the course of the day.

Bohs lie five points above their visitors in the league table but have played a game more.

Despite this deficit, the Bit O’Red won’t be coming into the game overawed by the occasion as they performed heroics last weekend in front of the visiting TG4 cameras to record a stunning victory over league champions Shelbourne thanks to goals from Donegal natives Gemma McGuinness and Emma Doherty.

For their part, Bohemians have already recorded two victories over Sligo in the league this season, winning 3-1 at the Showgrounds in March before a 2-1 home victory in July.

In the first round of this competition, it took a late penalty from Erica Burke to book their place in the final eight with victory over Galway WFC while Sligo Rovers received a walkover against Cork based outfit Douglas Hall FC.

With little to choose between the sides based on their league positions, the greater experience of Bohs could prove the difference although Sligo could pull off a surprise especially with the recent acquisition of former WNT international Amy Boyle-Carr.

The second tie of the day is the battle of the league champions against their title rivals Peamount United. Both sides have a wealth of experience with legendary USA international Heather O’Reilly’s addition to the Shelbourne squad making national news of late.

Despite her arrival, Noel King’s side surprisingly lost away to Sligo Rovers in the league last weekend – the three goals conceded by Amanda Budden were the first time this season she had conceded more than once in a game.

Last season’s runners up will be looking to go one better this season and lift the cup for the first time since 2016. However, standing in their way are the 2020 league and FAI Cup winners Peamount United.

Under the stewardship of James O’Callaghan, the Peas have been one of the most consistent performers in the league in recent seasons and, like Shels, their current squad is full of title winners and experienced internationals – the trio of Aine O’Gorman, Karen Duggan and Stephanie Roche to name but a few who will be chomping at the bit to put one over on Shelbourne in the cup.

However, with Noel King’s side having had a scare last weekend with that Sligo defeat and keeping fourteen clean sheets from their nineteen games, they are the favourites to emerge from this titanic battle.

Wexford Youths currently lie second in the table, five points behind Shelbourne with a game in hand while DLR Waves occupy sixth position.

The 2021 winners saw a number of departures during the off season including defender Lynn Craven relocating to the South Dublin based outfit where she currently lines up in a defence which also includes the outstanding Eve Badana – the former Cork City netminder is a regular fixture in Vera Pauw’s international squads though has yet to make her competitive debut.

At the other end of the pitch, Katie Malone has already netted five times in the league this season and scored in the first round victory over Treaty United. Youths received a bye to the quarter finals so their last game in the competition was that memorable 3-1 victory over Shelbourne last November.

Skipper Kylie Murphy raised the trophy to jubilant celebrations to cap off a remarkable year where she found the net a dozen times in the league. She’s reached half that tally already and is joined on the goalscoring trail by the prodigious Ellen Molloy – the 18 year old has netted ten goals in twelve league starts this campaign as well as sitting her Leaving Certificate.

With the battle lines drawn between the DLR defence and Wexford’s firepower a goalless draw is unlikely with the Slaneysiders favourites to come out on top in what promises to be an entertaining clash at Ferrycarrig Park.

Cork City occupy second from bottom of the table while their hosts are in third position and the last league encounter between the sides saw Athlone prevail courtesy of a single Emma Corbett strike.

Having tasted defeat twice in the FAI Cup Final Cork’s Christina Dring is one of the most experienced players in a young squad this season. The 2020 Cup finalists may be towards the bottom of the table currently but there are a number of talented teenagers in Danny Murphy’s squad including Lauren Shine and Eva Mangan as well as former international Zara Foley (20).

With a comfortable victory over Donegal outfit Bonagee United in the First Round, City have shown they have goal scorers littered throughout the squad with seven different scorers on that occasion.

For their part, hosts Athlone Town are the surprise package of the 2022 WNL season so far. Perched in the heights of the battle for the league title, the Midlanders are well equipped to go far in the FAI Cup having reached the quarter final stages courtesy of a 7-0 victory over Whitehall Rangers – Emily Corbett netting a hat trick to go with the seven league goals she has acquired so far this season.

Add that to the four scored by former Sligo Rovers Underage player Roisin Molloy and Athlone’s potency in front of goal is clear to see. In defence, Scarlett Herron and Fiona Owens bring experience from the Peamount setup with Jessica Hennessy and Kelsey Munroe also adding know-how to the backline marshalled by Niamh Coombes who last experienced the FAI Cup quarter final with Kilkenny United in 2018.

Athlone Town will be the favourites to progress and may be a dark horse for the competition itself, however on their day Cork City can give most teams in the league a run for their money so a tense encounter may be in store.