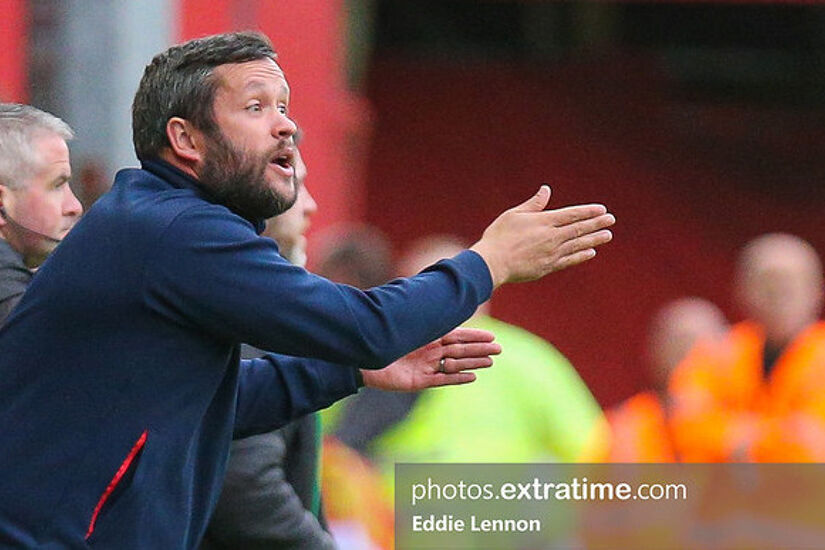 Tim Clancy: 'I think Mura looked at us as an easy touch - they’ll have a different outlook in the 2nd leg'

St. Patrick’s Athletic manager Tim Clancy admitted that his side should have beaten NS Mura in the first leg of their UEFA Conference League second qualifying round but feels the manner of the performance should give the players lots of confidence heading to Slovenia next Thursday.

Chris Forrester’s goal on the hour mark brought the Saints level after they gifted the Slovenians a first half lead and the midfielder almost scored arguably the greatest goal an Irish club has ever scored in Europe after he was denied following a dazzling run into the box late on.

“Proud of the players first and foremost,” said Clancy after the 1-1 draw. “They're a good team with a lot of good players, we go behind with a soft goal - a mistake from Brocky [Harry Brockbank] gives them something to hold onto in the game.

“We didn’t veer away from how we wanted to play and on the overall balance of play we should have got the win to bring over there, but listen it’s a positive result. I hope the performance gives the lads the confidence to get through the tie.

“The really pleasing thing is that we didn’t shy away from getting on the ball and passing it and going across the back three, back to the keeper. Jo [Anang] played quite well too – he made a great save. We are pleased that we stuck to the way we play.

“I don’t think Mura will be as laid back as they were tonight. I think we were excellent and I think they looked at us as an easy touch and I think the fans and the atmosphere and the performance of the lads I think they’ll have a different outlook in the second leg,” he added.

Forrester’s goal came from a cleverly worked throw in routine and that goal had been coming after Pats spurned a host of good chances on the night. Clancy was also full of praise for debutant Barry Cotter who slotted in seamlessly at right wing back just two days after joining from Shamrock Rovers.

“Chrissy gets a good goal it’s an opportunist throw in from Barry Cotter to Eoin Doyle and it’s a great touch and finish. Then Chris’s chance - that’s what he’s capable of he was very unlucky and I am sure if that ball goes into the net we would be talking about one of the best European goals the club has ever seen.

“Barry is a very athletic kid because of the strength of the Shamrock Rovers squad he probably wasn’t getting enough game time, the opportunity came up to get him in and we jumped at it because we knew his attributes.”