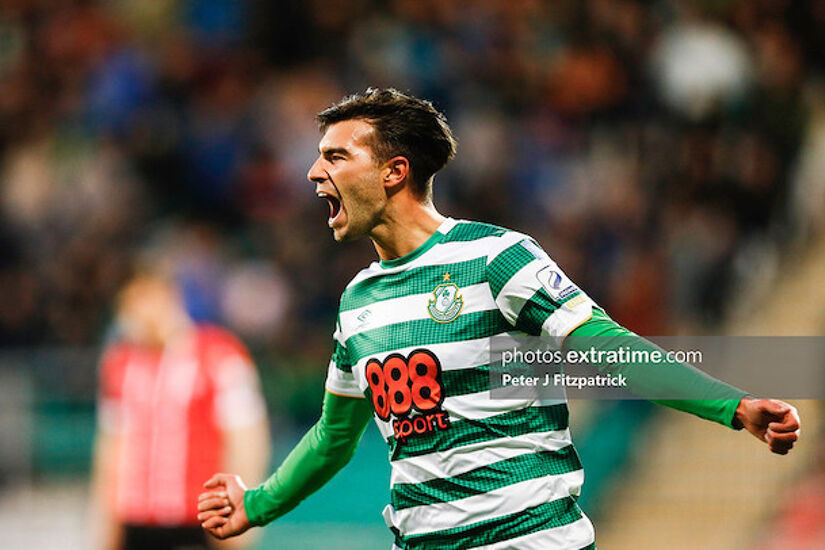 Mandroiu and McGuinness make move away from Shamrock Rovers

Shamrock Rovers saw the departure of Danny Mandroiu and Dara McGuinness from the club on Thursday.

With Lincoln City exercising the five figure release clause for the 23-year-old player who was out of contract at the end of the season, Mandriou, who is currently out with an ankle injury, will now depart for the League One side.

Rovers confirmed on twitter the departure of the players noting ‘we would like to thank Danny for his contribution to Shamrock Rovers over the past 18 months and we wish him all the very best in his future career’.

The player signed from Bohs in 2021 was a crucial part of Rovers’ title winning success last season. He scored 15 goals in 35 league appearances which earned him a call up to the Republic of Ireland senior squad.

This season he is joint top scorer in the league for the Hoops with Graham Burke on seven goals from his 15 starts and three substitute appearances.

“I would like to thank everyone at Shamrock Rovers for the past two years, the gaffer (Stephen Bradley), the management staff and the fans,” said Mandroiu on Instagram. “I loved every minute of playing for this special club.”

“I loved every minute of playing for this special club”

All the best, Dano pic.twitter.com/YD6pEnyNGQ

McGuinness on the move

The 18-year-old was previously on the books with St. Patrick’s Athletic but joined the Hoops in 2020. He played with Rovers’ under-17 and under-19 squads and made an appearance in the First Division with the Rovers II side in 2020.

“Dara has been unbelievable since coming to the Football Club in 2020,” said Rovers’ Academy Director Shane Robinson. “ His appetite for hard work and his dedication to train and constantly improve has been brilliant to watch. We wish him every success on his move to Stoke and hope to see him continue his development.“