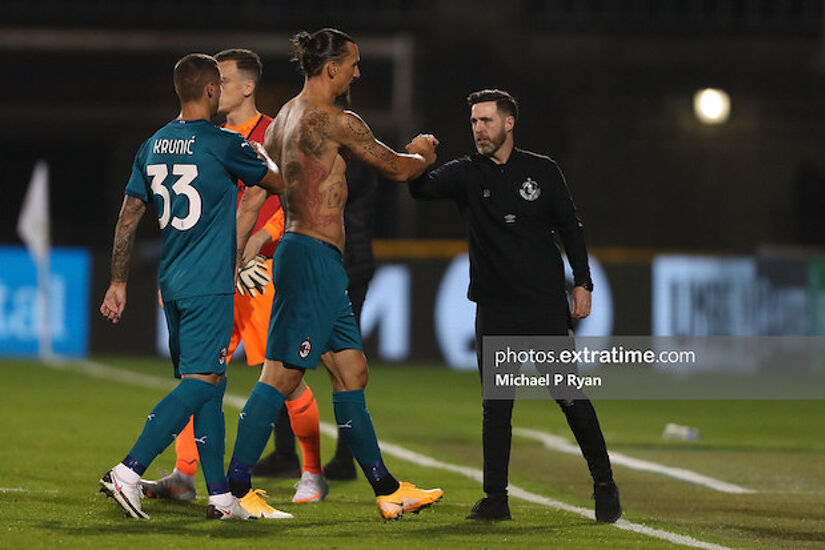 The Hoops aim in the past couple of seasons has been to put together a squad capable of winning the League of Ireland title while competing at the group stages of one of UEFA’s European competitions.

The back-to-back league champions who sit ten points clear with 13 games remaining (second placed Dundalk have 15 matches to play) begin their European campaign on Tuesday night in the Champions League first qualifying round first leg against Hibernians of Malta as the seeded team.

Beat the Maltese champions in this tie and they are guaranteed another three rounds in Europe and at the very minimum a play-off in the Europa Conference League.

Last season, when unseeded, they fell at this first hurdle to Slovan Bratislava to drop into the Europa Conference League qualifiers where, having beaten Albanian side Teuta home and away, they were knocked out by Flora Tallinn in the play-off round.

Injuries have hit the Hoops hard in the build up to the game along with confirmation of Danny Mandroiu’s departure to Lincoln not helping the situation.

The Hoops have earned a major transfer fees for Gavin Bazunu, Liam Scales, Aaron McEneff and Graham Burke (who has since returned) but with Mandroiu’s contract up at the end of this year, his release cause isn’t anywhere near the six figure sum you’d expect to see.

Madroiu’s ankle issue meant he was out anyway but both Jack Byrne and Graham Burke are massive losses due to injury. Byrne was the standout player for Rovers during his previous spell at the club, while Burke is the Hoops all time highest goalscorer in Europe.

With Sean Gannon and Neil Farrugia also out, Bradley’s squad will be tested but the expectation is that they should have the quality to get by the Hibernians – particularly as the Peacocks are without four players due to suspension.

Speaking about their opponents, Stephen Bradley said: "We've watched quite a lot of them. There's a lot of changes in their team whether it's through suspension or players leaving. They've brought in a lot players in the last two weeks.

"We have a real feel for them from last year but with the new players they might change their system and might change how they play.

"They're always possession-based teams, they always have been. They went and played Flora Tallinn last year(losing 5-0 to them on aggregate) and had the majority of possession in both games.

"So we know they like to play with the ball. They've got technical players and real pace out wide. They played a similar system to ourselves for a large majority of last year but they've also changed to a 4-3-3 as well, so we'll have to wait and see how they set up tomorrow."

Maltese champions Hibernians travel to Tallaght still in their pre-season - the Maltese Premier League doesn't begin till mid-August - and with their manager, captain and vice-captain all suspended after the controversial elimination from Europe last season – when their reaction to Irish referee Rob Hennessy’s performance earned them lengthy suspensions.

They have signed a number of new players in the run up to Tuesday’s game due to the fact that Bjorn Kristensen, Ferdinando Apap, Andrei Agiius and Jake Grech are all suspended for the tie.

The Peacocks played in the Champions League qualifiers last season despite finishing only runners up the previous season.

The 2020/21 champions Hamrun Spartans were excluded from the Champions League due to a match fixing scandal from 2013.

Hibernians were dumped out of the Champions League qualifiers at this stage last year by Flora Tallinn, losing 3-0 at home and 2-0 away.

The Estonian champions went on to eliminate the Hoops in the Europa Conference League play-off – winning the first leg in Tallinn 4-2 and the game in Tallaght 5-2.

Last season Rovers won three matches in a row in Europe for the very first time. The winning margin over Teuta was their largest in Europe since 1982 (3-0 on aggregate) and just the third time in a European tie they kept clean sheets in both the home and away legs.

Stephen Bradley has been a charge for a record number of European matches for Shamrock Rovers with 19 ahead of Michael O’Neill’s 16. He has seven wins, four draws and eight defeats. Michael O’Neill managed three wins in Europe from his 16 matches while  John Giles won four of his eight European games.

The Hoops have never played a team from Malta. There have been five ties previously between League of Ireland sides and Maltese teams. LOI clubs have won four, drawn three and lost three matches.

Rovers skipper Ronan Finn is the club’s record appearance holder in Europe – he has lined out 31 times for the Hoops in European action. Overall he has played 47 game in Europe (Sean Gannon has 42) – only Gary Rogers with 54 has more with a League of Ireland club.