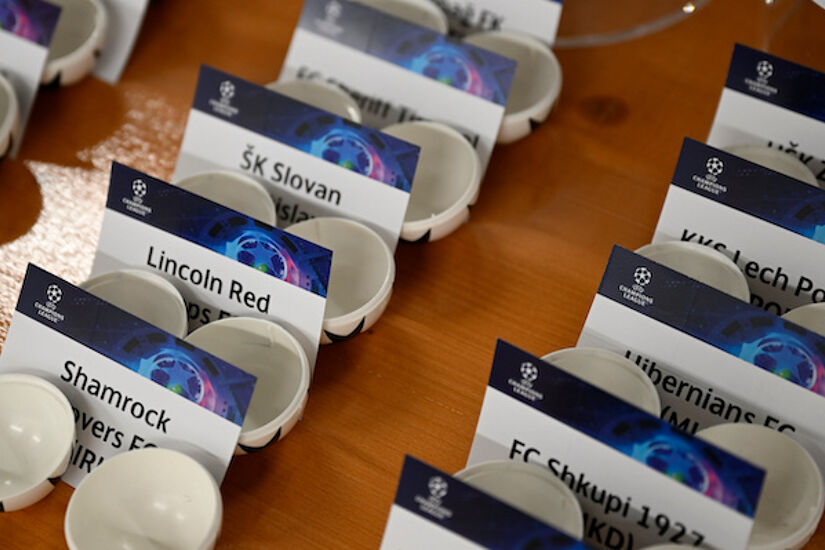 A detailed view of the draw cards, balls and pots during the UEFA Champions League 2022/23 First Qualifying Round draw at the recent UEFA HQ Credit: Extratime Team (ETPhotos)

Shamrock Rovers play the first leg of the Champions League first qualifying round against Hibernians on Tuesday at Tallaght Stadium (kick-off 7.30pm). extratime.com take a look at their opponents.

So who are Hibernians?

Founded as Constitutionals FC, they were a club set up a century ago this year representing the pro-British Constitutional Party in Malta.

After that political party had upset the Catholic Church so much that it was made a mortal sin for Catholics to vote for the party, the football club changed its name in 1932 to Hibernians FC in reference to Scottish side Hibernian, a club founded by Irish Catholics in Edinburgh.

They are the 13 times Maltese champions having won the Maltese Premier League by three points from Floriana last year. In the previous three seasons, they finished runners up twice along with a third place.

Maltese international Jurgen Degabriele will be the one Rovers will be keeping an eye on. He was top scorer for the Peacocks in the league last year with 14 goals.

Lorenzo Fonseca will be familiar to Rovers’ defender Pico Lopes as the pair are Cape Verde international teammates – Fonseca was in the Blue Sharks squad in 2019 when Lopes made his international debut.

Brazilian defender Rodolfo Soares has returned the club who are struggling at the back for this upcoming tie due to suspensions. The 37-year-old spent seven seasons at the club playing over 200 matches.

They have also signed Maltese International defender Kurt Shaw who played in six of Malta's World Cup qualifiers but missed the recent UEFA Nations League games due to an injury.

25-year-old Aruban striker Terence Groothusen has also come into the club bringing experience from his time in the Netherlands and most recently Germany with Alemannia Aachen in the Regionalliga West - the fourth tier of the Bundesliga.

Which players do we have to thank Irish referee Rob Hennessy for that they are suspended for this tie?

Hibs have four players suspended for the upcoming game after quite the controversial game last year officiated by Irish referee Rob Hennessy.

Hibernian were not happy with how Hennessy performed in their Europa Conference League third qualifying second leg against Riga last season after they brought a 1-0 first leg league back from Latvia. They felt he lost order in Malta of the match.

Here is how the Times of Malta reported it:

‘The match was marred by the controversial refereeing of the Irish referee Hennessy who awarded a very dubious penalty to Riga inside the first minute of the match and also annulled a Jurgen Degabriele goal midway through the second half for an inexistent offside position which would have sealed Hibernians passage to the next round.’

Because of the finish to the game and the aftermatch, Hibernians will miss their captain Bjorn Kristensen who is serving a four match UEFA suspension and Ferdinando Apap will miss both legs of the tie as will Andrei Agiius. Jake Grech will also miss the game in Tallaght.

What European pedigree do Hibernians have?

Unlike Shamrock Rovers, Hibernians have never played in the group stages of a UEFA competition. They have played in Europe every year over the last decade bar 2019. In the covid-hit 2020/21 season, they beat Liechtenstein Vaduz 2-0 away in the first round and lost in the second round to Hungarian side Fehervar at home 1-0 (who had beaten Bohs on penalties in the previous round).

Last season they played three ties in the Europe, having been handed a place in the Champions League qualifiers having finished only runners up the previous season. The 2020/21 champions Hamrun Spartans were excluded from the Champions League due to a match fixing scandal from 2013.

The Head Coach is 55-year-old Italian Stefano Sanderra who has been at the club in the role since 2018 and has extended his contract for another two years following last season’s league title win.

What are Hibernian’s recent results?

The Maltese league runs through a winter season so they come into this European fixture from their pre-season. The league doesn’t start till 20 August.

The club's home ground is the 3,000 capacity Tony Bezzina Stadium in Paola but the second leg tie will be played in the Centenary Stadium adjacent to the Maltese National Stadium in Ta’ Qali.

Ludogorets (Bulgaria) or Sutjeska (Montenegro) are the opposition set for the second qualifying round of the Champions League. Winners of that tie will be guaranteed at least an appearance in the Europa Conference League group stages.

The losing side will drop into the second qualifying round of the Europa Conference League where they will face the defeated team from the Levadia Tallinn v Vikingur Reykjavik tie.