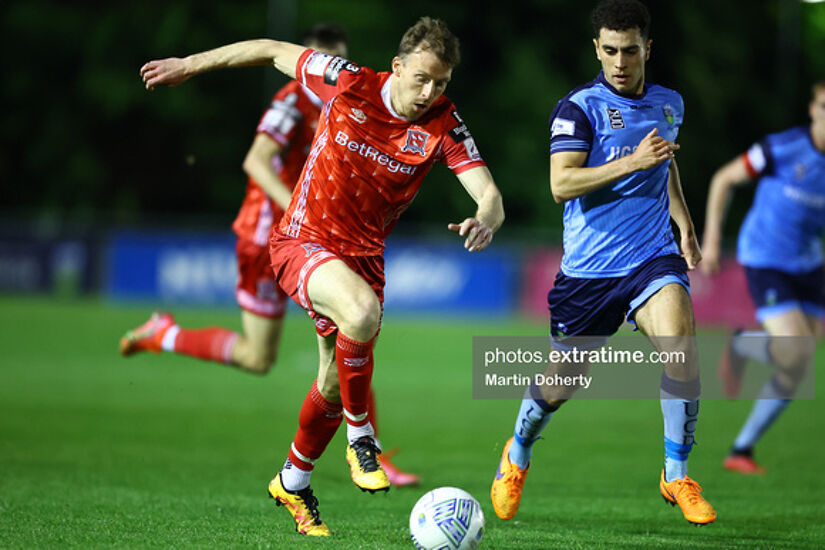 A trio of former UCD players came back to haunt their former club as Dundalk recorded a comfortable 3-0 victory over UCD at a sodden Oriel Park on Friday night to increase their unbeaten run to ten games and keep up the pressure on Shamrock Rovers at the top of the table. Goals from David McMillan, Greg Sloggett and Keith Ward proving the difference on the night.

The Students made two changes to their starting lineup following a narrow defeat away to Derry City the previous weekend with Adam Verdon and Thomas Lonergan replacing Donal Higgins and Sean Brennan.

In the dugout, Diarmuid McNally and Ger Barron were in charge following touchline suspensions for Andy Myler and his assistant William O’Connor.

For Dundalk, the hosts remained unchanged from their goalless draw at Tolka Park with the major talking point being the presence of Mark Connolly in the home defence- the on loan Dundee United centre back’s loan deal at Oriel Park was originally a six month deal and further clarification on his situation is expected in the coming weeks.

The opening half hour passed without a clear threat from either side- both outfits were missing their influential number nines due to injury with Colm Whelan and Patrick Hoban out of action. In fact, there were just less than ten minutes remaining in the first half when ex UCD midfielder Paul Doyle tested netminder Kian Moore with a rasping drive from distance.

The keeper was up to the task and pushed the effort over the bar before showing smart reflexes to deny another former Student in the shape of Greg Sloggett.

Dundalk were not to be denied for much longer however as five minutes into the second half, David McMillan swivelled on a Joe Adams knock down to slot the ball to the net from close range. The Dubliner’s first league goal for the club since scoring the winning goal against Finn Harps last season.

Within ten minutes Dundalk had their second of the contest, once again from a backpost knockdown. This time it was Mark Connolly’s header which ended up in the net after a combination of Evan Caffrey and Greg Sloggett appeared at the post.

In contrast to the scrappy nature of the second goal, Dundalk killed off the contest in the final minute of added time with a well worked team goal. Keith Ward took a John Martin cutbalc and passed the ball to the net to finish off a flowing move down their right hand side.

For UCD, next week they host Bohemians at the UCD Bowl looking to cut the three point gap to Finn Harps in ninth place, while Dundalk travel to Head in the Game Park in search of three points to stretch their lead over Derry City in second place to four points - Shamrock Rovers remaining ten points clear having played two games more than Dundalk.