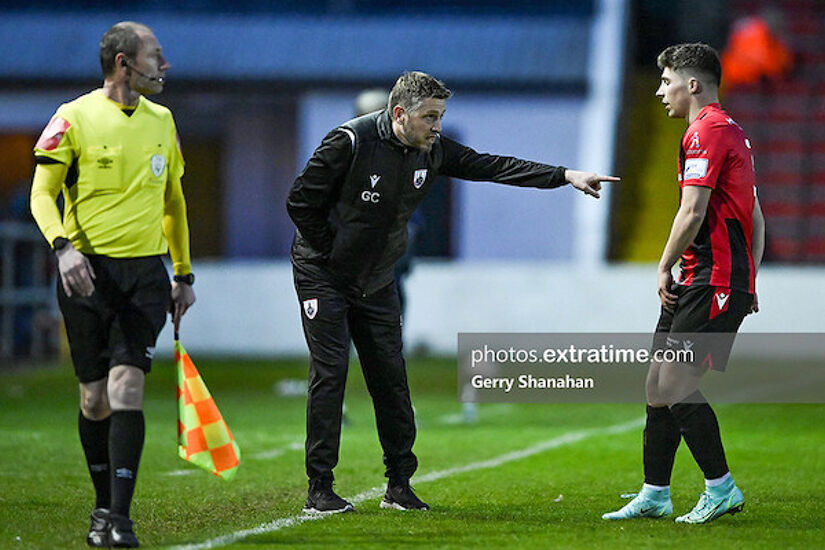 Player, coach, assistant manager and this season back as manager at Longford Town, Gary Cronin plans on leading his charges to a swift return to Premier Division football, despite the obstacle of overcoming full-time opposition clubs in a very competitive League of Ireland second tier.

Yet another product of Stella Maris, Cronin moved to Middlesbrough as a teenager with familiar ambitions to be a professional footballer.

“I went in 1997, for a year and a half, and it was difficult,” admitted Cronin when he spoke recently to extratime.com. “It’s probably the same now, but it wasn’t as easy then to stay in contact. I had to keep getting to a pay phone to stay in touch with home. I was a home bird then, so I struggled. I was only 18 and looked to come home too soon.

"Understanding more now and how resilient you have to be, I didn’t have it at that age. I’d love to grab that kid and say: ‘Stick with it and dig deep.’ I always regretted coming home before my contract was up because you never know in football what may transpire. You get over that and I had a really good League of Ireland career.

"I had a couple of options to go back over there on trials with other clubs, but decided to stay in Ireland. I had some really good coaches in Middlesborough and didn’t appreciate it. I learned so much without realising. When you develop as a player and then into coaching, you reflect on what you were taught at a young age and it really comes to light.

"We had a great Irish contingent over there and were all living together, which was what kept us all going.”

On return to Ireland, Cronin had a brief spell at St Patrick’s Athletic before six seasons with Drogheda United, where he won the 2001/02 First Division. Three years at Bray Wanderers were then sandwiched by a couple of stints playing for Longford Town and it was here after retirement that the Dubliner became Tony Cousins’ assistant manager.

“It’s difficult in the League of Ireland to be given an opportunity. Tony pushed me and gave me the freedom to do more on the training pitch. We had a great relationship. He trusted me to do things and knew that I wanted to develop.”

Cronin went on to manage former club Bray for three and a half years, but then a merger with Cabinteely and new owners coming in, he felt it was the right time to step aside.

“I knew the merger was coming and that wasn’t for me. The right thing to do was move on. It was a difficult period because I thought we were building something. The time it was happening, as a manager, you’re dealing with other factors outside football, while trying to push for promotion.

"When news of the merger came out there were a lot of extra things to deal with in the dressing room. It’s happened, that’s their business now and good luck to them. A lot of Bray supporters weren’t happy and that’s since come to the fore. We’ll see how it develops.

"Sometimes ventures like that take time and perhaps things have to get worse before they improve and hopefully, that’s the case. There was an opportunity to coach there, but that wasn’t for me.”

Now in charge at another former club, Longford Town, Cronin believes that familiarity can be advantageous, given the right circumstances.

“I like that I’ve played for a club before because you understand what the football club’s about: their resources, how they operate. It was different at Bray because the people there, weren’t there when I played. At Longford, the chairman is still here and a lot of the board member who love the club.

"I think that most supporters like for a former player to manage their club because there’s a history and you can build on that foundation. At Longford, I felt that I was a few steps ahead because when I went back, there was a natural progression from player, coach, assistant manager and so on.

"Understanding what people want, need, the expectations, there was nothing new to learn. They know that I’m determined to try and win matches.”

Currently in the running for a play-off spot, Cronin accepts that an immediate return to the Premier Division  will be tough, coming up against clubs with bigger budgets in a traditionally tight league.

“James Keddy, my assistant, says that part-time lads have to be more professional than the full-time ones because they have more to handle. Recently we were in Limerick for a rearranged game, coming back at 1.30am and some of them were starting a 5.30am shift. That has to be managed really well and you have to have the right people to help with that.

"The First Division table doesn’t lie and the top three spots are occupied by full-time teams and that should be so. Rebuilding this group, I couldn’t guarantee much, but that we would be competitive because that’s the type of squad I was putting together. We’ve had two draws with Cork City, beaten Galway and drawn with Waterford.

"The title will more than likely go to one of those and then you have the play-offs to fight for. We are determined to try and break that trio up. It’s possible, but we have to start winning more games. Being part-time, you can use as an excuse, but our players don’t and do extra on the training ground, to try and catch up with our work ethic.

"We can only control what we do with our time and the resources at our disposal. So far it’s been a very tough league ... Against everybody, but we’ll be trying our best to make an upset come the end.”