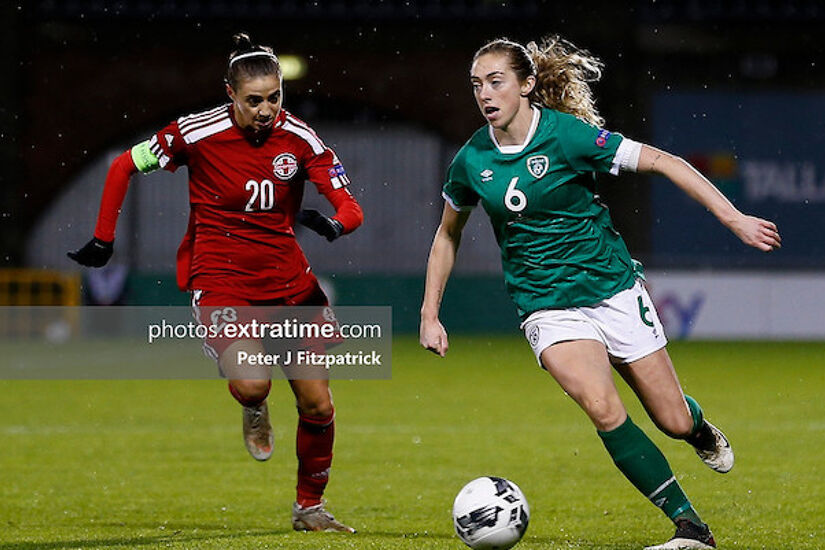 Megan Connolly put in a player of the match performance in Gori against Georgia Credit: Peter Fitzpatrick (ETPhotos)

It was a ruthless performance by Ireland who thumped Georgia in Gori 9-0 to set up the critical next home against Finland. Win that match in Tallaght against Finland on 1st September and Ireland will have a play-off to reach next year’s World Cup in Australia and New Zealand.

Katie McCabe grabbed a hat-trick, while Louise Quinn headed home twice in the second half and the superb Megan Connolly and Denise O’Sullivan also netting. Two players at different stages of their careers got their first international goals -  Niamh Fahey scored on her 104th international appearance while 17-year-old Abbie Larkin headed home her first.

Vera Pauw made three changes from the team who drew in Sweden in April. One of those was with September’s qualifiers in mind; Jamie Finn who was carrying two yellow cards into this game wasn’t included in the match day squad. Surprisingly Stephanie Roche was also omitted from the 23 – Amber Barrett got the nod to lead the Irish line.

It took till just the sixth minute for the girls in green to claim the opening goal in Gori. Both Connolly and Fahey needed to be physical to hold onto possession. Fahey’s tackle freed Heather Payne to get forward on the right.

She played the ball centrally to O’Sullivan and as the Georgian defence drifted towards the Cork player, she fed McCabe outside her. The Ireland skipper drilled the ball with her left by Tatia Gabunia for the opener. It was to be a busy night for the Georgian goalkeeper.

Fahey hit the century mark of international appearance earlier this year and in this game scored her first goal for Ireland – albeit with a touch that came off her hand. However, she had put herself in the right position to slot home Louise Quinn’s knock back from Connolly’s corner from the left.

The third came in the 18th minute when Connolly was perfectly placed to steer McCabe's corner from the right into the back of the net after it dropped right onto her right boot inside the six yard box. Connolly speaking after the game described Ireland’s performance as “ruthless) and thanked her skipper for the assist for her goal. She said: “It was put on a plate by Katie. I didn’t have to move. It was one of those days when everything goes right.

From their tenth corner iof the first half injury time, Ireland got their fourth. Connolly took the set piece to McCabe who was wide open on the edge of the area and her shot looped in to make it 4-0 at the break.

It took Ireland four minutes of the second period to add to their goal tally. Ireland recycled Connolly’s corner and when it came back to the Brighton & Hove Albion player she whipped it in to Louise Quinn to head home at the back post for her 14th international goal.

Pauw made a triple substitution just after the hour mark. Substitute Lily Agg, making her competitive debut for Ireland, had the ball in the back of the net just after her introduction but this time the goal was ruled out for handball as it bounced up to him her arm before she sent the ball goalwards.

Ireland added another two in two minutes with McCabe the provider with a free kick for Louise Quinn to get her second headed goal on 73 minutes. McCabe then completing her hat-trick getting in around the back to volley home Connolly’s cross.

The eighth goal was a Shelbourne combination as Larkin headed home her club teammate Jess Ziu’s header with the win wrapped up by O’Sullivan’s goal in injury time as Ireland hit the landmark of 20 goals from the two games against Georgia in this campaign.

With all three points, Ireland jumped above Finland and into second place in the table coming into the final two group games in September – home to Finland and away to Slovakia.